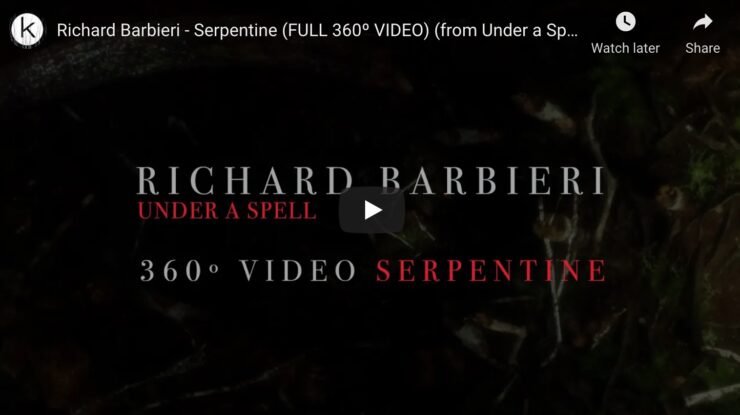 Under A Spell will be released on Kscope on February 26th on CD,

Richard Barbieri has shared new single ‘Serpentine’ – the first single from his upcoming solo album ‘Under A Spell’ due for release on the 26/02/21 through Kscope. Boasting a groundbreaking career that began in the late 70s with synth-pop visionaries Japan and more recently as a member of influential art-rock band Porcupine Tree, ‘Under A Spell’ is the first full length solo record from Richard Barbieri since 2017’s Planets + Persona.

The first song to be heard from ‘Under A Spell’, ‘Serpentine’ is a winding and expansive six-minute soundscape that weaves through multiple genres and ideas. Complex, calm- ing, engrossing and experimental, ‘Serpentine’ is the perfect primer for ‘Under a Spell’ – the work of a visionary musician working at his creative height.

The song is accompanied by a new 360 video created by Miles Skarin, allowing the viewer to travel along the floor of a foreboding forest, inspired by a nightmare Richard experienced and explained to the filmmaker.

Barbieri didn’t plan to make an album like Under A Spell, originally intending his fourth solo album to be a direct follow from its predecessor. That record, made in different studios across Europe and heavily incorporating live performances from a range of musicians, was adventurous and bold, showcasing Barbieri’s endlessly inventive song writing and mastery of electronic music. The follow-up would pick up where it left off, journeying further into the expansive terrain he mapped out on the previous record. And then the COVID-19 pandemic hit, and everything changed. “I wrote and recorded it in my studio at home, with all this strangeness going on outside,” says Barbieri of Under A Spell. “It became something completely different: this weird, self-contained dream-state album.”

Barbieri’s willingness to constantly redefine his own musical boundaries are never more evident than on the brilliant, hypnotic Under A Spell – the latest milestone on this utterly unique journey.

“Miles Skarin has created an amazing 360 degree video for the track “Serpentine” from my new album “Under A Spell”. It’s based on a vivid nightmare I experienced from the per- spective of a snake. He has created this dense forest where past spells and rituals are glimpsed, strange voices are heard and where danger lies ahead. Don’t keep to the path!

The track features a masterful bass arrangement from Percy Jones and the “hidden” voices of Lisen Rylander Love and Steve Hogarth.”

You can see the video here.

Viewing is recommended in Chrome or Safari and Firefox users may experience difficulties with the 360 elements. A VR headset will greatly improve the experience and we would recommend viewers with VR headsets to use them.