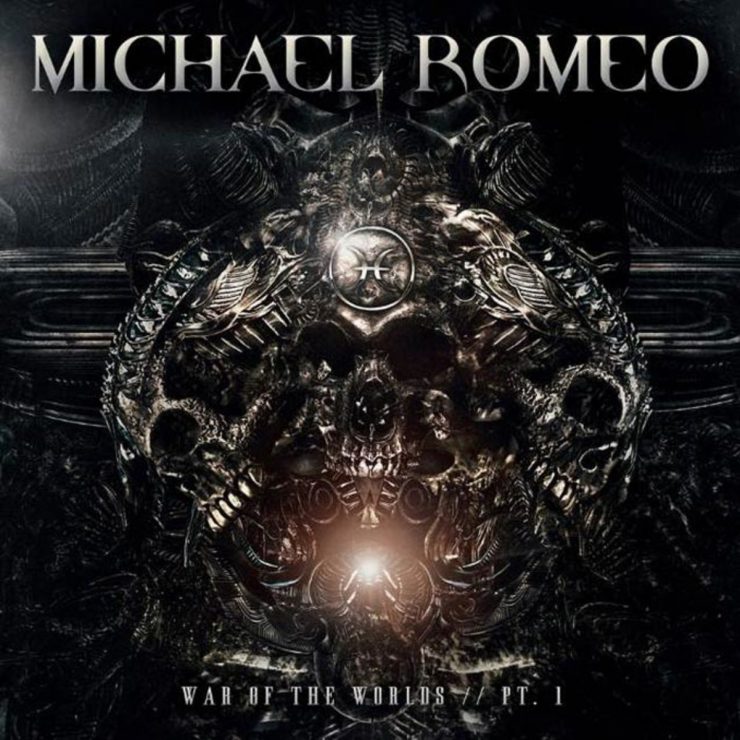 Michael Romeo is a household name amongst the Prog Metal genre, better known for being the mastermind behind Symphony X. Having released many incredible records with the band over the years, Romeo decided to put out a solo album after more than 20 years since his original demo “The Dark Chapter”. War of the Worlds // Pt. 1 serves as a great opportunity for Romeo to work with musicians he has always wanted to work with. The lineup for this album features John Macaluso on drums, John “JD” DeServio on bass and Rick Castellano on vocals, who co-wrote lyrics with Romeo. Romeo took care of all guitars, keyboards and orchestration as expected.

Lyrically, the concept behind the album is “conflict”, or as Romeo puts it, “them against us”, which can be interpreted in many ways. Musically, the album finds Romeo going all out on everything he loves about music and mixing them together. The heaviness, melodies, riffs, shredding are all here as expected but the orchestra elements are more pronounced than ever.

Instrumental intros are a staple not only on Romeo’s albums but to concept albums and in Prog in general. But it wouldn’t be fair if I didn’t mention that he always does an incredible job with them. The Introduction to War of the Worlds // Pt. 1 starts off with dark, eerie strings to introduce one of the recurring motifs in the album until it transforms into a whole different beast. Romeo appears with his first riff, soon to be followed by the other instruments coming with total force. The buildup in this song is done phenomenally as it progressively gets faster and heavier. It’s a taste for what’s about to come.

The heavy-hitter “Fear the Unknown” is next on the list. This one feels familiar yet very different, in the sense that this could very well have been a Symphony X song if Romeo wanted to. The riffs, chorus and the way it’s structured feel similar, but there’s a catch: Rick Castellano on vocals makes the whole thing have a very distinct feeling. He nails the style that Romeo wanted for this song (and album!) and his delivery is just fantastic.

“Black” was chosen to be the single for this album and it’s easy to see why. It starts off with the orchestra very present and then transitions to the main riff – fast, precise and very Romeo-esque. The chorus is excellent, as is the instrumental section with one of the many solos that will blow your mind .

Speaking of blowing minds, let’s talk about “Fu**ing Robots.” Until this point in the album, we are getting used to the guitar vs. orchestra combo. Romeo decided to twist the plot and insert EDM/dubstep elements in a very unconventional way together with those two. If you thought he was just following that formula, this combo is here to prove you otherwise. The track features only one vocal section mixed with the main riff but all of it sounds huge, immersive and on par with the concept. This song is fu**ing crazy alright and is one of the highlights of the album for sure!

Important to note about Romeo’s attention to detail is that he made sure that all the tracks transitioned seamlessly. My favorite instance of this is from the previous track to “Djinn,” an extraordinary track on its own too. This song feels like a journey – extremely heavy, yet melodic. Probably my favorite chorus in the record, which is reprised in a guitar solo leading to another nutty instrumental section and in the ending too. The Eastern/Arabic-inspired melody featured in the middle sung by Castellano is one of the highlights.

The longest song in the record, “Believe,” is also the closest we’ll get to a ballad. It begins with a solo piano accompanied by the album’s main theme building on guitar and strings. Then it shifts to the main part of the song, Castellano’s soft vocals paired with the piano, later joined by the rest of the band. This song is beautiful and it grows bigger with the lyrics that are some of my favorites on the record too. It doesn’t escape from an instrumental section, although it’s very unlike the others. This time, it’s heavily focused on the orchestra and reprising the main theme many times while shifting tones, twists and turns, odd time signatures and playing with the listener’s expectations. Romeo went all out with this track, it’s like a shorter take on “The Odyssey!”

To contrast what came before, “Differences” is the fastest song in the record. This song is a high energy shred fest. Every one of the players are shining, even during the chorus Romeo is tapping his guitar like a mad man. Needless to say his solo in this song is insane and probably the best in the album (it’s a hard decision to make).

“War Machine” is a short instrumental track that perfectly fits the tone of War of the Worlds. You can feel the sense of “conflict” in the way the orchestra is played and between all sections. Heavily centered around the main theme but with a bunch of unexpected methods of moving on with the song. If you need to show someone what this album is all about but don’t have a lot of time, this is the way to go.

Fading from a distance, the main riff of “Oblivion” comes through and it’s a total banger. This is a very powerful song that I believe would work perfectly in a live setting. Both of its solos are stunning and just show how Romeo is capable of constantly reinventing himself in the guitar world with newer techniques while staying fresh and surprising.

Closing track “Constellations” covers many styles and previously featured themes from the record. It starts with a piano + vocals combo piece and then move on to a very heavy instrumental section centered on the main theme of the album with an incredible buildup. The last section is as epic as an anthem, a heavier and more orchestrated version of the chorus we heard in the beginning of this song. Then, the album closes with an acoustic version of the first guitar riff we heard… good thing this is just “Pt. 1”!

While Romeo definitely featured some elements from his compositions in Symphony X, it’s safe to say that what he achieved here has its own identity. War of the Worlds // Pt. 1 gives Romeo more freedom and space to work with and it’s definitely a breath of fresh air for every one of his fans. There are many surprises in this album and a lot of focus to Romeo’s homage to his film score heroes as well.
There are many reasons to be excited for this record, doesn’t matter if you’re already a veteran Symphony X fan or never heard of him before. But after listening to it many times, I believe the main reason to be excited for it is that War of the World // Pt. 1 will have a Pt. 2 and I can’t wait to listen to it – and this says a lot about the album.