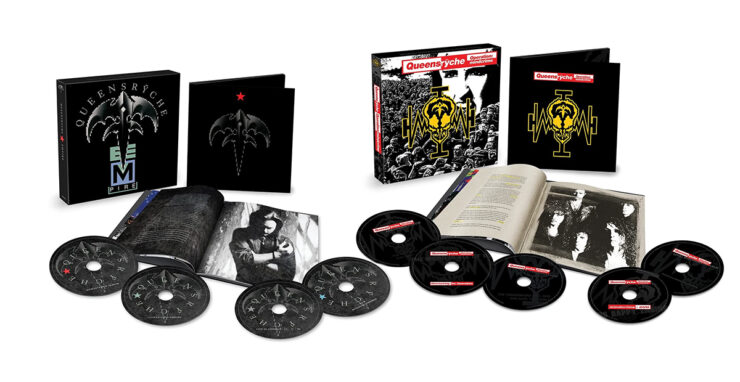 On June 25, Queensrÿche will release remastered versions of Operation: Mindcrime and its successful follow-up, Empire.

On June 25, Capitol/UMe celebrates two landmark progressive metal albums by Queensrÿche. The breakthrough collection Operation: Mindcrime and its successful follow-up, Empire, will be released in multiple formats. In addition to the original versions remastered for CD and 180-gram vinyl 2LP, both titles will be available in expanded 2CD editions and in multi-disc CD+DVD box sets that stand as the final word on these albums, which carried the ambitious conceptual approach of such artists as The Who and Pink Floyd to a new decade and to a new hard rock audience.

Newly mastered at Abbey Road Studios, the deluxe versions of these remarkable albums bring together all the available recordings in 10″ x 10″ boxes that also contain DVDs of accompanying promotional videos and live performances of the albums. The live audio material revisits Queensrÿche’s worldwide headlining status during the Building Empires Tour, an 18-month trek that saw the band headline arenas after previous high-profile supporting slots on the Def Leppard Hysteria and Metallica And Justice For All tours. The Operation: Mindcrime deluxe features live audio concerts from London’s Hammersmith Odeon in 1990 and Wisconsin’s Target Center in 1991, plus a DVD that also includes the bonus track “The Making of Operation: Mindcrime” and an Operation: Mindcrime TV spot. The Empire deluxe version completes the Hammersmith Odeon 1990 concert with the live audio from the non-Mindcrime setlist. Geoff Tate, inducted into the 2020 Metal Hall of Fame, sheds new light on Operation: Mindcrime and Empire in extended interviews with noted journalist Alex Milas for the liner notes.

The deluxe versions of Operation: Mindcrime (originally released May 1988) and Empire (originally released August 1990) are available for preorder now. Ahead of – and leading up to – the releases, the celebration of these comprehensive box sets and releases includes a weekly premiere of remastered high-definition video on Queensrÿche’s official YouTube channel. With its sinister backdrops, a dramatic unfolding of characters and Queensrÿche’s high-octane stage performance, the “Operation: Mindcrime” HD remastered video, available now (see below), provides a glimpse into the album’s intricate concept. The HD remastered video rollout for Operation: Mindcrime continues with “Eyes Of A Stranger” (May 14) and Grammy-nominated single for Best Metal Performance “I Don’t Believe In Love” (May 21), all of which bring the plot to life. HD remastered video premieres from Empire are the title track, “Empire,” (May 28), “Best I Can” (June 4), “Anybody Listening?” (June 11), the Grammy-nominated No. 1 rock hit “Silent Lucidity” (June 18) and, on release day, June 25, remastered HD videos will premiere for two more fan favorites “Another Rainy Night (Without You)” and “Jet City Woman.”