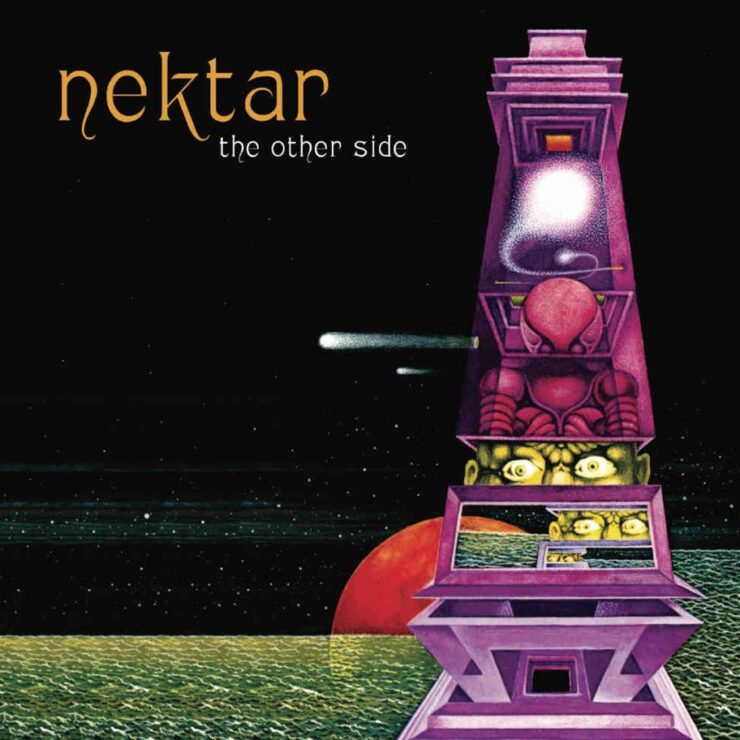 Esoteric Antenna is delighted to announce the release of the stunning new studio album by the legendary band Nektar. Throughout the 1970s Nektar released a series of acclaimed albums, scoring chart success in Germany (where the British band was based) and later in the USA (where the band relocated). Following the passing of original guitarist / vocalist Roye Albrighton in 2016, fellow founder members Derek “Mo” Moore (bass, vocals), Ron Howden (drums, vocals) & Mick Brockett (lyrics, visual conceptions) reunited in late 2018 along with Randy Dembo (bass, 12-string guitar), Ryche Chlanda (guitar, vocals) & Kendall Scott (keyboards) to begin work on a new album.

Ryche Chlanda originally recorded with Nektar in 1978, and for “The Other Side” the band updated some of those ideas which evolved in the basement of Mo Moore’s house in Chatham, New Jersey. Ron Howden, Mo and Ryche collaborated on much of the music heard on the album. The 1978 unrecorded song “Skypilot” has evolved into “Skywriter” in 2020. With new lyrics by Mick, Mo and Ryche

“I’m On Fire” is the musical adaptation of a poem written by Mo for his soon-to-be wife, Nicki, during that same time period of 1978. The closing track, “Devil’s Door”, was originally performed live in 1974, but never featured on a Nektar album. Updated and recorded for this album, the song features the presence of the late Roye Albrighton on the introduction to the track, whose wonderful guitar part was taken from a live soundboard recording made in 1974.

Kendall Scott’s distinctive & versatile keyboard presence has enhanced this considerably, whilst Randy Dembo, who originally joined Nektar in 2004, brings a uniting presence on 12-string and bass guitars, rounding out the instrumental arrangements. Ron Howden has been a continual driving force of the band, weathering all versions of Nektar since its conception in 1969. With Mick Brockett now back in the fold (with his visual concepts and ideas as an essential part of the band making the music and light theatre a reality). “The Other Side” is a stunning album from a legendary band.