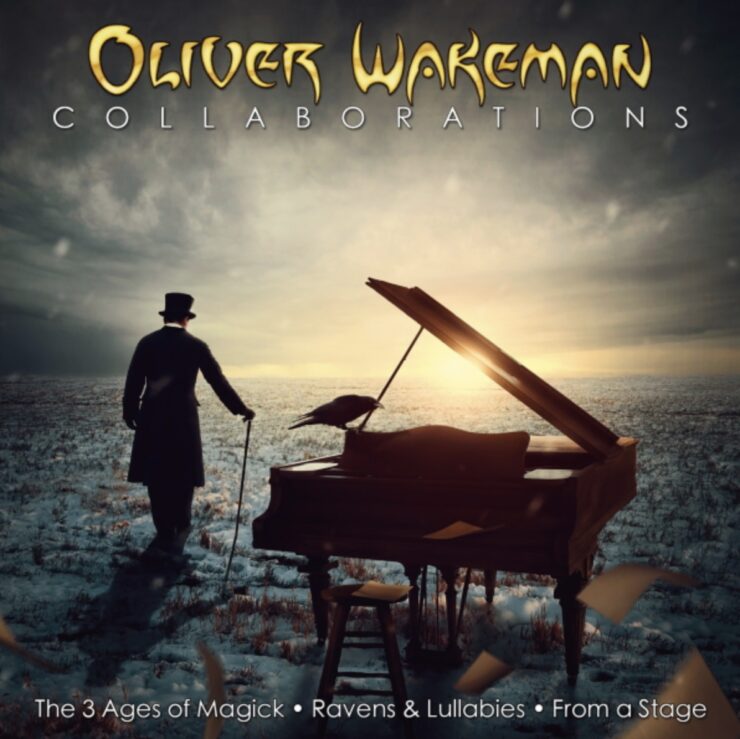 Oliver Wakeman has the honor of being one of the few musicians to have performed and recorded with some of Prog Rock’s most respected guitarists.

Back in 2001, many years before he became a member of YES, Oliver and guitarist Steve Howe worked together on the “The 3 Ages of Magick” album. Supplemented by an array of talented musicians, this album became a hidden gem in the YES family tree of recordings.

Following his tenure in the keyboard seat for YES in from 2008 to 2011, Oliver teamed up with another British guitar legend, Gordon Giltrap, to record their award winning “Ravens & Lullabies” album, a collection of rock and acoustic tracks featuring the singers Paul Manzi (SWEET) and Benoit David (YES).

20 years following its original release, “The 3 Ages of Magick” is teamed with the album “Ravens & Lullabies” in the new “Collaborations” 3CD Box Set. Including remastered versions of both albums along with the previously unreleased acoustic live album, “From a Stage” features music from Wakeman & Giltrap’s many years of performing together across the UK.

The “Collaborations” box set, comprising 3CDs each with a 16-page booklet and individual art prints of the sleeves, will be released by Burning Shed on 11th April.

“The 3 Ages of Magick”, released in 2001, is an instrumental album based in the style of the great 70’s prog solo records. Featuring Steve Howe across 11 of its 13 tracks, the album is both gentle and outlandish in equal measure. The album, based on stories from British folklore, utilises traditional instruments to help tell each story. This remastered version also includes 3 bonus tracks not available on the original release.

10 years later, Oliver and another legendary guitarist, Gordon Giltrap, joined forces after meeting at one of his father’s (Rick Wakeman) Christmas concerts in which they both performed.

“Ravens & Lullabies” allowed Oliver and Gordon to intertwine their acoustic musical abilities in the Lullabies section of the record. The Ravens aspect of the album allowed Gordon to be re-introduced to the Prog community in which he had been a leading figure during his heyday when releasing albums such as “Fear Of The Dark” and “Perilous Journey” (which contained his hit song “Heartsong”). This remastered version also features the bonus studio tracks, “The Forgotten King”, “Bach’s Praeludium” and a new version of Gordon’s classic “Roots” which were only included on the limited-edition double disc release of the original. Also included is a new recording, a piano and classical guitar version of Oliver’s track “The Wedding Approaches”.

This box set package also includes a third disc, “From a Stage”. During the lockdown, Oliver was approached by the sound engineer from one of the Giltrap/Wakeman concerts to say he had found a multitrack recording from a Christmas concert Oliver and Gordon had performed at along with special guest Paul Manzi (SWEET). This allowed a great opportunity to put together the live album “From a Stage” featuring Oliver and Gordon’s interpretations of songs from their collective 20+ years of back catalogues. Including the warmth and musical interplay that became a trademark for their often sold out shows, the recording features songs such as “Heartsong”, “Glimmer of Light” & “Roots”.

The “Collaborations” box set contains 3 CDs each with 16-page booklets including lyrics, previously unseen artwork and many stories behind the creativity of Wakeman and Giltrap. The first 250 box sets will also include the 4th art print of the box set cover numbered and signed by Oliver Wakeman.

A lyric video “Moneyfacturing” from the box set, is now available to view on YouTube. The track is taken from the Wakeman/Giltrap “Ravens & Lullabies” record in the box set and features Paul Manzi (SWEET)

Oliver says: “This is one of my personal favourite band tracks I have ever written and recorded, allowing me to make use of a lot of my collection of keyboards. It is a radio-friendly song which also reminds people what a great electric guitar player Gordon is!”

“Collaborations” will be released by Burning Shed on April 11th.

You can pre-order the set here: https://burningshed.com/store/oliverwakeman