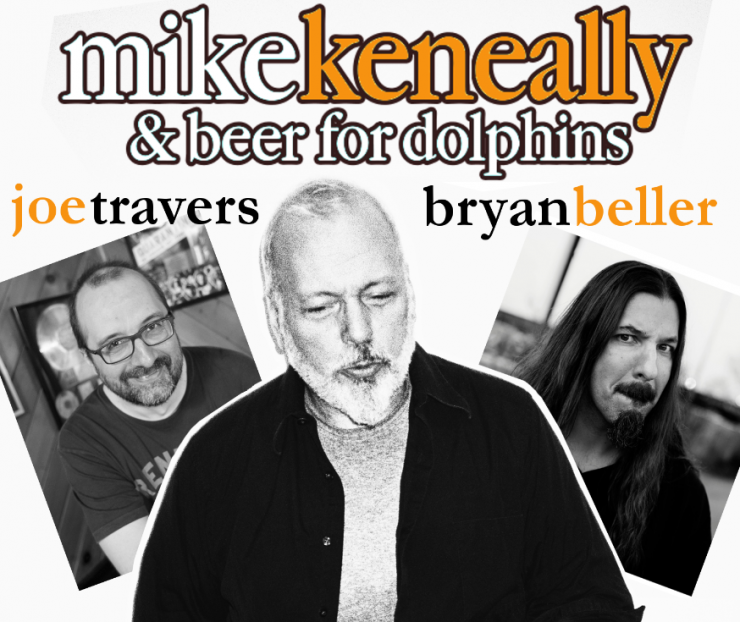 Classic trio configuration to play Northeast and Midwest dates for the first time since forming in the 1990s!

MIKE KENEALLY & BEER FOR DOLPHINS classic trio configuration to play Northeast and Midwest dates for the first time since forming in the 1990s!

Mike Keneally (guitarist/keyboardist/vocalist) has been playing with Joe Travers (drums) and Bryan Beller (bass) since 1993, when they were members of the Dweezil and Ahmet Zappa band Z. Throughout the 90s, as Mike Keneally & Beer For Dolphins, they played frequently on the West Coast in support of Keneally’s solo albums hat., Boil That Dust Speck and Sluggo! Although Keneally has worked with countless brilliant musicians throughout his solo career, fans have long held a special appreciation for the high energy, humor, camaraderie and virtuosity of the Keneally/Beller/Travers triumvirate. Now finally, after more than two decades, this powerful trio version of MK/BFD is coming to states in the Midwest and Northeast of the US, and playing music covering the gamut of Keneally’s career, from those classic 90s releases all the way up to the brand new Scambot 2.

Mike: “I was a bit stunned to realize that this particular configuration, with whom I gigged so much in California in the ’90s, has never played in the Midwest and Northeast as a trio. There is a certain ferociousness that takes hold on when it’s just me, Bryan and Joe, and it’s going to be fun to finally bring that vibe to the other side of the country for once.”

Mike Keneally has played with Frank Zappa, Steve Vai and many others, in addition to his long-standing solo career. He and Bryan Beller currently play together in Joe Satriani’s band, and have toured extensively in the metal band Dethklok. Beller is also a member of the instrumental juggernaut The Aristocrats. Joe Travers, in addition to past drumming duties with Zappa Plays Zappa and Duran Duran, has held the position of Vaultmeister for the Zappa Family Trust since the 90s, exhuming unreleased Frank Zappa tapes for release to the public. http://www.keneally.com

17 years in the making, Scambot 2 is the long-awaited sequel to the 2009 release Scambot 1. As Mike says:

“Scambot 1 was a dense, mostly instrumental and pretty darn abstract listen, so Scambot 2 may take you by surprise with its more melodic and accessible (for me, anyway) nature. I really wanted to write a bunch of songs, as opposed to compose a bunch of pieces, and that’s what happened. From the multi-movement epic “In The Trees” to the rocking “Roots Twist” and “Roll” to the lilting “Sam” to the twangy “Constructed” to the proggity “Buzz” and “Clipper” to the…well I’ll stop describing the songs, you’ll hear them soon enough I hope.”

Scambot 2 is currently available for pre-order as a special double-CD set consisting of the Scambot 2 album (65 minutes of music) and the Inkling album (48 minutes of music) in a handsome digi-pak with two booklets. It will go into wider release through other distributors and retailers starting September 9th 2016.

In a tribute to Keith Emerson, also featuring Jonathan Schang of District 97 and Luis Nasser of Sonus Umbra and Might Could