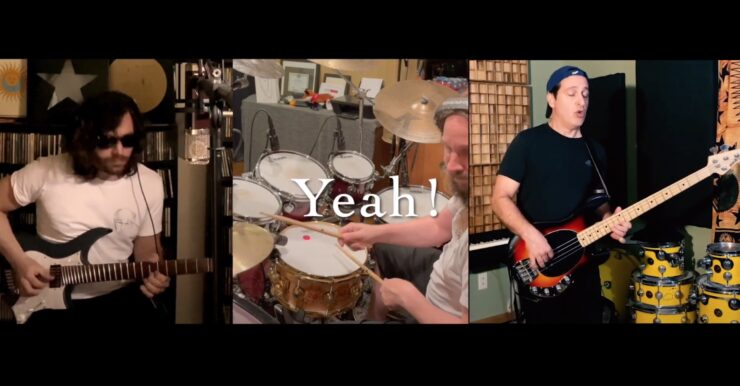 The trio will play a live show together as McStine & Minnemann & D’Virgilio at ProgStock, on Saturday, October 2nd, 2021, in Rahway, NJ.

McStine & Minnemann  the duo comprised of multi-instrumentalists Randy McStine (Lo-Fi Resistance) and Marco Minnemann (The Aristocrats) – will join forces with Nick D’Virgilio (Big Big Train) as a trio to play a live show together as McStine & Minnemann & D’Virgilio at ProgStock, on Saturday, October 2nd, 2021, in Rahway, NJ. A short music video of the trio announcing the performance can be seen below.

“Good and rewarding news! It feels great not only seeing our new McStine & Minnemann material coming to life and receiving such a warm welcome in the music world, but furthermore, now being joined by our dear friend and fellow multi-instrumentalist/composer, Nick D’Virgilio,” says Minnemann.

D’Virgilio adds, “I am super excited about sharing the stage with two men I consider to be musical superpowers. Not only will this be fun, but super challenging as well, and I love when those two things come together. For those that get the chance to witness this special event, it will be something really special. I can’t wait!!!”

The upcoming performance will be their first time together as a unit, but the connection between Marco Minnemann, Nick D’Virgilio, and Randy McStine has deep roots within a diverse family tree of musicians. Sprawled over decades, they have crossed paths with a multitude of artists in different genres, many of which eventually brought them in direct collaborations with each other.

“A condensed history is something like this…”, McStine begins to explain. “My musical and personal bond with Nick (D’Virgilio) started with my first album under the name Lo-Fi Resistance in 2009. Lo-Fi Resistance caught the attention of Dave Kerzner (Sound Of Contact), which led to Dave and I working together on a record and a bunch of things through the years. One of those projects, In Continuum, featured Marco (Minnemann), Nick, and myself extensively on the recordings. I didn’t know Marco personally at that point, but the opportunity for In Continuum to play a live gig put the two of us in a rehearsal room and on a stage together for the first time in October 2018. That gig was at ProgStock, which is the very festival where our duo, McStine & Minnemann, will expand and debut as a trio with Nick!”

ProgStock, the American Northeast’s Only International Progressive Rock Festival, returns to the stage for its fifth straight year, October 1st through October 3rd, 2021 at Hamilton Stage at UCPAC in Rahway, NJ. Details about the festival (including a live-streaming option for the performance) can be found at www.progstock.com.

Randy McStine recently joined Roie Avin and Geoff Bailie on The Prog Report podcast discussing the Ultimate Pink Floyd Album which you can check out here.