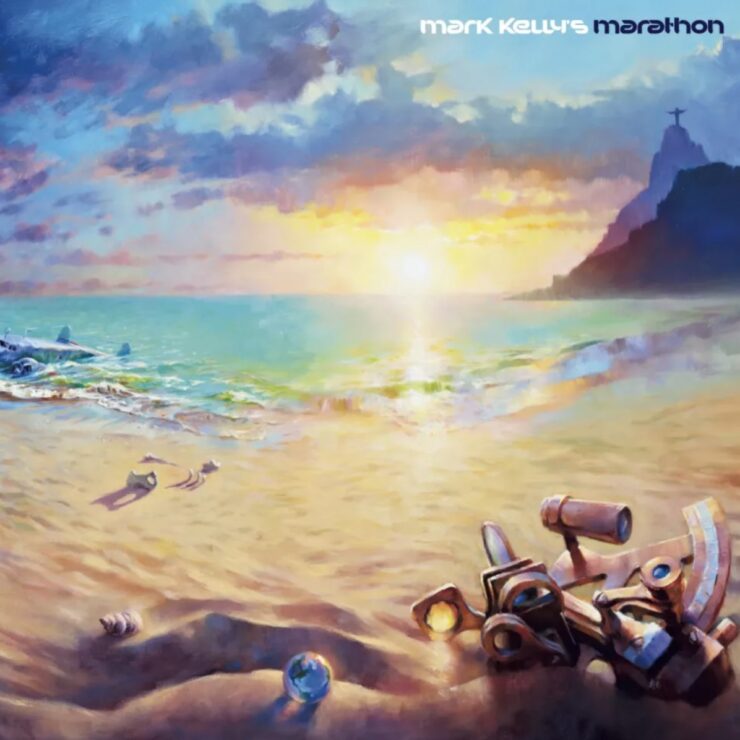 Mark Kelly is a resourceful fellow. Marillion’s keyboardist was, amongst other things, the main architect behind his band’s ground-breaking crowd-funding music business model, introduced many years ago. Kelly has shown no less innovation in his own music with the side project Marathon. The group’s debut album, titled ‘Mark Kelly’s Marathon’, has been thirty years in the making for Kelly, and was announced during September’s Marillion Couch Convention (the 2020 Lockdown version of the Marillion Weekend.)

With a central concept based on flight, space travel and exploration, the album’s theme is used as an allegory for human communication breakdown. These might be weighty themes, but the music accompanying them is generally quite pleasant, sometimes light, and always very melodic. Every lyric can be heard with clarity, and the production of the album is open, clear and, well, spacey.

The musicians involved may not be quite as iconic in reputation as their leader, but they are not to be underestimated. In particular, Smith is an excellent vocalist whose rich voice sounds uncannily like a cross between John Mitchell and Peter Gabriel. One would think that this is no coincidence, and that Kelly probably selected him for that very reason. Rogers, best-known for his work with Touchstone and Edison’s Children, is a top-notch drummer who is at his most restrained and tasteful on this album. Wood, Cordy and Connal Kelly all provide just the right mixture of feel and technicality, and the combined results are consistently pleasing.

Divided into two broad segments entitled “Amelia” and “2051,” the album firstly offers the story of pilot Amelia Earhart and then a sci-fi tale of technological breakdown in space. The ten constituent songs consistently reference the allegory of human distance and communication breakdown.

Each song boasts a different strength, but you will need to invest in each to find the magic. Do not be misled by the more pedestrian moments – while they are no doubt there, your patience will, generally speaking, be rewarded. “When I Fell,” for example, starts out as quite ordinary, until Kelly’s cosmic keyboard solo reminds us why he is who he is. It may sound like Marillion, but this is, of course, to be expected. Puppets’, featuring a typical Rothery solo, is also reminiscent of early Marillion.

Not all of the album’s strengths are of the Prog variety, however. “This Time”, for instance, is straight-ahead pop with a catchy chorus that would not be out of place on a Mike and the Mechanics album. Kelly’s admiration for the pop of The Beatles is also to be heard at several points, including “Amelia.”

Of course, the Progressive balance is restored with “2051,” a 15-minute Prog epic that comes complete with a cinematic, sci-fi theme and sound effects. Vickers’ lyrics are particularly contemplative of humanity on this one, opening with the line: ‘We think you’d like our planet. We’ve got Richard Strauss and The Beatles and Scooby-Doo. Who else can say that?’ The adventure then begins with the line ‘Sipping Mai-tai’s at Trader Vic’s, trying to put the cart before the horse…If we left here tomorrow, where the hell would we go?’ From there, the song quite literally goes on an exploration, both musically and lyrically. It is quite reminiscent of Lonely Robot in places – a statement that is meant as the highest compliment. There is a Moog moment that will take you back to the days of ‘Garden Party’, there are several excellent guitar solos and there is a strident climax. Smith’s voice is tested at both ends of the spectrum and Conal Kelly’s excellent bass-lines often sound similar to those of a certain Mr Trewavas. It all comes together in a great Prog climax that fades into the ether to end the album.

‘Mark Kelly’s Marathon’ will be released on CD, vinyl and a limited edition CD+DVD (the latter being a live performance of the whole album filmed at Real World, with added behind-the-scenes footage.)

This album has many excellent moments, and will, overall, satisfy Marillion’s massive fan-base and a host of new listeners. It is, at the same time, both an unsurprising record and a surprising one. The good surprises far outweigh the bad ones, and the album is therefore most certainly recommended as deserving of your attention and investment.