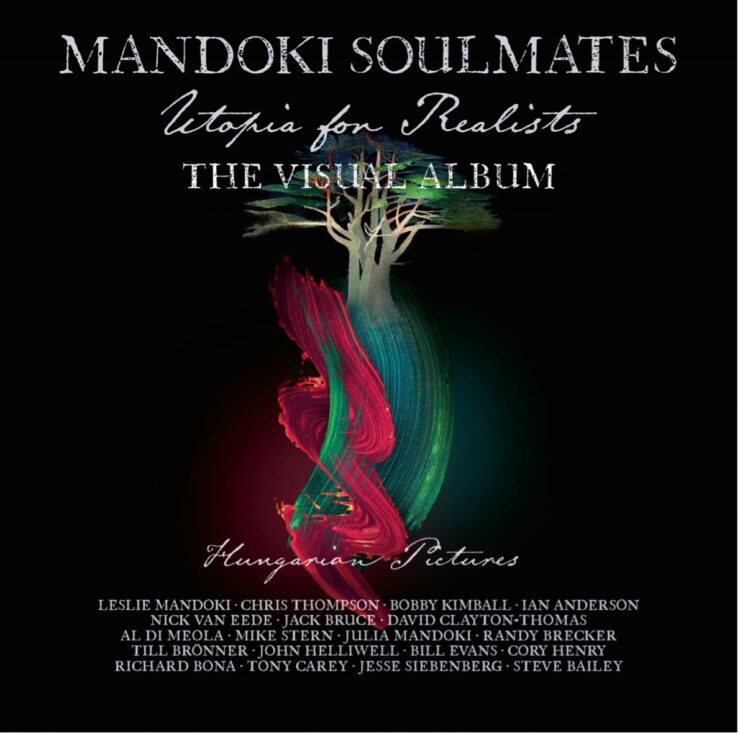 InsideOutMusic recently announced the signing of Mandoki Soulmates, featuring renowned musician, songwriter and producer Leslie Mándoki. On the 24th September, a brand-new expanded version of his ‘Hungarian Pictures’ suite, will be released under the title: ‘Utopia For Realists: Hungarian Pictures’.

Alongside the original remixed and remastered music, a brand new Blu-ray audio-visual album will be released, combining the recording of the concert film of the 30th anniversary of the fall of the Berlin Wall with an impressive cinematic realization of the individual musical episodes. It also provides exclusive insights behind the scenes of the Soulmates production live and in the studio, a “making of”. The album will also be released as a standalone Gatefold 2LP+CD+LP-Booklet, and a standard CD jewelcase.

Mandoki Soulmates staged a global live stream event earlier this year which has achieved over half a million plays on Youtube and over 700.000 on Germany’s leading TV channel ARD since its release. Watch it in full here:

The Prog Rock Suite ‘Hungarian Pictures’ as a live concert film, supplemented by studio recordings, films and a comprehensive making-of documentary combined into a holistic audiovisual work of art, is further proof of the indomitable creativity of Leslie Mandoki
and his soulmates.

Background on ‘Hungarian Pictures’:
‘Hungarian Pictures’ is constructed as a suite, based on compositions and themes by
Bartók, supplemented with the bands original songs. Together with Greg Lake of Emerson Lake & Palmer, and Jon Lord of Deep Purple, Leslie had worked on the seed of this idea years ago.

Leslie explains:
“For Bartók, diversity in culture creates enrichment. He believed that it is precisely from these differences that art draws the strength that enables further development. He
mixed sounds and traditional melodies from different regions of the Carpathian Plain in order to set an example against the burgeoning threat of National Socialism (Nazism) through the unifying aspects of music. That unifying impulse inspired Jon Lord, Greg Lake, and me.

After completing our Mandoki Soulmates “Wings Of Freedom” tour through Europe, we gave a concert in New York’s Beacon Theater. The Soulmates show was a great success with an enthusiastic New York audience, standing ovations, and positive press reviews.

For me, a former asylum seeker who over four decades ago fled from a communist dictatorship to freedom, this success in the “Land of the Free” is a very special moment.
After the concert, I spent a few days with my children in Van Morrison’s former house in
Topanga Canyon, one of the old “hippie” neighborhoods of Los Angeles. I used this free time to reflect on social developments over the past few years.

It became clear to me that we as artists are being challenged to become louder, to be a thorn in the side of society, and to bring progressive jazz rock back to real socio-political relevance. This is how the first ideas for a new album came about. It is the most ambitious and best project we ever worked on.”