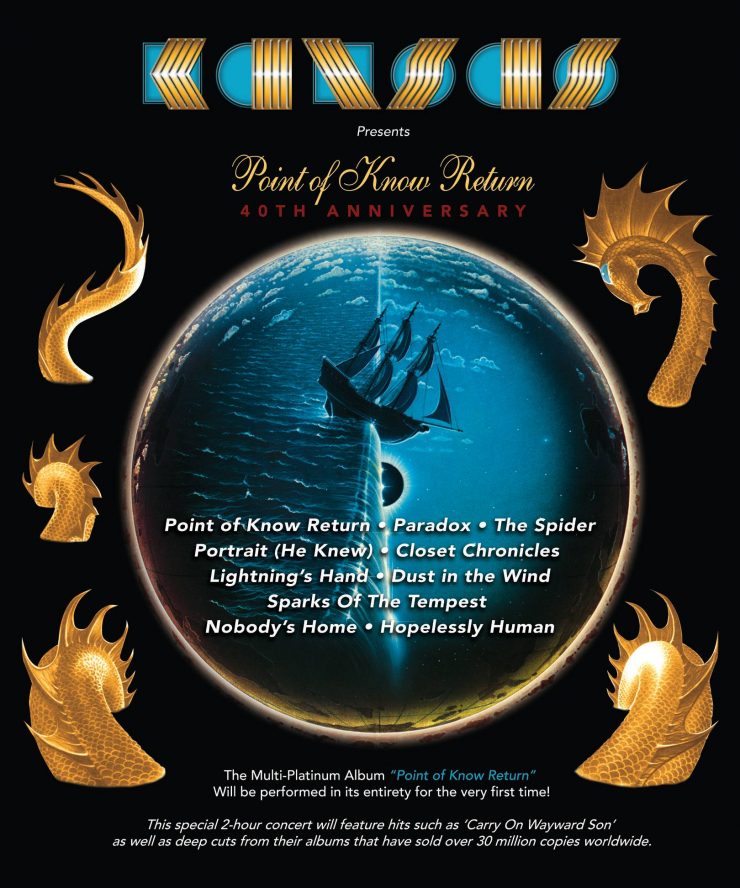 The tour will showcase more than two hours of classic KANSAS music including hit songs, deep cuts, and fan favorites.

America’s preeminent progressive rock band, KANSAS, will be touring select U.S. cities this fall celebrating the 40th Anniversary of their massive hit album Point of Know Return. To celebrate, for the first time in history, the band will be performing the album in its entirety. The tour will showcase more than two hours of classic KANSAS music including hit songs, deep cuts, and fan favorites.

Tickets and KANSAS VIP Packages for most dates go on sale to the general public Friday, March 23, 2018. Ticket information can be found at www.kansasband.com.

In 1977, KANSAS followed up the success of Leftoverture by releasing the album Point of Know Return. Containing the smash hit and million-selling single “Dust in the Wind,” along with fan favorites such as “Portrait (He Knew),” “Closet Chronicles,” and “Paradox,” Point of Know Return became the band’s greatest selling album. The album peaked at #4 on Billboard’s Album charts, reached sextuple-platinum status with more than six million copies sold, and had three Billboard Hot 100 singles.

Throughout the tour, live shows will not only culminate with the album Point of Know Return performed in its entirety, but KANSAS will also perform classic hits, deep cuts, and fan favorites. The band has not publicly performed some songs in the more than two-hour KANSAS musical event in decades, if ever.

KANSAS lead vocalist Ronnie Platt adds, “I often joke that I cannot be in charge of putting together a set list, because there are too many songs that I really want to perform. These shows, though, will be about as close as it gets. Of course, there will be hits like ‘Carry On Wayward Son,’ but to know we will be performing songs that KANSAS has not performed live for twenty or thirty years, or even ever, that is just really exciting. It is going to be a lot of fun.”

PS – If you read this far, the passcode for the fan club pre-sale starting at 10AM on Tuesday, March 20 is KANSASBAND.