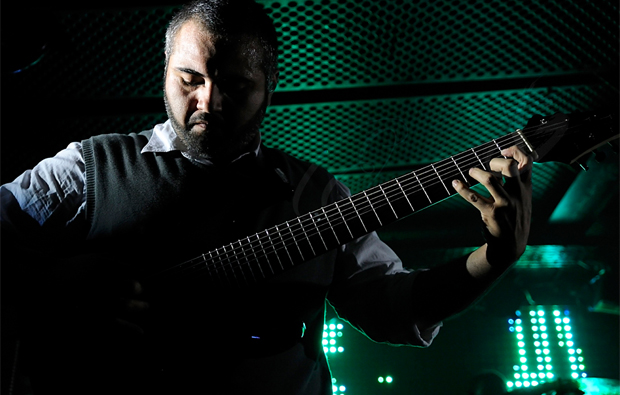 Javier Reyes from Animals as Leaders talks about the making and success of their new album, The Joy of Motion, his switch to Carvin guitars, how they prepare for live shows and his influences.

Here is an excerpt.  For the full Audio interview click the link below or download the podcast in iTunes.

The new album debuting in the Top 25 for an instrumental Prog metal band must have blown your mind.

Yeah, its pretty cool.  Obviously the numbers look amazing.  We’re just blown away already with what we’ve achieved.  The fact that it still keeps growing is mind blowing.  The fact that it debuted at #23 on Billboard was a huge surprise and apparently it did better than a lot of other bands that came out around the same time.

It seems like there is more of a live feel on this album.  You guys used acoustic drums?

Correct, those are real drums.  I think there is essentially little to no sampling on that.  The bulk of the drums you hear is real drums, just properly mixed.

So did you record most of the tracks live together or was it still multi-tracked?

It was still very multi-tracked similar to the way we’ve done other albums where everything was done on the computer first.  We demo the songs first, wrote them on the computer, programmed all the drums.  Once that was done, we actually re-recorded all the guitars to have the final takes and once that was done we went in to the studio to do the drums.  Once the drums were recorded, we added bass and then solos and the last thing that was added was the electronics.

Were the guitars recorded direct input again or did you use amps?

We did a slight hybrid of it.  We did do the direct Axe-FX thing that we normally do but what we did in order to capture our live sound was to tone match our Port City Amps with the Axe-FX.   So it has the tone match feature that is awesome.  We were using these Port City Boutique Amps and Cabs that we really like and we thought were adding to the sound that we were having.  We were using them live and our sound engineer was just like “this is the best you guys have sounded going through these amps.”  So we became fans of that tone.  So we wanted to capture that as well using the Axe-FX and using that on the album to help create a more unique quality to the band.  So instead of having to design something from scratch we literally just Tone Matched it and used that for the entire album.  And it’s actually what we are using now live.

Do you ever miss playing on a 6-string?

I play 6-string when I do my Nylon  but when I play electric I’m kind of used to doing 8-string now.  Whenever I grab a 6 I feel like I don’t know how to play.