Interview with Away from Voivod on the new album The Wake 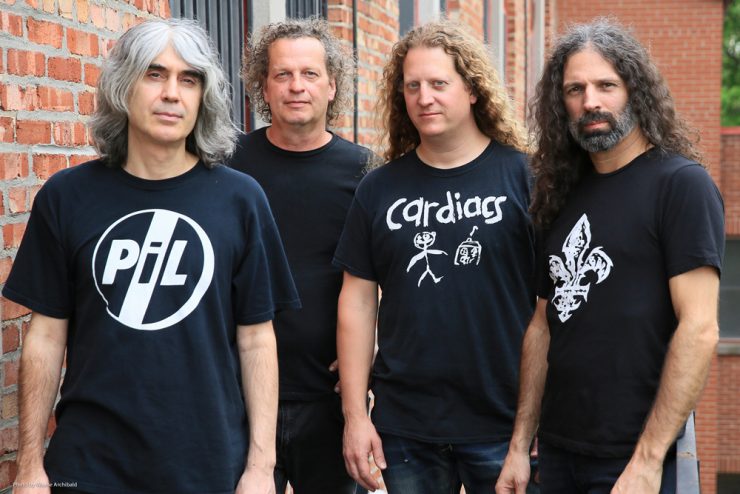 We talk with Away on the new Voivod album The Wake

One of the band’s generating the biggest buzz withe their latest album is Voivod, who return with their 14th studio album, The Wake, out on Sept. 21st on Century Media Records. We recently caught up with one of the band’s founding members, Away, for a chat on the new album.

The Wake is your 14th studio album, is the excitement still the same, do you still get that rush about putting out an album and having the fans hear it?

Away: Yeah there’s a mixture of excitement, a bit of anxiety, but the response has been amazing for the first single, so it’s a good indication for us for sure.

Being in the band now you’re over 35 years since the first album, are you surprised about the response?

Away: Yeah it’s it’s been up uphill ever since we reformed in 2008. There’s a real good momentum right now. The first video for “obsolete beings” got a lot of views, more than singles were released for the Post Society EP. Like right now we’re doing festivals, but the real work is going to start when the album comes out in September when we’ll do a worldwide tour right.

What can fans expect when they get this, classic Voivod is there something new in it?

Away: It has all the classic Voivod signatures but it’s a lot more progressive rock than the last few things we did, sort of reminiscent of I Dimension Hatross or Nothingface. But there’s a new twist duet with Rocky and Chewy on board. It’s almost fusion metal in a way, but we still keep the thrash metal attack in the mix. We tried to explore a lot in the studio but also the writing process was a bit long especially we toured a lot the last couple of years so we had to write parts of it on the road in the bus, we set up a studio in the back of the bus and try to build it. After a couple of years of work we were able to track it when we came back from Europe last fall. We ended the tracking early this Spring. It’s just that we wanted it to be like a long story musically and lyrically so it turned out to be quite a puzzle and we’re really proud of it.

There’s also a 12 minute song at the end, Sonic Mycelium. You’ve said that it’s reminiscent of some of the classic epic songs like Jack Luminous or others. Talk about that song and what it means on the album.

Away: Well, at first we we had in mind a file for the album about two-three minute instrumental and then Chewy had the idea of incorporating bits of every song but rearranged and then Snake had the idea of singing bits of every song but rearranged. So I was tracking drums and we were still writing the song, it was crazy and we ended up with a 12-13 minutes long song. Then Chewy had a string quartet idea and he wrote the parts for the quartet and gave it a real vibe. So yeah quite an experience that album.

How do you draw inspiration for new music and has that changed over the years? How did these songs come together?

Away: Snake wrote the lyrics. We threw a lot of ideas at him. From the start he wanted to write a long story and so we sort of had to follow the music as it came along and if anything it’s the same source, I mean for let’s say more than 20 years it’s been internet mainly, but before we used to read a lot of scientific magazines and stuff like that trying to find out what they were working on for the future. Nowadays it’s a lot of it comes from information and disinformation online. So it definitely has conspiracy theory about times but mainly it’s all about our worries about this planet. It’s always been like that for Voivod. I mean we’ve always been worried about high tech weaponry and the destruction of the Earth. But back then in the 80s we thought about Chernobyl and the Ozone layer and now we’re talking more about global warming, but it’s that recurring nightmare that we want to talk about.

Voivod has been mentioned more as as an influential progressive band, even winning the Prog Music Award for Visionary. What was winning that like? Did you always feel like the band was in that progressive rock label or is that something maybe newer that’s happened?

Away: We’ve been progressive rock fans from the very start because it was huge in the 70s so we naturally incorporated that enduring music of course we were more thrash punk at the beginning but there were still tons of material influenced by obscure progressive rock like Van Der Graaf or King Crimson. It was always in our blood. So we actually went at times a bit far into prog rock territory let’s say with Outer Limits for the new album The Wake him but it was a big surprise for me when we were told that he was winning the Visionary award for Prog magazine and had to go to London to receive it at the Shakespeare underground theatre, it was really amazing. But my highlight was to meet Peter Hamill from Van Der Graaf my favorite favorite band still. I also got to meet Steve Hackett, Carl Palmer, tons of heroes of mine. Yeah pretty cool stuff.

Looking back on the long career of the band, what’s the one song or album in your catalog that you think is the definitive Voivod sound, what you think the band stands for?

Away: I think the song “Killing Technology” is really what we had in mind. It’s really what we wanted to express back then. But it’s a reflection of the Cold War era. Nowadays, I would tend to go towards something like “Post Society” from the same EP.