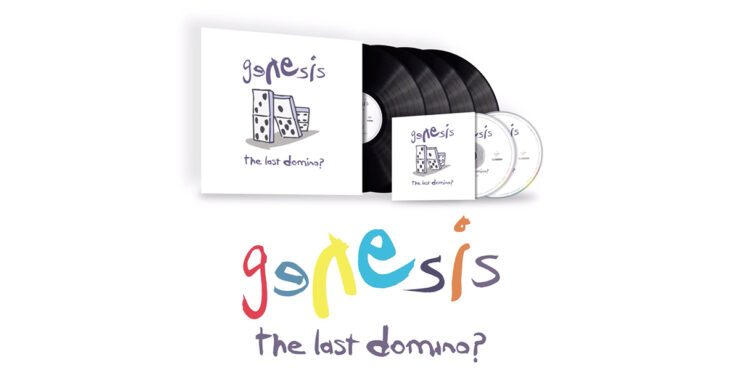 Genesis are thrilled to announce the release of ‘The Last Domino’, a collection of the band’s best-loved songs, including their biggest hits and legendary album cuts. Available as a double-CD and a 4LP set, the compilation will be released on September 17th, in conjunction with the start of The Last Domino? Tour, the band’s first in 14 years. Pre-order now from genesis.lnk.to/TheLastDomino

The 4LP set is housed in a hardback gatefold book-style package, which includes rare and unseen images of the band from their archive and images of the rehearsals of The Last Domino? Tour.

CD2
1.Duchess
2.No Son Of Mine
3.Firth Of Fifth
4.I Know What I Like
5.Domino Medley
6.Throwing It All Away
7.Tonight, Tonight, Tonight
8.Invisible Touch
9.I Can’t Dance
10.Dancing With The Moonlight Knight
11.Carpet Crawlers
12.Abacab

LP2
1.The Cinema Show
2.Afterglow
3.Hold On My Heart
4.Jesus He Knows Me
5.That’s All
6.The Lamb Lies Down On Broadway
7.In Too Deep
8.Follow You Follow Me

LP3
1.Duchess
2.No Son Of Mine
3.Firth Of Fifth
4.I Know What I Like
5.Domino Medley
6.Throwing It All Away

Genesis recently confirmed their highly anticipated return to North America for the first time in 14 years. The Last Domino? Tour 2021 will have Tony Banks, Phil Collins and Mike Rutherford playing major cities across the U.S. and Canada this November and December. The group will be joined by Nic Collins on drums, and the band’s long-time lead guitar and bass player Daryl Stuermer.