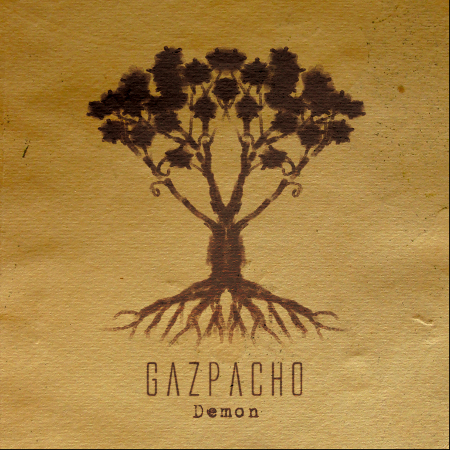 Gazpacho from Oslo, Norway have released their latest album simply called “Demon.” The band describe the concept of the album as ‘based on ‘the mad ramblings left behind by an unknown tenant in an apartment in Prague’.

Gazpacho from Oslo, Norway have released their latest album simply called “Demon.”  Not having been entirely too familiar with their catalog, I went into this review with no preconceived notion in what to expect.  To put it simply, you just don’t hear an album like this very often.  It is like watching an incredible art film and being engulfed in the characters and tone of the film.  This music gives you very much the same feeling.  Comprised of 4 songs, mostly longer songs with the exception of the second track, the songs on Demon are not predictable in any way, they possess no traditional format, yet are as captivating as anything.  Musically, the album lies somewhere between Steven Wilson’s “Raven” and Radiohead’s OK Computer, but slightly less commercial than both.  There is no shredding here, no poly-rhythmic playing or odd time-signatures, yet with each listen, there is heaviness in the songwriting and execution of the material that has a complexity all its own.

The band describe the concept of the album as “based on ‘the mad ramblings left behind by an unknown tenant in an apartment in Prague’.  The unknown author claimed to have discovered the source of what he called an evil presence in the world.  This presence, ‘The Demon,’ was an actual intelligent will, with no mercy and a desire for evil things to happen. The author wrote as if he had lived for thousands of years stalking this presence, and the manuscript included references to outdated branches of mathematics, pagan religions and an eyewitness account of the bubonic plague.”  That story is enough to get you interested in exploring the CD, but the music could not have matched the subject matter any better.

The album begins with “I’ve Been Walking, Pt. 1” with vocalist Jan-Henrik Ohme warily singing “I’ve Been Walking” over a simple haunting piano refrain.   And then the orchestral swell almost signifies the beginning of the movie.  The next section of verses lead begin to tell the story of the author over various musical passages, each one different form the previous.  About 6 minutes in there is a heavier section with the memorable line “I lost it down the rabbit hole.”  This is where Jan does his closest Thom Yorke impression.  By this point, as the song continues to build, the band start to introduce some more guitar and aggressiveness in their playing.  The song closes with a violin as if accompanying a man walking down a corridor.

The second track, “The Wizard of Alkai Mountain” is the shortest track clocking in at around 4 minutes.  It is good for the band to have a shorter track as a way of introducing the album, but this song only represents a very little bit of the overall sound and style.  Very folky with an accordion and toy piano, the song introduces the line “He is real if you believe in him.”  Yet, just as the song seems to get going, the band shift gears completely and all the music cuts out.  All that returns is an accordion which plays a middle eastern theme accompanied with a solo violin.  Again, this is nothing like you would expect but on this album it becomes the norm.

The third track “I’ve Been Walking Pt 2”, I found to be the highlight and easily the most memorable.  The song starts of slowly recalling some musical themes from pt 1.  Then comes perhaps the heaviest part led with a heart-pounding piano. The brilliant violin section in the middle is beautifully performed and has a David Gilmour guitar section as if from The Wall.  The ending of the song with the arpeggiated guitar part sounding like The Edge from U2, along with the yearning vocals, is the best part on the album and leads to an a incredible crescendo and abrupt ending.

The final song “Death Room” is the longest song at 18 minutes and takes a few listens to really absorb.  It starts very slowly and lingers on certain parts for a while before shifting to the next section.  But the song picks up towards the end and even starts to sound like early Genesis for brief moment.  The song ends with what are apparently the last words recorded within the unfinished manuscript just before the disappearance of the unknown writer.  Strangely but appropriate, the song and ultimately the album end abruptly with a series of distorted sounds and then silence.

After the first listen, I immediately had to listen again sure that I had missed a lot.  With each listen you discover more parts and music that can move you and make you think at the same time.   This is definitely one album to watch as one of the best for 2014.