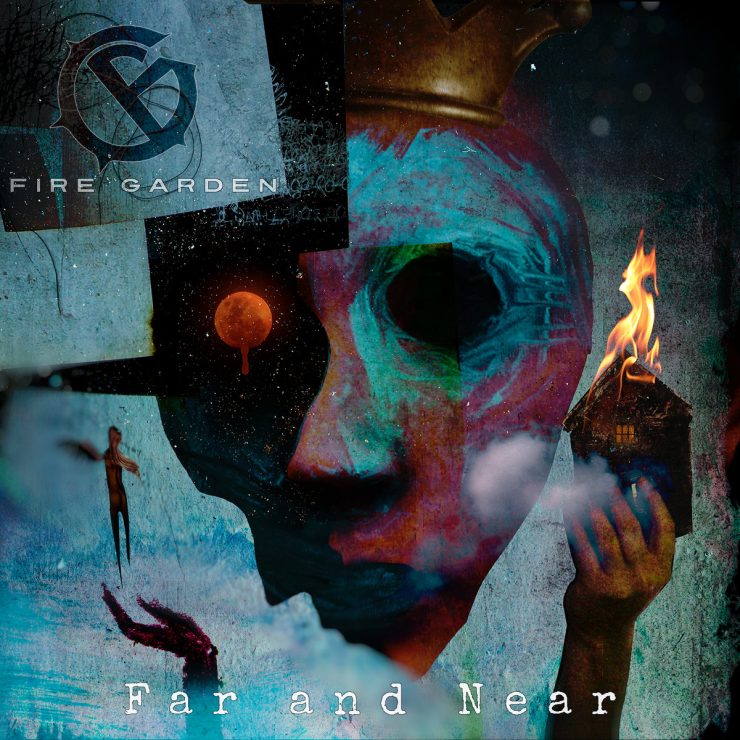 These days, the genre of Progressive Rock is increasingly a collaborative endeavor. There is regular cross-pollination between artists, often appearing on each-others’ projects in a spirit of support, assistance and collaboration for the health and survival of the genre. Fire Garden is one such project, and is the brainchild of Zeeshan Baig (aka Zee), a respected Chicago-based composer, multi-instrumentalist and vocalist. With one album and one EP under his belt, Zee has now released, through a Pledge campaign, Fire Garden’s third offering, “Far and Near”.

Before even listening, one can only be impressed with the luminary Prog names linked with this project, which include Jimmy Keegan (ex Spock’s Beard) on all drums, Dream Theater’s Jordan Rudess on a keyboard solo, Pineapple Thief’s Bruce Soord providing mixing services, and even the mighty Rich Mouser providing drum-recording contributions. Mark Malitz and Barry Kleiber fulfil bass guitar duties, and Frank Lucas delivers much of the keyboard input.

The album sports an exquisite cover booklet designed by Travis Smith and Zee himself (he is obviously very versatile), and importantly dedicates the work to “victims of war and terror”. This sets the tone for the album, and it is fair to say the music is in true keeping with the somber dedication.

The title track opens the album with an exquisite and melancholy piano vocal melody – but with no lyrics, and that somehow fits. The feel is exploratory, longing and searching, and leads into “There’s Something”, based on a simple yet effective guitar riff that will not be entirely unfamiliar to those who enjoy 70’s rock. Keegan makes his entrance, and the album is under way with a pleasing, solid track. The vocals, while adequate, are not overwhelming, and one wonders whether Zee should not have spread his net of contacts a little wider, to include a more versatile vocalist. The song nevertheless does satisfy, and shows that Zee is a composer who understands ebb and flow, and has a knack for providing just the right hook or bend when needed. The song goes from straight-ahead Prog into a part that exhibits Zee’s Prog credentials with a nicely-arranged 7/8 bridge. The slow middle section culminates in a massive Keegan drum fill that could almost be a mini drum solo, giving way to a weighty, slow guitar break and reconciliation back to the original riff. The stage is now well set, and the song bodes well for the rest of the project.

Next song “A New Day” is a slower, very solid exploration of Zee’s vintage proclivities, again bolstered by Keegan’s fat backbeats. The song has a couple of breaks in 6/8 timing, but is essentially a straight-ahead slow rock number. There’s nothing wrong with that, especially with Jimmy Keegan providing a granite foundation.

“Life of a Drifter” starts with a beautiful slow melody that hazes in and out just like the sad traveler it describes. It is melancholy and pensive, more suited to Zee’s vocals, and (perhaps intentionally) alerts the listener to Zee’s obvious admiration for Steven Wilson (a regular trend on the album). Then the track introduces the first truly menacing riff on the album. It portends something special, and suddenly, there he is – one Mr Rudess delivering one of the spectacular keyboard solos that have become his dominion. It could not have happened on a better song.

“A Thousand Lost Souls” is clearly engineered around the grim dedication on the album sleeve. Mournful and plaintive, it is again uncomplicated but well-constructed, and extracts the appropriate emotion from the listener. Zee certainly knows how to compose with emotional gravitas, and does so impressively on this song. Soord’s presence is also strongly felt on this simple but effective journey of sadness. It leads quite logically into the next song, “War and Peace”, which allows Zee to begin to express his anger with more of a snarl. Again, the Steven Wilson influence is very strong, and the composer’s frustration and anger at the state of the world is clear.

More anger, nay, fury, is to be felt on next track “Faint Shadows”. The heavy, guitar-oriented Prog metal that is to be expected from Fire Garden is here in abundance, and the riffs are appropriately tortured and bleak, but melody and structure still remain integral to the song. Guitar/bass/drum riffing in impossible but unified timing is the order of the day. The arrangement is complicated, varied and excellent, and attempts, with reasonable success, to approach the complex territory over which Fates Warning are so dominant.

“Whitelight” returns us to gentle, sad and forlorn melody. Somewhat incongruously, Zee’s voice suits this one perfectly, and the result is beautiful. If Zee is going to write music that is designed for his own voice, he should be doing more songs like this. Gentle, longing and searching, the song ignites emotional switches in the listener, especially when the inevitable heavy Prog middle section eviscerates the melancholy. Thereafter, we are returned to another searching, slow melody based on a menacing keyboard riff that builds with an underlying drone, ending in the middle of space. Stunning – “Whitelight”, together with the closing track, is the highlight song of the album.

Dream Theater comparisons will inevitably be drawn by most listeners at the start of final track “Diary of The Blood Moon”. That distraction notwithstanding, the track is extremely well-composed and performed (and is, of course, very complex.) Jimmy Keegan is rampant and provides due impetus to the weighty theme of the song. The diminutive tub-thumper packs a heavy punch, and he is nothing if not one of the world’s most versatile and creative drummers. Every fill, indeed every stroke, is carefully considered and prepared with infinite precision, and it is pleasing to report that the band keeps up with him admirably. The middle section of “Diary” is an interesting departure in that it sounds nothing like Dream Theater (perhaps more like a mix between Fates Warning and Steven Wilson, again), But the song is excellent Prog metal with pertinent lyrical content. The instrumentation, built around Zee’s full guitars and Keegan’s always immaculate drumming, is stellar and will please any fan of the genre. I loved the acoustic and electric guitar solos towards the end.

All in all this is an excellent album. Expect vintage 70’s sounds, with a distinctly modern twist. Expect to hear Zee’s own influences (particularly Steven Wilson) coming through very strongly, and expect an overall fine effort from this Chicago talent, on his third record. He no doubt has much more to offer in terms of originality, and I am certain that this will come. His recruitment of collaborators like Keegan and Rudess is impressive, and I believe he should continue this trend, perhaps also looking to a guest vocalist for some songs. Soord’s production technique may sound a little ‘vintage’ to some, on certain songs (he is with Pineapple Thief after all), but the production values generally enhance the album’s worth.

“Far and Near” is worth investing in, and indeed, the success of the Pledge campaign that gave rise to it, is proof of that. The album is not a classic, since it is clearly (and one believes intentionally) derivative of Zee’s influences, but this does not matter. The presence of Keegan and Rudess is indicative of Fire Garden’s high standard, and of Zee’s rising prominence. “Near and Far” is a solid and recommendable release from this fine composer, and augurs well for his future collaborations.