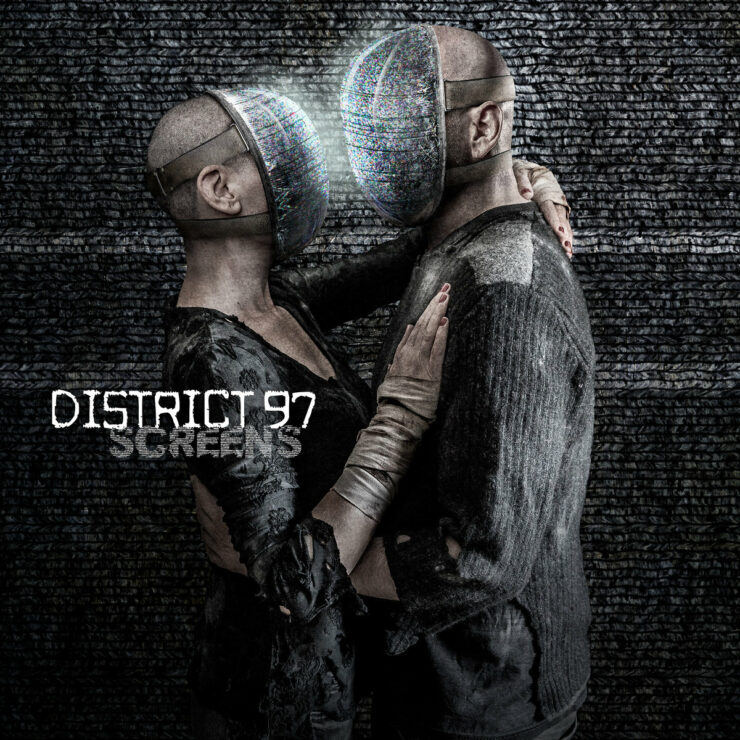 Although their initial tongue-in-cheek claim to fame—that they’re “the most musically adventurous rock band in the world to feature an American Idol Top 10 Female Finalist”—may seem gimmicky, Chicago quintet District 97 is far more than that. Having earned praise from genre heavyweights like Bill Bruford, Mike Portnoy, and the late John Wetton in the past, the progressive rock/metal troupe—said singer, Leslie Hunt, as well as guitarist/keyboardist Andrew Lawrence, bassist Tim Seisser, percussionist Jonathan Schang, and guitarist/backing vocalist Jim Tashjian—never fails to satisfy with their accessible hooks and advanced musicianship. Unsurprisingly, that’s still the case with their fourth formal outing, Screens, a relentlessly engaging, dynamic, and characteristic audio treat that fans of the group (and genre) will no doubt adore.

Screens follows 2015’s In Vaults and marks the studio debuts of Lawrence and Seisser (who replace Rob Clearfield and Patrick Mulcahy, respectively). As for how the LP compares to its predecessors and represents the new line-up, the group explains: “[It] retains the essential elements of the District 97 sound, while also incorporating fresh, exciting influences. The synergy of the new lineup is well beyond what we could have expected.” Indeed, the album is as renewed and frisky as anything else they’ve done, permeating a silkily smooth steadiness of quasi mainstream hooks, zig-zag complexity, and unfalteringly fluid modifications to craft yet another vital entry in both their catalog and the realm of modern progressive music at large.

For sure, there’s plenty of archetypical progressive metal trickery afoot on several songs. Specifically, opener “Forest Fire” exudes District 97 emblems like irregular syncopation, oddly time guitar riffs, bizarre timbres, and seamlessly twisty melodic shifts that never cease being mesmerizing (especially the chorus). In fact, it’s likely one of the groups most gripping tracks ever—which is saying something—with clear nods to King Crimson and Rush. Follow-up “Sheep” is a bit breezier and classier, yet the occasional interlocking zaniness between piano, drums, and bass is top-notch; likewise, the balance of brutality and blissfulness within the pop/rock/jazz fusion regality of “Bread and Yarn” (which features Hunt and Tashjian sharing vocal duties) is remarkable. The more futuristic “Shapeshifter” finds Lawrence’s keyboard knack on full display amidst the chaos, whereas “Blueprint” capably alternates between tasteful lamentations and raucous outrage.

Still, there are some relatively simpler and more commercially viable pieces in there, too, and that’s not meant in any pejorative way. Rather, the tempered and infectious adrenaline rush of “Sea I Provide,” the anthemic sing-along density of “Trigger,” and the lengthy soft/heavy alternations and narration of fairy tale closer “Ghost Girl” demonstrate how inviting and absorbing District 97 can be without sacrificing any idiosyncratic zeal. By no means inferior to their more sophisticated siblings, these are some of the most fetching segments on Screens.

Undoubtedly, Screens is one of the group’s most focused, consistent, and memorable sequences yet in terms of both eye-catching songwriting and enrapturing structures. The mainstays shine as brightly as ever, and newcomers Lawrence and Seisser definitely bring their own flavors to the fold while also feeling right at home within the District 97 formula. It’s truly a complete demonstration of everything that makes the quintet so special, and no matter where they go from here, this fourth LP will surely always rank near the top of their discography.