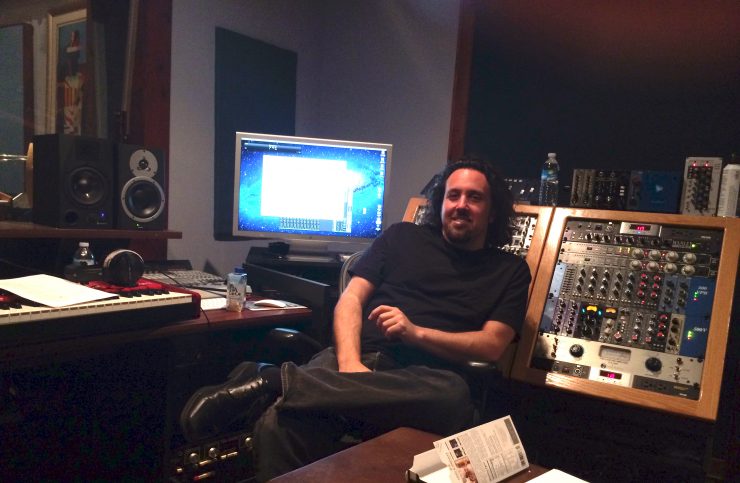 This article was written by R. Avin of The Prog Report  for PROG mag.

One of last year’s biggest surprises was the successful debut album of Sound of Contact.  Fronted by Simon Collins, the band also featured producer/songwriter Dave Kerzner, known for recording with such music icons as Steve Hackett, Steven Wilson and Kevin Gilbert just to name a few.  Having been content to be behind the scenes and running his sound development company, Sonic Reality, Dave, who has since parted ways with Sound of Contact, is gearing up for the first time to take center stage as a solo artist.  Holed up in his own Miami studio that is littered with enough vintage keyboards and recording equipment to open a museum, Dave is currently putting the finishing touches on what might be setting up to be one of this year’s best Prog records.  The new album, titled New World, is scheduled to be out this Fall and features a spectacular guest list including Steve Hackett, Nick D’Virgillio, Francis Dunnery, David Longdon, Durga McBroom and more.

“This is the first album where I’m the front person singing and writing everything. For years I preferred to be more of a behind the scenes keyboard guy, producer and songwriter. I’ve finally decided to make the transition to frontman because it affords me the possibility to see a vision through and not have anything that would impede the creative process. I also love being part of a great band, but the flip side, with this approach is that I can find just the right people per song that fit. It’s always about the song and within that some songs have a really good cue for a killer guitar solo with a particular style or a chance to go off on the drums and I like collaborating with different people to realize a vision.”

The album’s opening track is a 10 plus minute Prog opus with Nick D’Virgillio on drums and it features a rousing guitar solo by Steve Hackett.  Channeling the legends of 70’s Prog, Pink Floyd and Genesis, there are also some similarities to the sound of his previous band Sound of Contact, since Dave was one of the main songwriters of the album “Dimensionaut”.  Fans of Progressive rock will be pleased.

Kerzner says he plans to launch a Kickstarter campaign to fund the release of the album and there will be exclusive bonus extra songs. The first single is the 10+ minute “rock opera” and is expected to be out this Summer with the full album due to be released in September.

Calling on a number of guest musicians was not without its challenges.  “It’s kind of like casting for a movie. For instance the song that Steve Hackett played on has a section that’s sort of influenced by old Hackett and Genesis albums to begin with so it has sort of a Voyage of the Acolyte/Supper’s Ready type middle instrumental section that just begs for a Hackett solo.  Then, there’s a bookend at the end of the album where it goes into this grandiose outro that ties the whole thing together and Hackett’s style blends with mine in a way that really worked out beautifully!”

“It’s a solo album but it’s less about me.  Lyrically and vocally it is, and in that sense it’s very personal but I kind of spread it around when it comes to the Prog chops. It feels better to have myself in context of other people that I really respect musically and know what they do and instead of a keyboard solo in every song I have them doing what they do best in my songs too. Sometimes they are the featured instrument. What matters to me is that everyone has an artistic connection and that we’re all serving the song.”