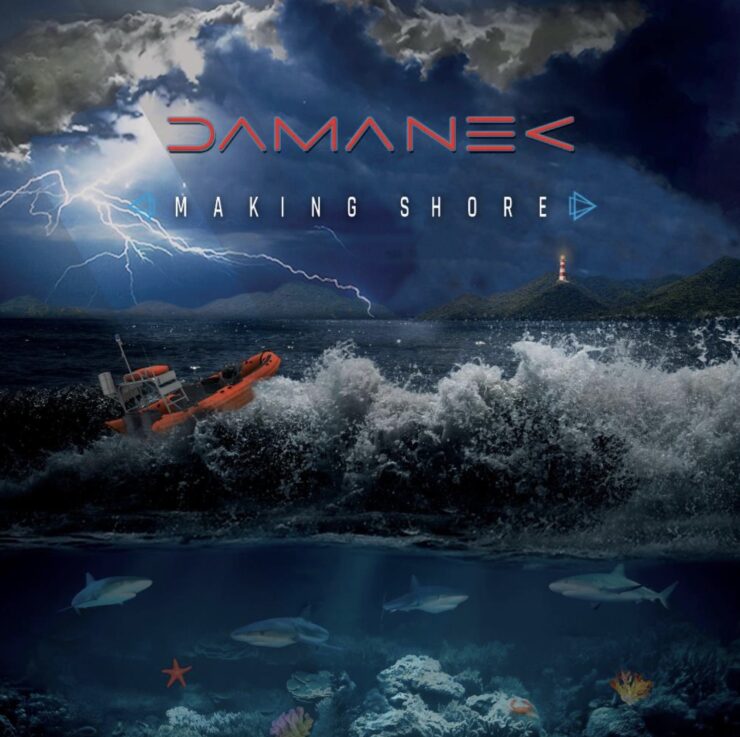 There are often discussions on this site and prog circles involving Prog acts releasing more straightforward material, and rock bands releasing Prog-adjacent material, or sometimes there is a middle ground, which is where Damanek might exist.  Released on January 13th, 2023, ‘Making Shore’ further establishes Damanek as a Progressive force, but does so in a slightly more forthright fashion than its two more technical predecessors, ‘On Track’ and ‘In Flight’. Expect, for the most part, 4/4 time-signatures and direct melodies emphasizing songwriting and production over excessive technicality.

Multi-instrumentalist, singer and composer Guy Manning, together with keyboardist Sean Timms and saxophonist/keyboardist Marek Arnold, have been the core of the band since its inception in 2017. With Damanek’s third studio album ‘Making Shore’, the band’s tradition of engaging a long and respected list of guest artists has been continued. This list includes Nick Sinclair and Jonathan Barrett on basses, Southern Empire’s Brody Thomas Green and Cam Blokland on drums and guitar respectively, trumpeter Riley Nixon-Burns, flautist Linda Pirie and backing vocalists Julie King, Kevin Currie and Amanda Timms.

Manning’s vocal timbre takes some getting used to. It is (for me) often reminiscent of Ian Anderson in his halcyon days. There is also a Tangent-style low-end lilt to his voice that sometimes detracts from the comfortable spaces created by the music. But once the distinctiveness of his vocal style sinks in, the music takes over.

The album is divided into Part One, which comprises stand-alone songs that are about ‘Socio/economic/political themes’ and Part Two, the thirty-minute epic ‘Oculus’, ‘an epic gothic and literary flight of fancy’ exploring time travel and a parallel universe in five parts. From these descriptions (taken from the band’s website), one might expect deeply metaphysical lyrics, possibly as obscure as those of, say, Jon Anderson. But this is not so. Whilst variously allegorical, the lyrics consistently strike me as being somewhat literal. They paint fairly obvious pictures in Manning’s distinctive voice, placed high in the mix, rather than providing soundscapes that would allow the listener’s imagination to take over. Now that this minor observation has been made, I must also say that the lyrical foibles are, in most songs, more than made up for by excellent musical compositions and near-flawless production.

Most songs are a rich tapestry of melodies and sonic variation. The listener is taken on a journey from Mount Everest to the American Heartland, from The Great Barrier Reef to the Mediterranean Sea and from the Earth’s atmosphere into the cosmos. Broader themes include the conquering of the Himalayas (‘A Mountain of Sky’), climate change (‘Back2Back’), child starvation (‘Noon Day Candles’), US agricultural challenges (‘Americana’), ocean damage (‘Crown of Thorns’), mental health (‘Reflections on Copper’) and alternate reality (‘Oculus’.) There is also a very personal theme in ‘In Deep Blue’, which is apparently about Manning’s son overcoming hardships to achieve the personal milestone of deep-sea diving. This song and ‘Noon Day Candles’ sound a little dirge-like in places, and the lyrics do not have much allegory or symbolism (‘Angel fish swim along anemone row’ and ‘If we can put a man on the Moon, why can’t we put food on the table?’)

My favorite moment on the album is without a doubt ‘Back2Back’ which is a glorious and hugely fulfilling example of what can be done when the funkiest of funk techniques are used to deliver top-drawer Prog. (‘Americana’ is another example of this.) Excellent drummer Brody Thomas Green drives these songs with massive intent and brilliant chops and the brass players’ and backing vocalists’ performances could have been in Tower of Power. There is almost a Stevie Wonder ‘Superstition’ groove in ‘Back2Back’ before the brass comes in. Fabulous – I really hope to see this performed live.

The epic ‘Oculus’ (all five parts) also deserves specific mention. At thirty minutes, it is adventurous indeed, and it settles the ‘Prog/Not Prog debate in a very affirmative manner. Although the honey-glazed keyboard strains of ‘Act III Passive Ghost’ are pleasing, the highlight of the suite is ‘Act IV ’A Welcoming Hand.’ This track is most definitely ‘not Not Prog’, and the Tull/Tillison-like vocals and complex instrumentals are filled with redemption and solace. From generous bass-lines to urgent horns, soaring harmonies to writhing keyboards, dazzling guitar solos to white-hot drumming, the epic closing suite has it all, and is worthy of your attention – all the way up to the huge slamming door that ends the album.

The production is consistently excellent throughout, though it must be said that the vulnerability of Manning’s unusual vocal traits may in part have been caused by his vocals being placed too high in the mix. This and the sometime triteness of the lyrics notwithstanding, ‘Making Shore’ is an excellent album of variation and stylistic combination that ultimately proves to be – well – Progressive. Majestic and melodic, powerful and polished, the performances, while not always subtle, comprise clear declarations of the highest musical prowess. There is a lightness to the weightiness on this album.

Prog, Not Prog? Prog-heavy, Prog-lite? Truly, not many people care about these categorizations, provided they receive musical fulfillment, which is most certainly to be found on most of the tracks on ‘Making Shore’. Recommended.