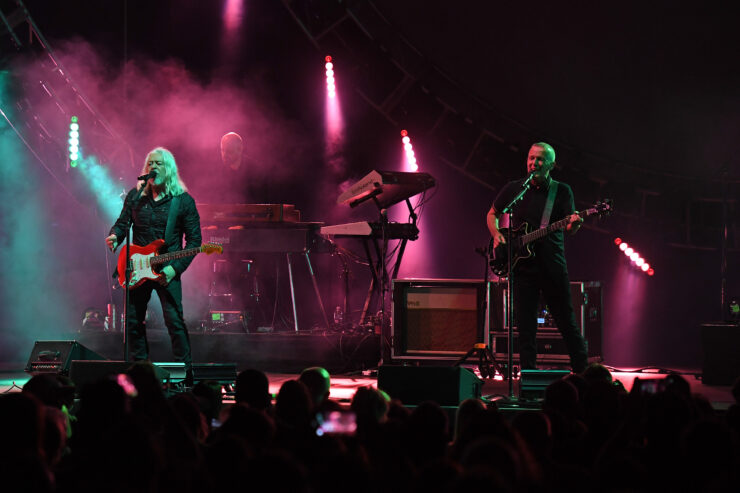 Review of the Tears For Fears concert with Garbage in West Palm Beach for The Tipping Point tour on June 9th, 2022.

Everything was set for brilliant night in West Palm Beach, FL. The clouds had lifted after the day’s deluge, and the audience filled out the seats and back lawn as far as the eye could see. With shows finally starting to return, it’s no wonder anticipation was in the air for a great show from 80s pop icons Tears For Fears and 90s alternative rockers Garbage. And what an amazing night it was.

Garbage took the stage first and delivered a powerful 60 minute set full of the songs that made them 90s MTV and alt-radio darlings including “Stupid Girl”, “I’m Only Happy When It Rains”, and “Push It”. Shirley Manson commanded the crowd with her dynamic vocals and stage presence as she always has. They closed with the haunting “You Look So Fine”, which included Manson singing the Fleetwood Mac classic “Dreams” over the music as the song concluded. It was as good an opening set as you can hope for and seemed to hit with the crowd.

Tears For Fears took the stage promptly at 9pm. The lights faded as the sounds of the closing track “Stay” from their latest album ‘The Tipping Point’ played over the speakers. As that song ended, Roland Orzabal, Curt Smith and the band took to the stage and delivered the first two songs from The Tipping Point, “No Small Thing” and the title track. Both were powerful and emphatically made the declaration that they are not just a nostalgia act. However, with the opening notes of the 3rd song, the band’s classic smash hit “Everybody Wants to Rule The World”, the audience jumped to their feet and things seemed to really kick into gear. They followed with the track “Secret World” and the epic “Sowing the Seeds of Love” next before jumping into 4 songs in a row from their critically-acclaimed new album. The standout of those tracks was the poignant “Rivers of Mercy” which sounded glorious.

From there the duo took the audience back to where it all started with a couple of tracks from The Hurting, “Mad World” and re-arranged softer version of “Suffer the Children”, sung brilliantly by new backup singer Lauren Evans, making her debut with the band that night. The singer seemed to lift the show to another level as she sang Oleta Adams’ parts on “Woman In Chains” and “Badman’s Song”. Evans is an other-worldly talent who no doubt we should be hearing about again. The hits kept coming with “Pale Shelter”, “Break it Down Again” and the mega-hit “Head Over Heels” closing out the main set. The “na-na-na’s” from the crowd were louder than even the band.

For the encore, the band played one more new track “End of Night” before actually ending the night with the one-two punch of “Change” and “Shout”.  Both sounded brilliant, as did the exceptional band. The stage set and lighting was another element that made the night special with the Pink Floyd-esque screen display fitting perfectly and elevating the delivery of each song.

The vibe at the iThink Financial Amphitheatre in West Palm Beach was one of mutual appreciation. After this extended period  we’ve all gone through without shows, the massive audience in attendance was even more engaged and attentive, appreciative of what they were experiencing. Equally, Roland and Curt seemed to take pause between tracks as if in awe of what the adulation they were receiving, truly soaking it all in. It is great to have these guys back where they belong, releasing amazing new music, and filling big venues. Hopefully, this is just the start of a new beginning.