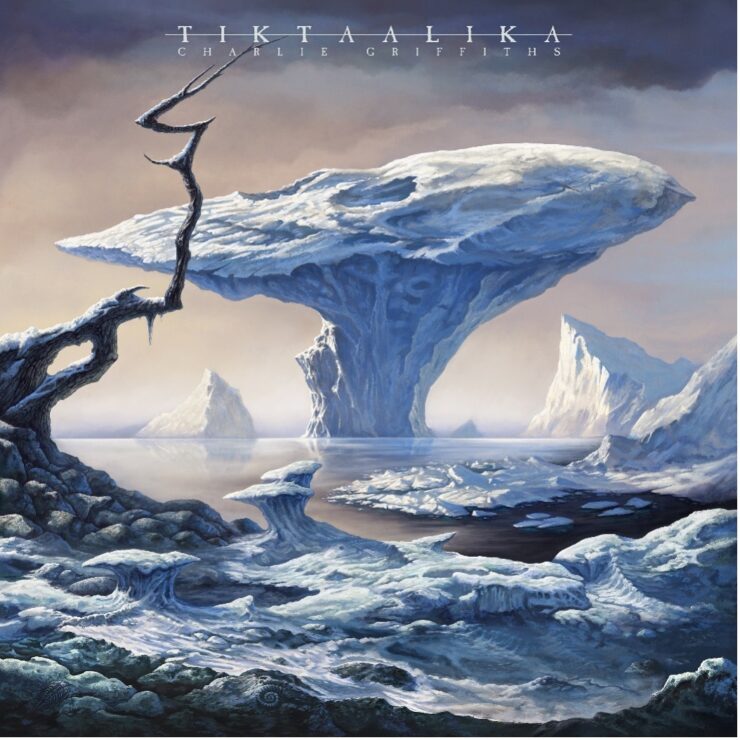 Review of the debut album from Charlie Griffiths – Tiktaalika

The critical mind would come to the conclusion that metal music has run out of new musical and melodic ideas trying to sound different. Part of this thought process would be the evolution of the electric guitar not only in alternative tunings, but in adding more strings which expand the sound palette of metal’s main instrument. These extended range instruments have taken metal to a modern place which has captured the hearts and attention of a new generation of musicians to carry the torch of metal into the future.

Enter Charlie Griffiths, a guitarist for modern progressive metal veterans Haken. He has spent his time creating and performing music in the 7-8 string guitar realm for over 10 years; however, he explains picking up the 6 string guitar sent him into a different creative track where riffs came naturally. These formed into the songs of his debut solo album Tiktaalika. Charlie’s reconnection with the six string has also brought out his early musical heroes influences which result in a very diversified debut solo album with several terrific melodic ideas. Although Griffiths is the third Haken member to release a solo project over the last three years, he is not third in line when it comes to delivering an excellent album. It becomes clear with the excellent work of Henshall, Jennings, and Griffiths, why Haken’s variety is part of their weaponry in making great songs and albums.

You can hear The Prog Report’s interview with Charlie as he explains the inspiration and ideas for the concept of his solo album here.

The opening track “Prehistoric Prelude” is molded after many metal mega classics where the acoustic guitar intro leads you to a full-on speed metal/thrash blast off. Immediately, Charlie’s metal rhythm and lead chops are unleashed along with Darby Todd’s (Martin Barre, Frost, Devin Townsend) precise and powerful drums. To no surprise, the excellent audio mix is provided by Nolly Getgood. Immediately, you are inspired to know this is something new and exciting.

The most significant aspect of the album is the variety of styles it presents. This is facilitated by the performances of the guest musicians. “Arctic Cemetery” features Tommy Rogers (BTBAM) bringing his dichotomy of vocal melody and brutal growls. This song is also the first release with video. It transitions immediately to “Luminous Beings” with the vocals of Danïel De Jongh (ex-Textures). This has a great groove where Todd’s jazzier drumming style is evident. This song is entertaining you with more fusion styled solos and chords. The more subtle guitar work brings forth the bass and keyboards which Griffiths has also taken on this solo project.

The next two tracks, which clock in at almost 17 minutes, feature the vocal performance of Vladimir Lalić (Organized Chaos) and Neil Purdy (Luna’s Call). The songs, however, are stylistically different. “In Alluvium” has a big sound and slower groove, highlighted by the soloing wizardry of Jordan Rudess (Dream Theater) where Griffiths explains the performance on the recording was the first take. The ending of the song has a beautiful and haunting chorus which transitions directly into the opening bass riff of “Dead In The Water”. This is anchored around a heavier riff and faster tempo. What separates this number is the saxophone work of Rob Townsend (Steve Hackett). The middle breakdown interplay between the sax and guitar is terrific. This song is a microcosm of the versatility of this album. It is vastly dymanic, technical, melodic, and powerful. The acoustic ending brings this two song epic to a perfect close.

On to the next two songs, which focus all the attention on Griffiths’s musical talent. “Digging Deeper” is a moody and mellow performance where Charlie takes on the vocal duties which are perfectly complemented by the guitar. This is followed by the title track “Tiktaalika,” which is the second release with video. The full length instrumental track of the album brings what is the best of Charlie Griffiths guitar work. It has some terrific metal guitar sauce on display. The fast and heavy style continues on “Crawl Walk Run”. This song brings De Jongh’s second contribution to the album in a much more aggressive style. Charlie performs another great solo which has portions showing his Satriani and Vai influences.

In typical prog fashion, “Under Polaris” closes the album with a reprise of an earlier melody.This shorter song starts with another advanced-skills progressive metal breakdown between drums, guitars, and keyboards. Then the return of Tommy Rogers singing a familiar melody from the aforementioned “Arctic Cemetery” leads into the final epic reprise of the first melody. Closing the circle is the acoustic guitar which has landed the listener right back where you started the journey. In many ways, this prepares you to want to listen to it again, and again.

An additional element that contributes to the album is the concept revolving around the prehistoric reptile known as Tiktaalik. As Griffiths describes the album. “This concept album was 375 million years in the making, with the 9 tracks drawing inspiration from themes of geological time, fossilization, transformation and humanity’s connections with each other and the planet we inhabit.” Accompanying a few of the album’s singles are brilliantly animated videos that recall Saturday morning cartoons.

To summarize, this album is rooted in Charlie’s love and influences from 80’s thrash and guitar heroes which results in a metal work of art taking you through a musical journey, with variations of styles and moods to keep things fresh and entertaining. Tiktaalika is a complete work of art, from the killer songs and guest appearances, right down to the outstanding album cover. At almost the half-way mark of 2022, we can surely expect this album to be among the top album lists at the end of the year.