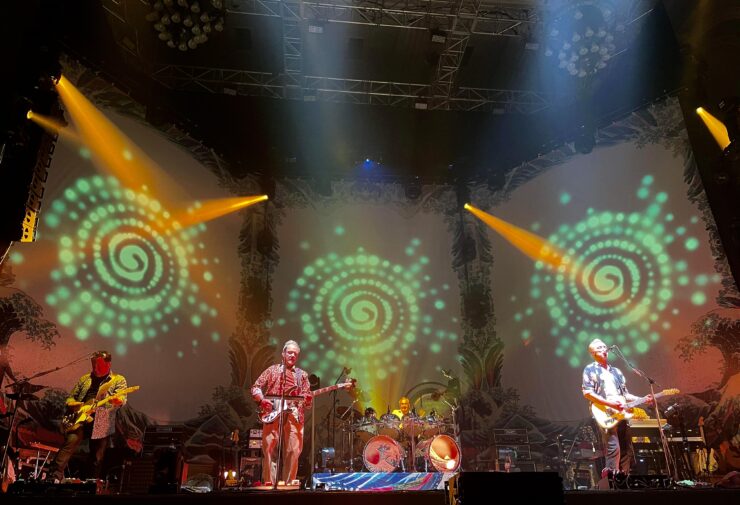 So I completed the set… I’ve seen Roger live twice, David with Rick on keys… so Nick on drums was the missing piece!!! Yes the Saucerful of Secrets band are back on the road, touring for the first time since 2019. If you’ve been living under a rock, I’ll explain that the band came from Mason being approached by guitarist Lee Harris suggesting forming a band that performed the band’s pre-Dark Side of the Moon material. Adding Guy Pratt (Floyd bassist in situ since 1987), Gary Kemp on guitar and vocals plus Wright collaborator Dom Beken, the band got underway and are finally back on the road. The Belfast show was show #2 on a U.K. tour and even before it started we were lured into the world of Floyd. With 3 massive backdrops, a recording of abstract and Floyd related found sounds playing, and a drum kick with double kick drums featuring the iconic Hokusai wave design, we awaited the music. It wasn’t long before the echoing bass guitar of One Of These Days was audible before the band hit the stage a few seconds later – and what a sound! The great thing about SoS is how they embody the spirit of the music without being slavish in copying it. Yes all the main elements are there, but given that improvisation was a big part of the live Floyd experience in those years, that spirit is retained within his SoS present the music. To think of this as the Syd era isn’t actually the case because as much focus is given to album like Meddle, Atom Heart Mother and Obscured by Clouds as it is to the first two. Arnold Layne is up early in the set and is a joy to hear live! A few songs later, a version of its B-side Candy and A Currant Bun appears – talk about deep cuts, made even deeper by reverting to the original “Lets Roll Another One” lyric in the later verses, this is truly one for the fanboys/girls – but what a great song. 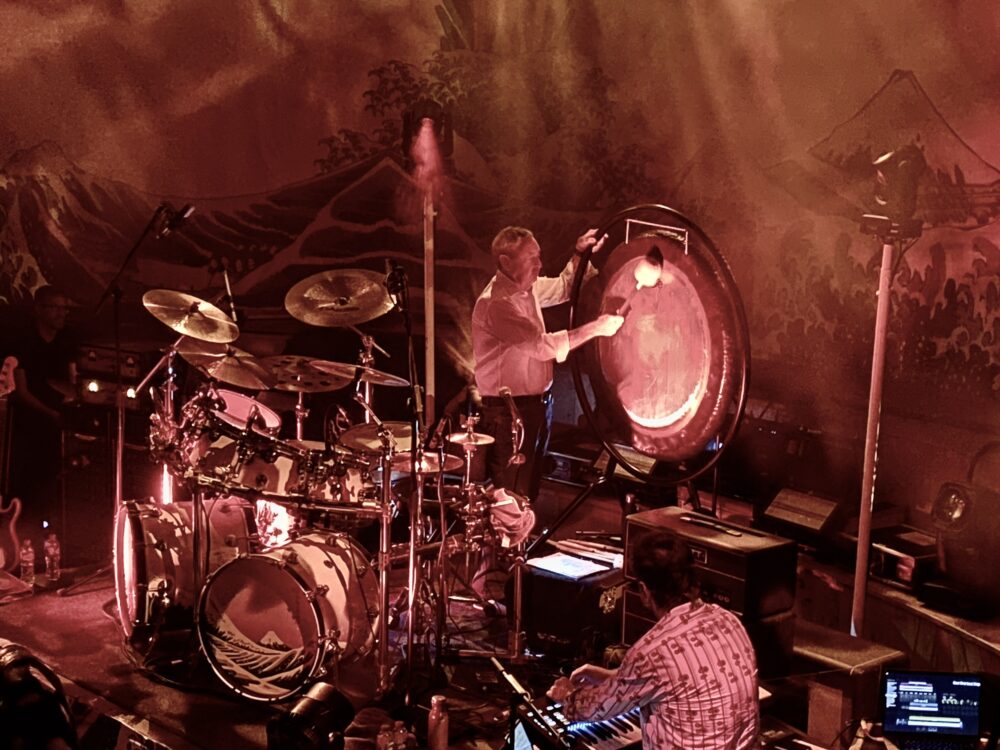 Vocals are shared between the two Rockanteurs, Gary and Guy, and their vocals are a great fit for the English psychedelic whimsy of Lucifer Sam or Remember A Day, as they are for some of later era harmony based songs. It’s quite amusing to hear the band rip into Vegetable Man, a song that Floyd didn’t even release in their lifetime, before moving to something more familiar like If from Atom Heart Mother – an AHM suite was included as well which was a light speed tour through that epic piece’s best moment (and actually this version was long enough – even an improvement!!!).

All of the Floyd band members were mentioned by name, Guy Pratt singing Rick Wright’s Remember A Day being dedicated to Pratt’s son, who is also Wright’s grandson. Even Roger got a mention, albeit bundled with Kemp’s former Spandau Ballet colleague Tony Hadley… Burning Bridges from Obscured By Clouds was also played – perhaps a good summary of those particular relationships! As a big fan of Pink Floyd Live At Pompeii it was great to see Mason’s gong getting thrashed by Guy and him as part of that performance and even the instrumental Saucerful… was played with great skill – a thrilling piece in a slightly new arrangement for this line up. 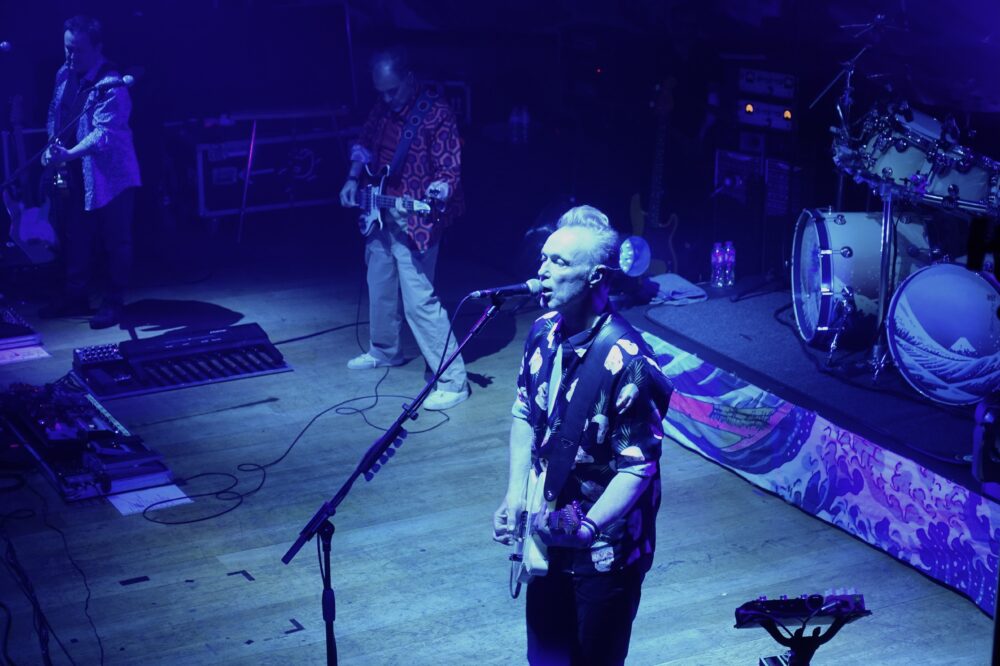 As an unashamed fan of Obscured by Clouds, I love Gary Kemp’s aggressive take on Childhood’s End and the pairing of the opening 2 instrumental tracks from that album – these particularly showcased Dom, who on top of playing keyboards was controlling a lot of the additional noise / sound effects throughout the show. As I mentioned, improvisation was very much part of the show and the band members dived into those sections with great skill and a spirit of adventure, moving from ear splitting noise, to near silence effortlessly.

Of course The Echoes Tour was always going to feature that song, one fairly synonymous with Gilmour’s guitar and vocal harmonies with Wright. Is this one a bit too sacrosanct? Well my verdict is – not at all! The audience roar that went up after the first piano “ping” let the band know we were right with them as lovers of this song. It’s worth highlighting how Lee Harris and Gary Kemp covered a huge array of guitar sounds and styles during the show. What Gilmour plays is rarely technically challenging, but that doesn’t mean it’s easy to play “right”. But the two musicians do an amazing job at “right”, as comfortable on a masterpiece like Echoes or a freak out like Interstellar Overdrive or 60s pop like See Emily Play.

In conclusion I will say – if this band come anywhere near you, go and see them! You will see a legendary drummer who is still completely in the zone at 78 years old, with a group of musicians playing dazzling music and clearly having the time of their lives on stage! 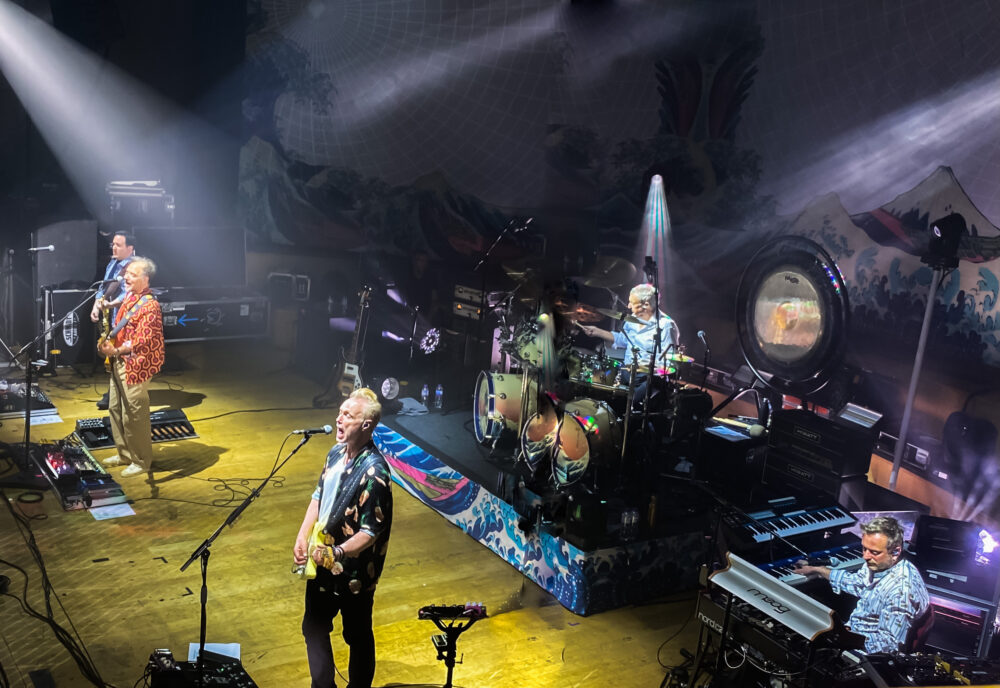 Set 1:
One of These Days
Arnold Layne
Fearless
Obscured by Clouds
When You’re In
Candy and a Currant Bun
Vegetable Man
Lucifer Sam
If
Atom Heart Mother
(partial, with “If” reprise)
Remember a Day
Set the Controls for the Heart of the Sun

Encore:
A Saucerful of Secrets
Bike