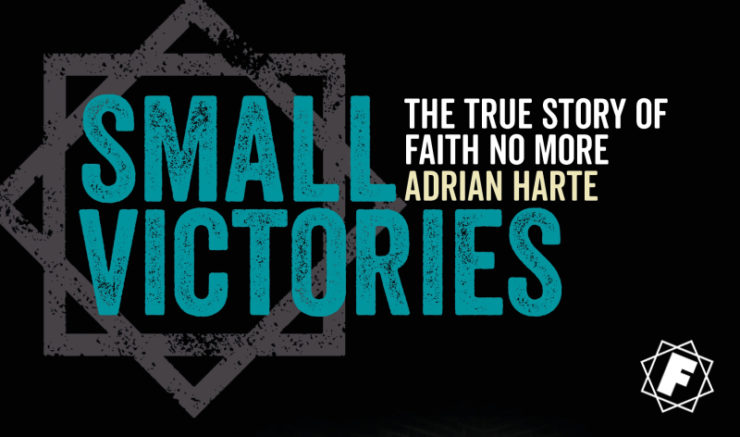 Faith No More are a band that have always been difficult to label.  What exactly are they?  Are they Metal, Alternative, Progressive, Indie, or all of the above?  While the band isn’t likely to be put in the same category as Yes or Dream Theater in terms of their prog tendencies or extravagant musicianship, what they always brought was the ability to take risks musically.  They never made the same album twice and always tried new things and experimented with arrangements and instruments.  This methodology is exactly what has always drawn the prog fan to like Faith No More.  With this new biography “Small Victories: The True Story of Faith No More,” we get the first real in-depth look at what made this band the iconic group they were.

Writer Adrian Harte dives into the band’s history head on and with great detail, pulling from direct interviews from original members of Faith. No Man, before the band eventually evolved.  The band hit the big time in the late 80’s, reluctantly pushed into the hair metal scene, even though they couldn’t have been anything further.  But who knew that Courtney Love of Hole was once the group’s lead singer?  We also find out why she got kicked out. Also, interesting is finding out that Guns N Roses and Def Leppard were summoned by the record label to appear at the band’s release party to help draw attention to the group.  There are a number of discoveries in the book that are surprising, while the discovery of Mike Patton, from young, and shy, rock outsider to enigmatic frontman is a fascinating story in itself.

For any fan of Faith No More, this is a great read with a lot of detail.  The chapters are short but packed with a lot of well researched history.  This is the story of a band that stuck together through a lot of  false starts and missteps, but never lost their integrity to do what they wanted.  This a must have book for anyone that has loved this band.

Buy the book here on Amazon.