A review of some recently released books on prog.

The Holiday day season is often a period when I get some down-time to put our feet up and read a good book in front of the fire. For anyone who fancies doing similar, there are some great choices out there this year… 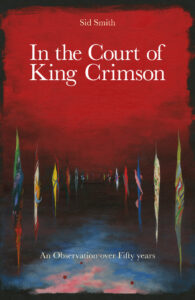 The 50th Anniversary of Robert Fripp’s merry band was of course the perfect opportunity for an update of Sid’s much loved 2001 book- though to call this an update is something of an understatement! Back at the start of the millennium, it would have been hard to conceive that Crimson would an alive and vibrant band, playing shows every year around the world whose set lists (and band members) are drawn from the full breadth of their catalogue. Therefore the time was right to revisit and draw upon the many insights from virtually everyone who has been in the band, as well as many closely associated, telling the story from the variety of perspectives of the individuals. One of the things that is great about this book is that it tells the whole story, including every side of the conflicts and twists and turns in the band’s journey with no detail spared. Add to that a song by song commentary on every track, lots of details of live shows, including an appendix of Smith’s reviews of the highlight of the DGM Live Archive, and some great photos from throughout the year, and you simply have Encyclopedia Crimtanica!

Dialogue – The Yes Interviews – Volumes 1 and 2 – by Jon Kirkman 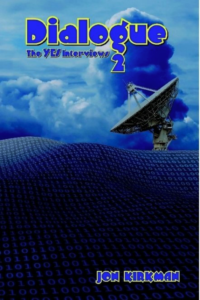 The figurehead of the Cruise to the Edge, Kirkman has an incredible archive of in depth interview material with virtually every Yesman that existed from throughout their career. Several years ago a huge coffee-table, all colour book called Dialogue compiled the cream of these interviews, along with lots of photographs into a Yesfan’s treasure trove. As an owner of that volume, its sheer luxury undermined its portability – it didnt exactly fit in your back pocket to read on the train!

That is why I am delighted that Jon has released the first of 4 volumes of not only the interviews that were in that book, but also further deep cuts from his collection. Boasting 16 and 20 interviews respectively these volumes cover Peter Banks talking about the early days, through to Trevor Horn explaining the new version of Fly From Here, along with Oliver Wakeman giving an insight into the material we were delighted to hear this year on the surprise On A Page album… oh, and everything in between. With two more volumes promised in 2020, and, I’m sure, many more projects on the horizon, it’s time for Yesfans to start building their collection.

Prog fans love the details of the music and the bands they love, and Jon’s books contain lots of detail and nuance that make the story and the music come to life. 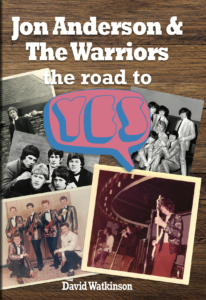 Finally, I’ve have been privileged to get a sneak preview of this new book by Yes expert Dave Watkinson. Dave’s Perpetual Change is a go-to book for anyone interested in the band, but for this project he delved much deeper than anyone has done before, conducting primary research into the origins of the original Yes front-man and the band from his formative years, The Warriors. What is great about this book is not only the insight it gives you into the journey from Jonny to Jon, but it also is a great overview of the 1960s music scene, not from the perspective of a legendary world successful band, but from one who achieved local fame and… well, had a lot of fun doing so! Those of you who have read Tune In: Volume One by Mark Lewisohn and enjoyed the fine details of The Beatles early years will enjoy reading about the journey of this Lancashire band who followed in their footsteps, metaphorically and literally, in the case of their time in Germany.

It’s a book of great stories from people like Ian Wallace (later of King Crimson and who played with Bob Dylan), Brian Chatton (who collaborated with Jon on this year’s 1000 Hands album) and David Foster (Time and A Word co-writer and member of Badger), who went on to further musical careers, but also of the band members who didn’t pursue that path, but who, in most cases, glory in the memory! The book follows the band through many adventures (the author has made me promise to keep the review spoiler free!) and by the final chapters, they are morphing into the band we now know as Yes, with Tony Kaye joining the band, Mabel Greer’s Toyshop coming on to the scene, Mr Bruford coming (and going, and coming again!), right through to some eye witness accounts of some early Yes performances.

If the words were not enough, the book is jam-packed with images from the memorabilia and artefact collection of Dave Watkinson – photos, posters, ads, flyers, new articles, and band documents/ contracts. It’s a dazzling collection and clearly a labour of love which Dave is delighted to share with the world. If you haven’t pre-ordered the (now sold out) hardback edition, the paperback will be out in March 2020, and can be pre-ordered.

Finally, it would be remiss of me to not give a shout out to the book that the prime mover behind this very blog published – Roie Avin’s Essential Modern Progressive Rock Albums. Drawing from a range of interviews conducted with the contributors to these albums, he covers more than 50 of the most celebrated prog albums from the period 1990 to 2016. The books is filled with color images and with in depth comment and facts about the albums which, if you’re a reader of this website, I can guarantee you will enjoy