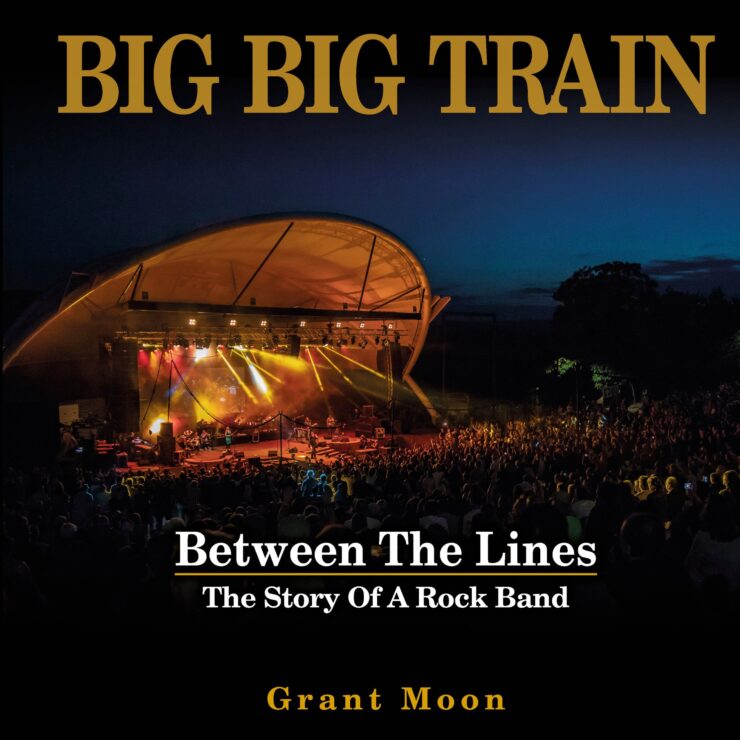 Review of the new Big Big Train book Between The Lines: The Story of a Rock Band

Confession time – I bought a copy of Big Big Train’s The Difference Machine in 2007 mostly because of the special guest musicians who I liked from other bands! That “take a chance” purchase immediately made me a fan, and, as of now, a fan who is excited to be attending the first BBT show with their new line up, an event that will be tinged with the sadness of the absence of David Longdon. But in all my fandom, apart from a few magazine articles and tour programs, it’s been hard to get the true story of the history of the band – a band that in the great prog tradition has gone through many phases and line up changes… until now!

Grant Moon’s Between The Lines: The Story of a Rock Band is quite simply the definitive source material to find out all you need to know about BBT. It has been made with full cooperation of the group, including keeper of the flame, Greg Spawton, but also every member of the band from throughout its history. Anyone expecting a white washed / sanitized / glossed over version of the story’s rockier moments will be disappointed. Without going into detail, there are some situations in the band’s history where paths diverged and … well, it wasn’t pleasant. I find it very admirable that everyone has been given a voice and the chance to tell it from their perspective, which at times can include some brutally honest perceptions of other band members.

The stand out aspects for me are that you get to learn about the entire history of the band, its forerunner bands, and the situation and process of the making of all of the music, from the very early demos. The opening chapters of the book are really compelling as the tale unfolds – the highs and the lows, and the sheer determination that went into writing and committing songs to tape, in the era before you could record a prog epic on GarageBand on an iPhone. I’ve really enjoyed revisiting those releases to get a sense of what was being achieved at those early stages, and the book has really enlightened that listening. The text unfolds at a good pace – it’s comprehensive, informative but isn’t dull or encyclopedic. There are lots of little details and nuggets, but it stays on the right side of being geeky.

The book is also great at pulling both the perspectives of fans and reviewers. I probably wasn’t particularly well connected to online fan groups at the time to know, for example, that “Make Some Noise” was greeted with a… mixed reaction (personally I loved it!). And it’s refreshing to read later of the rapturous reaction that song got when it kicked off the live shows at King’s Place.

The scarcity of BBT’s live appearances makes them slightly unique as a band, and there are some very enjoyable passages about the lead up to and execution of shows at King’s Place and Loreley, as well as the Grand Tour! The Loreley section is a real highlight as the band tell of their nerves and excitement – certainly leaves me excited for the forthcoming release of that show that is promised in the book.

I was delighted to attend the Edinburgh show on The Grand Tour jaunt and finally got to see the band in full force. Grant Moon’s text spells out how triumphant this tour was for the band, and that high is followed by the departure of Rachel Hall, Dave Gregory, Danny Manners and touring member Robin Armstrong in a very short period of time. Each member’s departure is respectfully explained and the remaining members set out the challenge and questions that they faced before the next step became apparent. It’s a story of a band that is not lacking in drama, even when you know how it all panned out in the end, and the skill of the writer is to set this out in an empathetic way, while steering away from soap opera sensationalism.

I must also mention the visuals in the book. While it is a comfortable coffee table size, the text is the priority. That said, it is nicely illustrated with many photos from the group’s history – starting with a 1975 shot of a young Gregory with a snowman, right through to a lovely image of the Welcome to the Planet line up.

The closing sections of the book deal with the band’s lockdown activities and the tragic loss of David Longdon – again the story is told sensitively and truthfully with much love and respect … and it is a sad but fitting conclusion to this volume.

If you’re a Big Big Train fan, you will know the skill, care and attention that goes into the music they make – well the bar is kept just as high for this book as it is for those beloved songs and I consider it a no regrets but for anyone who has enjoyed Big Big Train’s music. If you’re a fan of the band, you’ll know and love them more after reading this fantastic volume!

The book is available for order now from Burning Shed via https://burningshed.com/store/kingmaker.