Between the Buried and Me Release New Song “Memory Palace” 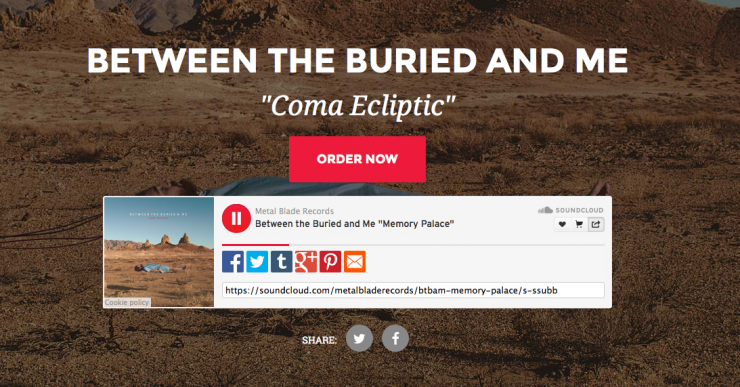 Listen to the new Between the Buried and Me track “Memory Palace” from the upcoming album Coma Ecliptic.

Progressive metal band Between the Buried and Me have released a brand new song from their upcoming highly anticipated, seventh full-length album Coma Ecliptic due out July 7th, 2015.  Fans can listen to “Memory Palace” now by heading to metalblade.com/btbam.

Coma Ecliptic boasts a series of emotive peaks and valleys that drive the narrative along with the lyrics. Singer Tommy Rogers shares: “Coma Ecliptic is a new life for BTBAM. Throughout the process we worked harder than we ever have and really pushed the BTBAM sound to a new identity. In a world of repetition, I’m very proud to be a part of something that is extremely rewarding, as well as frightening. When you don’t push yourself you will never know what the outcome is. The outcome is Coma Ecliptic.”

Coma Ecliptic was recorded in January and February of 2015 with longtime Between the Buried and Me producer Jamie King at Basement Recordings in North Carolina. Drums and piano were recorded with King and Kris Hilbert at the Fidelitorium. Final mixing and mastering was placed in the capable hands of Jens Bogren (Opeth, Katatonia, Amon Amarth, Devin Townsend) at Fascination Street Studios in Sweden.