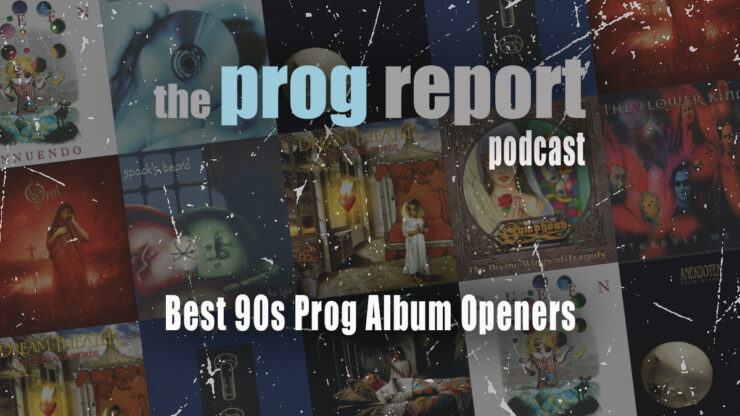 A look at some of the best opening tracks from 1990s prog albums.

If we think of the 1970s as prog’s golden period and the 1980s as the dark ages, then the 1990s constitute the genre’s Renaissance. Sure, many of the classic bands like Genesis and Yes were still trying to corner the pop market to mixed results, but the torch they had lit back in the day hadn’t been extinguished. It was being carried by acts like Dream Theater, Spock’s Beard, Tool, and the Flower Kings (to name just a few of the bands that came of age during the 1990s). They graced us with what we had been craving for; long, technically complex songs rich with texture and enough bombast to make ELP cry. It was the sort of stuff that had defined prog back in the 1970s and now it was being mixed in with new elements – faster tempos, darker sounds, harsher vocals.

Much of what you’ll find on this list contains these components that are central to prog-metal, yet not everything will hit you with the force of a barreling semi-truck. Even though the ‘90s gave rise to heavier music, the decade also saw groups embrace the classic bands more fully and create music that could be considered derivative of those classic bands. Regardless of how one feels about those acts and how closely they shaped their sound on the greats, this list will encompass them along with the prog-metal bands which dominated the decade. The following are among the finest opening statements from the overarching genre we call prog.

From the 1991 album of the same name, Queen’s “Innuendo” sees the legendary group return to its artsy roots. From the ominous synth chords to the soaring chorus, it proves a commendable anthem, but what really elevates the song is the middle section. Featuring the contributions of Yes’ guitarist Steve Howe, it’s a tour de force of flamenco inspired rhythms and acoustic textures which build toward the searing electric guitar solo from Brian May. The fact that it fits in seamlessly with the foreboding verse cements this as a prog classic.

Clearly inspired by two very different aspects of King Crimson, “From Within”, the title track from the band’s 3rd studio album, manages to blend the heavy guitar work with the mysterious mellotron undertones to create something hypnotic. It sets the listener up perfectly for what the rest of the album has to offer and does so without watering anything down.

In many ways, “Even Less” is the start of Porcupine Tree as we know them today. This opening track from the Stupid Dream album, while still maintaining some of the Floydian elements that had dominated Steven Wilson’s previous records, is no longer the defining feature. In place of the psychedelic ambience of Pink Floyd is Wilson’s characteristic melancholy. Now, to sum this up as purely “sad music” would be a gross oversimplification of what this song is doing. It has its moments of sorrow but there’s also confusion, dread, and even a sense of triumph in the chorus. It even ends on an ominous, suspenseful note, utilizing a radio broadcast to unsettling effect. Lump it all together, and you have a great encapsulation of where Porcupine Tree were at this point in their career.

Perhaps the simplest song on this list, “Animate” is the opening number from Rush’s 1994 album, Counterparts. It represents a return to the harder rock stylings of the band’s early records and is driven by Geddy Lee’s propulsive bass-work. The secret ingredient to this song’s success, however, is the subtle use of synthesizers in the chorus. They add a texture which compliments the thick, power trio wall of sound and provide the progressive touch to this rocking anthem.

“Of Sins and Shadows” opens Symphony X’s 3rd studio album, The Divine Wings of Tragedy and immediately delivers the goods that define the album. The tight, highly syncopated riffage of Michael Romeo, Russel Allen’s operatic vocals, and the wonderful, cinematic atmosphere of Michael Pinnella’s keyboards working throughout the background. The highlight of the song though is the bridge with its close harmony, choral arrangement which leads directly into the back-and-forth guitar and synth solos. It’s a flashy yet tasteful conversation that evokes chills when the competing figures come together, sending the song off on a high note.