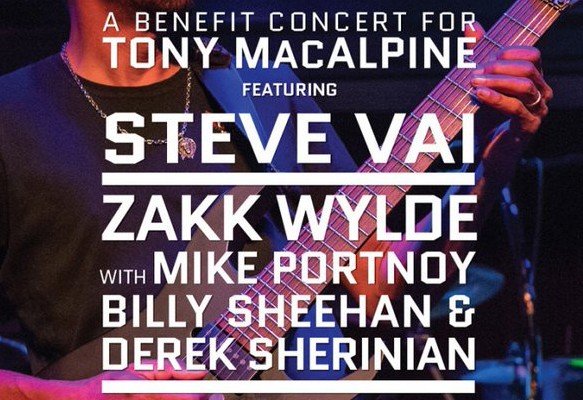 The Benefit for Tony MacAlpine will take place at the Wiltern Theatre in Los Angeles on December 12, 2015, at 7:00pm, featuring performances from John 5 & The Creatures, Zakk Wylde with Mike Portnoy, Billy Sheehan and Derek Sherinian; Steve Vai and band, and culminating in an all-star jam with house band Portnoy, Sheehan, Sherinian featuring special guests. Eddie Trunk will serve as master of ceremonies for the night.

Tony’s cancer diagnosis comes on the heels of his wife’s diagnosis with breast cancer in June, making the situation even more trying for Tony and his family.

“Tony is a dear friend, an absolutely sweet human being and one of the most talented musicians I’ve ever worked with,” says Mike Portnoy, “We are coming together to help raise money and awareness to help him fight his battle and come out on top!”  Adds Steve Vai, “It’s a great privilege to take to the stage with my friends Zakk, John, Mike and Billy in support of our dear friend Tony. Tony has always been blessed with an exceptional talent and more so, he’s an exceptionally cool guy. It’s a great cause and will be a magical evening of guitar extravaganza.”

“Tony has been such an inspiration to me,” says John 5 “He is an incredible musician and an unbelievable talent. Please let’s all come together and beat this!”
“Tony is our brother. We look forward to making a historical night, and raising a lot of money to help our friend in need.” said Derek Sherinian.

Tony MacAlpine is widely known as a guitar virtuoso who is just as skilled on the keys. Edge of Insanity, his classic debut album, was recently ranked by Guitar World magazine as one of the Top Ten Shred Guitar Albums of all time. Aside from his solo work, Tony has also been part of several rock supergroups including Planet X with Derek Sherinian and Virgil Donati; PSMS (Portnoy/Sheehan/MacAlpine/Sherinian); as well as the Grammy nominated CAB with bassist Bunny Brunel and drummer Dennis Chambers. MacAlpine also spent seven years playing guitar and keys in Steve Vai‘s touring band The Breed.
Tony’s most recent album Concrete Gardens was released in May.  Tony toured the US in June to promote the album, but was forced to cancel tours of Asia, Australia and Europe when his health deteriorated.

Tickets are on sale: Saturday November 7, at 10am PT through LiveNation.com, with all proceeds going to help Tony and his family.  A GoFundMe campaign will be set up for fans who can’t make the show, but still want to contribute.

Doors will be at 7 pm with the show set to begin at 8 pm. For tickets, visit www.livenation.com 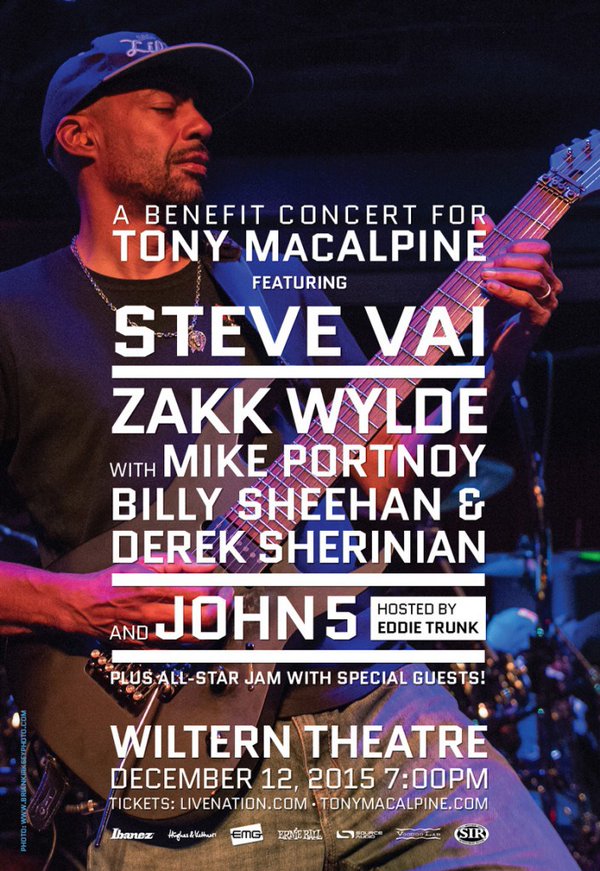