50 years after Fragile: RICK WAKEMAN on the classic album and Yes moving on with The Quest. 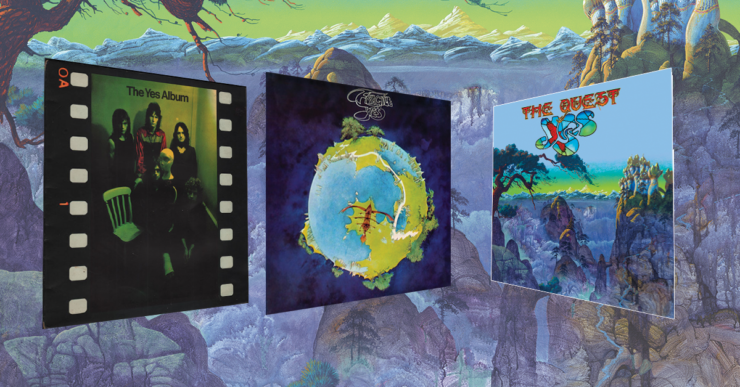 RICK WAKEMAN on Fragile and Yes moving on with The Quest.

It’s more than a little ironic that Yes chose Fragile as the title for the band’s breakthrough 1971 album. In the 50 years since the release of Fragile, this sturdy progressive-rock collective has been anything but. Of course, the band has seen more than its share of personnel changes (not a single founding member remains in Yes today). And the music made by the 19 musicians who’ve been full-time Yes men is as varied and different – decade to decade – as any prog-rock outfit from any era.

Yet the band’s longevity and staying power is unique and undeniable.

• Over the past decade, Yes has headlined a half-dozen Cruise to the Edge seagoing music festivals – arguably the most successful live prog-rock events since the 1970s.
• The band has survived the death of original bassist Chris Squire in 2015, and the departures of co-founder/vocalist/lyricist Jon Anderson and longtime keyboard maestro Rick Wakeman.
• And, perhaps most remarkably, the current Yes lineup – with veteran guitarist Steve Howe at the helm — has just released a strong new album of all-original material, The Quest, and is gearing up for another world tour.

With the release of the new record, it’s worth revisiting the 50-year trajectory of Yes that began with Fragile and the other breakthrough album the band released in 1971– The Yes Album — that launched the group worldwide. Those two extraordinary records first defined the quintessential Yes sound. They set the course for what would lie ahead for the band in the 1970s and beyond. And faint echoes of both albums reverberate throughout The Quest. But Fragile and The Yes Album — along with 1972’s Close to the Edge — also helped lay the foundation for progressive rock in ways that mirror the Beatles’ enduring influence on pop music.

“I knew that the music was very special and very clever,” says Rick Wakeman, recalling the recording of Fragile in an interview for this article. “But what we didn’t know was if the musical public were ready for something like that. And thankfully they were, which was tremendous.”

The former Yes keyboard maestro also has nothing but praise for Howe’s efforts to keep the band going after all these years. “I have tremendous admiration for Steve for keeping the ship afloat, especially after Chris died,” he says. “There are so many bands these days that have got lineups of which, if people came back from the 1970s and could be reincarnated to look at them, they’d go: ‘Who are they?’

“But Yes isn’t the only one. There are so many so many bands like it. And I think if it helps to keep the music alive, then I don’t see a problem.”

Yes was born out of a chance meeting between Anderson and Squire in a London pub in 1968. The pair decided to join forces — along with guitarist Peter Banks, keyboardist Tony Kaye and drummer Bill Bruford – with the heady goal of creating a new kind of music that pushed the boundaries of pop and rock.

Yes Mach One recorded two largely unremarkable albums – Yes’s 1969 eponymous debut and 1970’s Time and a Word. Both displayed potential, but generally reflected a band in search of a signature sound. The big break came in 1971, when Howe replaced Banks and the new band released The Yes Album. The record was miles ahead of the band’s earlier releases. It featured extended musical suites that hinted at things to come – such as “Starship Trooper” and “I’ve Seen All Good People” — and Steve Howe’s Chet Atkins-styled guitar tune “Clap.”

The album was the first to introduce the band’s emerging sound – combining elements of rock, jazz, folk and symphonic music, overlaid with Beatles-esque vocal harmonies and Anderson’s vivid and cryptic word-painting lyrics. It planted a flag for British prog rock, hitting No. 4 in the U.K. charts and introducing Yes to the U.S. But as strong as it was, The Yes Album merely laid the groundwork for Fragile, which arrived nine months later in November 1971. Fragile was the first Yes album to feature Wakeman, who replaced Kaye on keyboards and brought a classical background and a wider variety of keyboards and playing styles to the band.

Fragile was groundbreaking in that it featured just four lengthy tracks – written, arranged and performed by the band — along with five shorter solo works showcasing the individual talents of each member. On the whole, the album marked a new maturity and sophistication for Yes. Every note is perfectly sculpted and placed – reflecting each player’s extraordinary technical chops and compositional talents. The album was a massive commercial and critical success, rising to No. 2 in the U.S. charts and No. 7 in the U.K.

But Fragile also revealed Yes to be a breed apart from other prog outfits of the era that were largely driven by the vision of a single composer or performer (i.e. Ian Anderson’s Jethro Tull and Robert Fripp’s King Crimson). Yes featured five very different musical personalities, all of whom contributed to the writing and performance of the music.
The result was a distinctive sound that was cohesive and tightly orchestrated, yet still allowed space for each member to stretch out and shine in his own right. This was the secret sauce that made Yes music more than simply the sum of its parts or a showcase for the dazzling virtuosity of the band.

Fragile: Yes at Its Best

Fifty years on, Fragile is regarded by many fans and critics as the band’s finest studio effort (although a strong case can also be made for 1972’s Close to the Edge). The album features Yes’s most well-known song, “Roundabout” and three other tracks that remain staples of live Yes shows to this day: “South Side of the Sky,” “Long Distance Runaround,” and “Heart of the Sunrise.”

All four are mini opuses that reflect the band’s sophisticated songcraft and showcase all of the things Yes does so well — Bruford’s jazz-influenced drumming, Squire’s bass-as-lead-guitar approach, Wakeman’s Elizabethan rock flourishes, Howe’s dazzlingly eclectic fretwork and Anderson’s elfin vocals soaring above it all like a white bird over a raging sea.

In more ways than one, Fragile hinted at what was to come for Yes. Throughout the 1970s, the band would expand on the template Fragile laid down – combining virtuosic solo performances with complex band compositions and ensemble playing. Close to the Edge, Tales From Topographic Oceans and Relayer all build on the ground Yes broke with Fragile.

In the decade that followed the album’s release, Yes would become one of the most successful of the British progressive rock outfits of the era. In the 1980s and early 1990s, the group reinvented itself as a pop-prog outfit, with various lineups. Since then, the band has continued to tour and record as an off-again, on-again collective with Howe and longtime drummer Alan White (who replaced Bruford in 1973) continuing to carry the Yes banner forward.

The arrival of The Quest this month makes clear the Yes juggernaut still has staying power, even though Howe is the only band member who remains from the classic lineup that recorded Fragile. The new album may not have the ground-breaking quality of Fragile or The Yes Album (how could it)? But The Quest still contains enough distinctive Yes elements to satisfy long-time fans of all eras of the band.

Among them: Wakeman himself.

Looking back to the band’s first rehearsals for Fragile, in August 1971 at London’s Advision Studios, he says he knew from the very beginning that the music Yes was making was unlike anything he’d known before as a session player with David Bowie, Cat Stevens, the Strawbs and other talented musicians.

“I did think that there was something very very special about it,” Wakeman says. “I’d never worked in the way that Yes worked, which was like in the form of a jigsaw.

“Everybody comes with little pieces and then it seemed to be that my job – the reason I came in, really — was to put the pieces together and make them coherent as a larger piece, which I loved doing.”