YES – From A Page (Album Review) 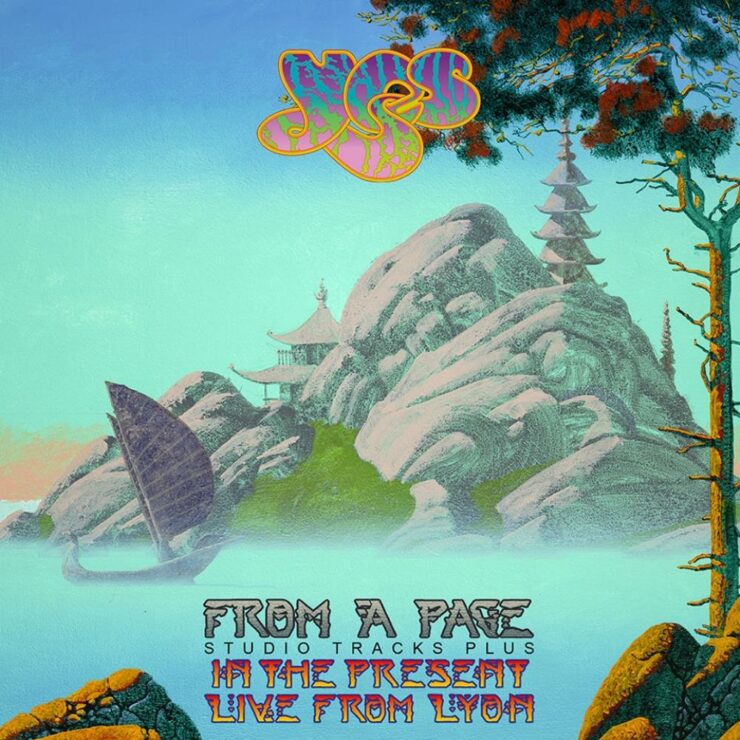 Review of the new YES boxset – ‘From A Page’

Wow! That was a surprise! It’s unusual in this day of pre-orders that an album appears and is available on the day it is announced – but that’s what has happened with the new Yes release From A Page.

For anyone not aware of the band’s history, when Jon Anderson took ill in 2008, and Rick Wakeman decided not to continue, the remaining band members, Steve Howe, Chris Squire and Alan White, brought in vocalist Benoit David and keyboard player Oliver Wakeman, to reactivate the band and tour, successfully keeping the band/ its name alive. After several years of successful touring, the band began exploratory writing and recording sessions which ultimately resulted in some typical Yes personnel reshuffles, with former Yes members Geoff Downes (keyboards) and Trevor Horn (production) returning, bringing with them song ideas which ultimately took the place of some of those developed by the touring line up. Songs were set aside and replaced by those that Horn and Downes had developed and remained unheard – until now!

In a process that was sparked by the passing of Chris Squire, and which has continued over the last few years, Oliver Wakeman has labored to bring some of the recorded, but previously unheard material from the 2010 writing/ recording sessions, to release, with the approval of Yes, in this deluxe box set. The box set is filled out with the Live In Lyon album, until now the only official release by this line up during its existence. So how does it shape up?

What we have here are four new tracks (five if you include the Edit of one track on the vinyl). Three of these are full Yes performances and one is a contemporary song which has been complete in a sympathetic way. Kicking off with “To The Moment” it’s obvious that this is “proper Yes” rather than scraps or leftovers. This isn’t a “Free As A Bird” pieced together from spare parts… it’s clear from what you hear that this was a track completed to a very advanced stage with overdubs, backing vocals and everything you’d expect in a fully fledged song. As a lead off track it is extremely strong – Chris Squire’s distinctive vocals and bass are present, and the dueling soloing of Howe and Wakeman demonstrate the incredible strengths of both players. Benoit David’s vocal performance is superb showing his capabilities extended beyond just being a mere Anderson fill-in. On “Fly From Here” it was clear to many, and subsequently acknowledged, that in many cases Benoit was re-singing Trevor Horn’s guide vocals, complete with what I would call “Horn Vowel Sounds” (if you don’t know what I mean, listen for the emphasized Es when Benoit sings “Fly From HEEERE” or “RIEEDING the Tiger”). I have to say on first listen this track blew me away, and with repeated listenings it still feels like an extremely strong Yes track, of a different kind to what we got on FFH.

“Words On A Page”, the almost title track, is next. Perhaps the strongest song on the mini-album, it’s a more relaxed and softer song than we’ve heard from Yes in a long time. If I could draw a parallel, the acoustic guitar and piano lead in, with wonderfully sympathetic playing by Howe and Wakeman, “Turn of the Century” is what springs to mind. As we hear in this and the next track, Benoit is singing comfortably in a slightly lower register than Yes lead singers usually do, but it’s no less Yes-like in its execution. As bass joins with a beautiful counterpoint, White presents light drum rolls and rhythms which underpin the expanding melody. A real highlight of this track is a superb slide guitar solo from Howe, which follows a mid song quieten-down. Simply put, this is just Classic Yes of a kind we have never heard before.

I had mentioned before that a contemporary track “Turn of a Card” is included here which isn’t quite a direct product of the recording sessions. It turned up in a full band version, with Benoit singing, on a joint Oliver Wakeman/ Gordon Giltrap album. However, for this version (of a song written by Oliver at the time of, and envisaged as a contender for, the next album), Wakeman has take Benoit’s vocal track from the Giltrap version, and augmented it with a lovely piano part. It’s a very worthy addition to the album and very much in keeping with what precedes and follows it.

Finally this mini-album ends with an almost 10 minute epic. Writing is credited to all five members, and Wakeman explains the origins of the song in the detailed notes which are included in the accompanying booklet.The core of the piece is constructed from parts written by Squire and him – echoes of “The Game” – a track from the most recent Yes studio album, Heaven and Earth – are present but that’s all fine. Again, the recording captures what sounds like a fully recorded song, with backing vocals and instrumental solos present. Pastoral but powerful, this is another great song and one I’m certainly glad to be able to hear.

The “Live in Lyon” double live CD is also part of the passage. Let’s face it there have been quite a few (4 in fact) live Yes albums since this one was released. Revisiting it, it did surprise me at how different it sounds to what has followed. The timbre of David’s voice lets you know it’s him – and not either Jon – singing. The set list goes deep with “Astral Traveller”, “Machine Messiah”, “Onward” and “Tempus Fugit” rarely performed tracks at that point in Yes history, and even something like “South Side of the Sky” being an outlier track. They are all superbly performed with energy and gusto, and it’s hard to find fault with what’s here. Even something like “Owner of a Lonely Heart” is performed possibly in the best Howe-band version I’ve heard. Oliver Wakeman was a great addition to the band – able to cover the styles of Kaye, Downes and his father in this release, and getting the balance right between playing all the notes the faithful want to hear, while bringing his own style to bear.

In summary, I expect a huge “Thank You” to Oliver Wakeman (certainly from me!) for this box set and the glimpse of what was and what could have been that it gives us. For Yes fans, it is a must-have release, and a package that is a worthy tribute to that under-represented album / era.