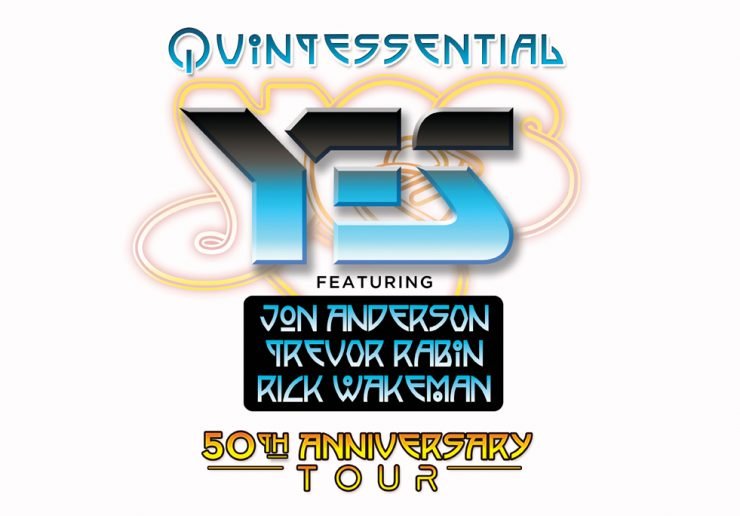 2018 marks the 50-year anniversary since the formation of one of rock’s all-time ground breaking supergroups, YES. And to mark this milestone, YES Featuring Anderson, Rabin, Wakeman will be celebrating by touring the world as part of ‘Quintessential YES: The 50th Anniversary Tour.’ In addition to what is promising to be truly memorable shows that span the band’s career, there are also several upcoming YES-related events and releases in store, including:

The 100 show World Tour will commence on June 3rd 2018 in Warsaw, Poland, and feature shows in Scandinavia, Germany, UK (including headlining the Stone Free Festival at the O2 Arena in London) and North America in 2018, going on to South America, Central and Southern Europe, ending in Japan and the Far East in 2019.

YES Featuring Jon Anderson, Trevor Rabin, Rick Wakeman will return to their roots by performing at the Whisky a Go Go, the iconic venue they first performed as a headliner in June 1971. Information on tickets to this show will be available at a later date.

The band will then play 9 shows in August and September including the Greek Theatre in LA on August 29th and Chicagoland’s Ravinia outside on September 7th before continuing the US Leg with 20+ shows in early 2019. Most dates will be going on-sale starting April 20th.

There will also be released in August/September by Eagle Rock a Live CD and DVD of the band’s show from March 2017 recorded live in Manchester, UK, featuring special mixed in OE Audio by Paul Linford and Trevor Rabin.

In addition to all of the above, the band are currently hard at work, creating some stellar new recordings for their 50th Anniversary. This will be the first new music in 28 years featuring Jon Anderson/Trevor Rabin/Rick Wakeman together. It is planned these will also be available for release by the end of 2018 or early 2019.

The most successful progressive rock group of all time, 2017 Rock & Roll Hall Of Fame inductees YES, was co-founded by Jon Anderson and the late Chris Squire in 1968. They went on to sell millions of units with releases such as The YES Album, Fragile, Close to The Edge, Tales From Topographic Oceans, Going For TheOne and 90125, as well as embarking on several record-breaking world tours.

Whilst Rick is predominantly associated with the ’70s “prog era” of the band (which saw YES become a worldwide stadium headliner) and Trevor associated with the ’80s “mainstream era” of the band (which furthered the band’s popularity – including the band’s biggest chart success 90125), Jon is the bridge between both factions (as he was a guiding vision of both eras). The touring band line-up is completed by two extraordinary musicians – Lee Pomeroy on bass and Louis Molino III on drums – who help to ensure that YES’ immaculate artistic legacy remains intact.

The worldwide tour with YES Featuring Jon Anderson, Trevor Rabin, Rick Wakeman is being produced by renowned concert promoter Larry Magid, who is considered an architect and leader of the modern concert business. With over 17,000 concerts and live events to his credit and still counting, he has produced national and international tours for YES, Billy Crystal, Richard Pryor, Bette Midler, Stevie Wonder, Robin Williams, Gladys Knight, The Isley Bros., Earth Wind & Fire, ARW, Il Divo, The Allman Brothers Band, Patti LaBelle, Grover Washington Jr. and many others. In 1985 Larry Magid, co- produced the American portion of Live Aid, and in 2005, he was the American producer of Live 8. In 2001, he produced the United We Stand concert at RFK Stadium to benefit the victims of the Sept. 11 attacks.

PLUS ADDITIONAL DATES TO BE ANNOUNCED SOON!