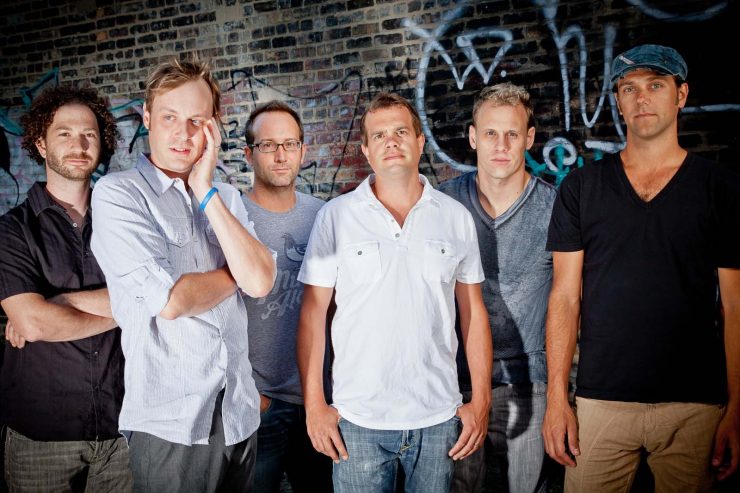 Joel Cummins, keyboardist for Umphrey’s McGee, talks with The Prog Report about the band’s latest album, Similar Skin, and more.

Joel Cummins, keyboardist for Umphrey’s McGee, talks with The Prog Report about the band’s latest album, Similar Skin, how they chose the songs for it, playing in Europe and more.

Get Similar Skin now on iTunes.

So how does it feel being  just about the busiest band around?

Yeah, we have a lot going on right now.   We can’t blame anybody but ourselves, we are the ones who decided to create our own record label, put out an album, and you have to go out and play shows once you do that.

Congrats on the new album, Similar Skin, which has been out about a month now.  How has the album been doing?

Has it been that long already?  Like you said we’ve been pretty busy, we put the album out last month in the middle of June, went to Bonnaroo, went to London, came back, played at Electric Forest and a couple of other tour dates in the middle there and then finished up at Red Rocks last week.  So, yeah, it’s been a fun ride so far.  This album is something that feels like a longtime coming and we really knew what we were doing and what we were going after on this one, and I think you can hear the results with the rock vibe of the album.

Some of the songs on the album have been played live for a long time, some are newer.  How did you choose which songs made the album and what went into those choices?

We kind of took a look at where our newer material was heading as far as direction goes and we had a number of songs that had that rock vibe and those were Puppet String, Linear, Hourglass and then there were a few that we were working on writing, Educated Guess, Cut the Cable was definitely in the mix, and Hindsight, Little Gift those were tunes that Jake brought to the table.  We kind of started with this larger group of songs, after that went into a pre-production phase and tried to work on some newer ideas as a group and came up with some of the songs that way as well.  And then as previously mentioned  a couple of the older ones we included were Bridgeless, which we’ve tried to record before in 2006 for 15 numbers and also again for Mantis in 2009 and we weren’t happy with how those turned out at the time.  We finally got a good version for this one.

I’m surprised “Bridgeless” didn’t fit on Mantis since it has a progressive sound to it.

It was more about the performance and how it would fit because it definitely would have fit that vibe. The other thing with Mantis too was we were trying to put an album out of all new material so that was another reason why we didn’t choose Bridgeless.

“Bridgeless” been performed in various lengths, anywhere from 24 minutes to 7 minutes and more.  How did you settle on this 9 minute version and know it was the right one?

The place where it kind of opens up is towards the end, so for this particular one, we knew we wanted a really tight concise version of it. There are lots of ways we’ve played it live but anytime you go into the studio we are not necessarily trying to do the same thing that we’re doing live.  While that session was intended to invoke that same kind of feeling of building an excitement like we do with the live version we were just trying to treat it more like a song and how would it go if everybody wasn’t running around on stage and have just a concise, what we needed performance.

“No Diablo” is very different than the rest of the album, how did that one end up making the album?

It’s one of the newer tunes.  We’ve probably only been playing that for about a year.  We were finishing up in the studio and messing around and that one got included just to have a little taste of sweetness to go along with heaviness of the sound on there.  Thematically it works where its placed earlier in thee album.  We have some of those shorter hookier songs to start out with even though they are a little bit heavier.  Once Similar Skin kicks in, that’s kind of the second part of the album where things get a little more progressive from there.

You recently did a few shows in London.  Do you see a difference in the audiences when you play internationally?

We’re an acquired taste.  It’s very difficult to get what we are about in one performance so no matter where we are in the world, the first time you go somewhere, it’s a little bit foreign to people.  You know that the 3rd or 4th time you go back that people kind of warm up and are starting to get it.  This was our 3rd, 4th and 5th time in London so the audience is definitely young as far as that goes.  I think there is a cool level of enthusiasm.  There was a wide mix as far as the ages of people from their late teens to to upper 50’s and early 60s.  In the US typically if we’re playing a festival its going to be mostly ages 18-35 or something.  So it was a little bit of a wider mix but people were into it.  It was definitely a great thing to be able to go over and do that.

Do you guys consider yourselves a “Jam band” because you don’t sound like the Grateful Dead or bands like that.  So how would you describe yourselves if you had to?

You know, there’s not really a way to define the experience of our live show which is a good thing.  I think our sound in general is kind of Progressive, maybe Progressive rock.  Its funny, because so many people who think “I know Umphrey’s McGee as a jam band” then they show up and think “It’s way heavier and different than I thought.”