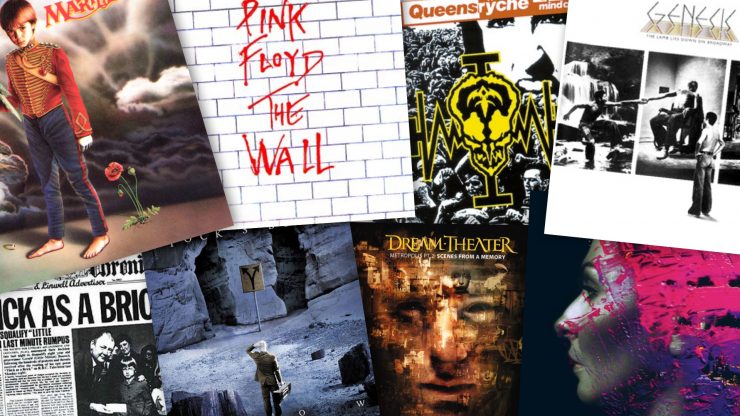 Perhaps no other debate is as highly argued in the world of prog rock as ‘which is the greatest concept album?’  We have put together what we think is a collection of some of the best including a few recent releases.  Which is your favorite?

Misplaced Childhood is the third studio album by Marillion. This was the group’s first full concept album, featuring thematic elements of lost love, sudden success, acceptance, and lost childhood, along with an upbeat ending. It also features the band’s biggest hit to date “Kayleigh.” It remains one of the group’s most celebrated releases.

The Human Equation is the sixth album from the progressive rock project Ayreon by Dutch musician Arjen Anthony Lucassen. The album takes place almost entirely in the mind of a character called Me (played by James LaBrie of Dream Theater) who is in a coma after a car accident, with each song consisting of one day spent in coma. It features guest appearances from several musicians, Mikael Åkerfeldt of Opeth, Eric Clayton of Saviour Machine, and Devin Townsend.

The Similitude of a Dream is the second album from the Neal Morse Band, another Neal Morse/Mike Portnoy group featuring Eric Gillette, Bill Hubauer, and Randy George.  Using the Christian allegory The Pilgrim’s Progress as the backdrop, the group weave various styles, themes, and share vocals, culminating in an epic climax for what Portnoy calls ‘one of the best albums of his career.

Hand. Cannot. Erase. is the fourth solo studio album by Steven Wilson and his most successful release to date.  the concept and story are inspired by the case of Joyce Carol Vincent, where a woman living in a large city dies in her apartment and no one misses her for over three years, despite her having family and friends.  Performances by Guthrie Govan, Marco Minnemann, Nick Beggs, and Adam Holzman help elevate this stunning collection.