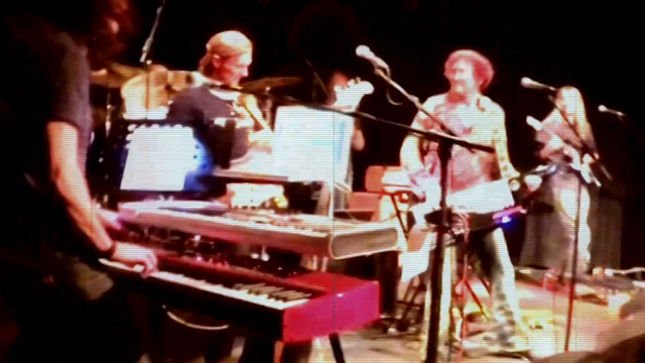 British Prog Rock The Tangent have released a new lyric video for the title track from their upcoming album “A Spark In The Aether.”  This comes from the bands eighth studio album ‘A Spark In The Aether – The Music That Died Alone Volume Two’ which is due out on April 20th, 2015 in Europe and April 21st, 2015 in the US.

Check out the new video here:

The band, led by multi-instrumentalist Andy Tillison, is made up of Jonas Reingold (Bass), Theo Travis (Sax & Flute), Luke Machin (Guitar) & Morgan Ågren (Drums) and Andy had this to say about the track:

“A Spark In The Aether” is the title track of the new album by The Tangent. In many ways it’s a bit of a rallying cry to people to keep open minds about newer music in a world where remasters and re-issues are more eagerly anticipated than new material. But it’s a hugely optimistic piece that’s primarily about keeping a young spirit as you go through life. The song was premiered on the 2014 tour and was filmed by several audience members who uploaded their clips of it to Youtube without knowing that we would use their clips to make our video. Of course it’s an alternative version of the studio recording you’re hearing as the soundtrack. We wanted to make a video that showed the real energy of the band on stage, something that has always been important to the group who have never set much store by big light shows or video projections. “We do it with our bodies” is the philosophy. And what the fans do with our music, we use and give back to them.

A Spark in the Aether andy tillison prog rock the tangent