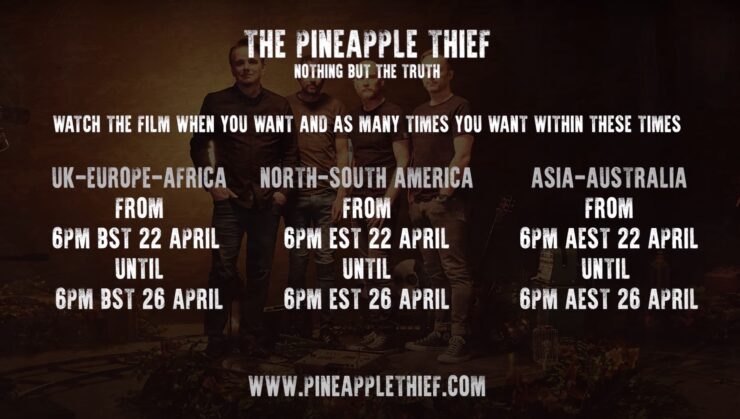 The show will be broadcast on April 22nd, from 6pm UK time and available on demand until 6pm UK time on Monday 26th April.

The Pineapple Thief have announced an “on-demand” live performance event, entitled Nothing But The Truth. The show will be broadcast on April 22nd, from 6pm UK time and available on demand until 6pm UK time on Monday 26th April.

For more information, tickets and exclusive merchandise head over to https://www.thepineapplethief.com/thetruth/

Watch the trailer for the even here:

Bruce Soord: “I’ve always said that The Pineapple Thief is equally about the studio and the stage so it was obviously disappointing that we haven’t been able go out on tour especially as we were excited to be able to perform the new album “Versions Of The Truth” live for everyone. So being able to do this film, especially under the circumstances, was invaluable. We all knew we did not want to shoot a film of us standing on stage staring at an empty room. We wanted something special, something ‘cinematic’. So, together with George Laycock (from Blacktide Phonic/Visual who has filmed all our recent music videos) we hatched a plan. It was a lot of work for one show. But it was worth it. And it was great to be playing in the same room with the band again. We ended up making something unique and something very, very special that I am proud to have been a part of. I can’t wait for people to see it.”

Gavin Harrison: ‘”Nothing But The Truth” is a highlight for this band in terms of captured performance. After many months of planning and rehearsal we went to a top sound stage studio and recorded the show that we were meant to do in Covid times (but had to cancel). Filmed and recorded in the highest quality under controlled circumstances it does represent the band and the songs in a way that is so different to a ‘live gig’ or ‘live album’. We thoroughly enjoyed the process of making it and hope you enjoy this one-off very special event.’

GENERAL TICKET PRICE: Ticket Price $19 (or the equivalent in the local currency, the streaming platform supports every currency). Tickets will remain on sale until 4pm UK Thursday 22nd April

HOW MANY TIMES CAN I WATCH THE FILM? Ticket holders can log in and watch the concert as many times they wish within the on demand period.