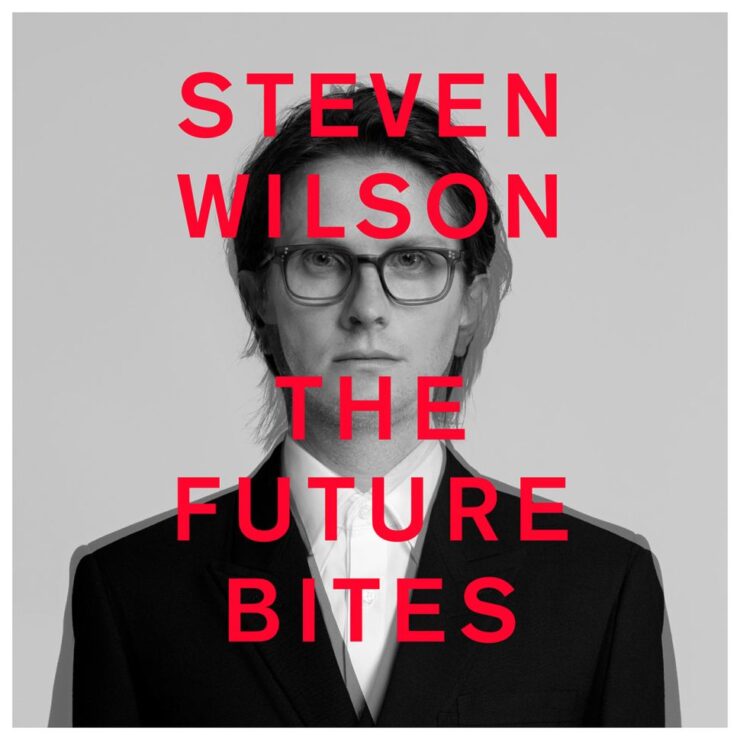 Review of the Steven Wilson album – The Future Bites

It isn’t easy being a prog artist these days, I imagine. I’m not referring to the effects of the global pandemic or, even worse, Spotify – what I mean is when it comes to the expectations of your fan base! Prog fans tend to be loyal and devoted, but also analytical and… at times, vocal online. You will hear fans express disappointment if subsequent albums by a band / artist follow a similar style and haven’t “progressed”. Equally, some fans will be outraged when an artist stray outside of the lines within which we expect them to operate. The pre-release reaction to The Future Bites was a great illustration of this… “Wilson abandons prog … Wilson goes techno” etc. Maybe by now, the release date delay and periodic single releases (accompanied by some great b-sides which already have their own EP) have given listeners the chance to ease themselves into “The Future Bites”… or maybe it has given them the opportunity to draw and extrapolate conclusions from the excerpts they have heard. So… what’s it like?

Well in simple terms, it’s a 41 minute album, with 9 songs. The tracks share common themes of consumerism, identity and the use of technology – I would use the King Crimson term “An Observation” to describe how this is approached. It’s not a preaching / finger pointing session but rather it’s an artist reflecting on the world as he sees it.

In terms of musical styles, anyone familiar with Wilson’s catalogue, including Porcupine Tree, No-Man and his solo albums, nevermind his more experimental music, should hopefully not be shocked at what they hear… but this is an album like no other in his catalogue.

The Future Bites starts with “Unself”, a demo-like recording combining a simple melody, sparse instrumentation along with found sounds/ voices, which flows into the connected “Self”. Kicking off with a synth/ EDM style backing, the sound is quite reminiscent of the last No-Man album, “Love You To Bits”, with some 70s/80s era Bowie-ish rhythm guitar, and female backing vocals. It’s certainly not “The Raven…” but it is inherently Steven Wilson in its lyrical content and approach. Many will already be familiar with the next track “King Ghost” from the stunning video that came out in 2020. With a falsetto chorus refrain and very few traditional instruments backing, this is not Porcupine Tree Redux, but it’s intriguing and interesting music. Similar to “To The Bone”, just when you start to think ‘Oh the album is going to be like…’ you are struck by the strumming acoustic guitars of “12 Things I Forgot”. It’s a great song and cut from the same cloth as perhaps “Lazarus”, “Happiness III” or “Nowhere Now” from previous albums. Lyrically it focuses on relationships and its open confessional style serves as a mid point/ break in style and the perfect palette cleanser for what comes next.

“Eminent Sleaze” was one of the early singles from the album and it has a rich blend of musical elements – some of which may have initially been a barrier to some people seeing what’s actually within the track. Lyrically, and in the song’s character, I hear elements of a Roger Waters/ Animals-style critique of the businessman delivering the song, while the backing singers provide nursery rhyme repetitions, like a Greek chorus commentary. Then a guitar rips in, unsettling the metronomic and electronic backing… a trace of humanity, or perhaps a reflection of the discord and chaos that the character creates. Every instrument and every sound feels carefully chosen to tell the story, and the stunning production allows each of these elements to play their part. “Man of the People” that follows feels like a pause for breath, with a drum machine backing blended with Floyd-y guitar strums and vocal effects.

“Personal Shopper” is the album’s centre-piece and perhaps the track you’ll either love or hate (and many people online have already expressed an opinion). I’m not going to dive into to the – is it prog? – debate. What I will say is this… it’s clear from the album’s marketing and packaging that consumerism is this album’s central theme. In that context, the musical styles combines with the lyrical content, and produces a coherent whole. It’s clever in its light and shade, has a chorus that sticks in your head, and includes what I think is a hilarious middle section where perhaps one of the most notorious self-confessed consumers of our age, Sir Elton John, rhymes off a shopping list of mostly pointless items that grab our attention (and cash). Irony is certainly present in great measure within a track performed by the rock’s go-to guy for the enhanced classic album remix, when he calls out:

Wilson combines having his tongue very much in his cheek, with making a serious point – it’s not unlike, say, Pink
Floyd’s “Money”, when Roger Waters called out elements of the system that he was gradually, and it would seem willingly, being drawn into.

I fully understand how as a single, this was a polarizing track for many. Hearing it in the context of the full album, it makes a lot more sense and I enjoy it a lot more now than when I initially heard it as a single.

The burbling synths are then set aside for what is perhaps a more traditional rock track, “Follower” – a striking call out of the fickle world of social media and influencers. The fast paced, drum heavy backing once again matches the music with the subject matter, and the crash and bluster of the percussion mimics the relentlessness of social media’s barrage in our lives today.

The album’s closer “Count of Unease” is a stripped back lo-fi contrast to the EDM moments earlier in the album. Wilson’s naked voice accompanied by a piano and some sort of percussive shaker, it’s the song of an outsider, a character in despair. At roughly the halfway point, an almost ambient keyboard backing and effects treated guitar, take over before Wilson’s vocal returns. My interpretation of this conclusion is that it’s a glimpse of the emptiness that remains when the artifice of online profile and possessions is stripped away. It’s not an upbeat, arms in the air ending, but it’s a very effective one in the context of the concept.

In conclusion – and you may have gathered – I really like this album. Initially that was not the case, but having spent time with its music and lyrics, I believe it is a clever concept album, whose message is absolutely relevant for our time. While the album imagery may be start and upfront, it conveys the messages in a gently challenging way, with some endearing dry humor. Wilson’s Album Series of podcasts with Tim Bowness have shown he’s a man of very eclectic musical tastes and this album brings many of those sounds and styles he enjoys to the fore, as colors on his artist’s palette. My conclusion is – listen without prejudice … listen more than once… and you might end up enjoying it as much as I have.