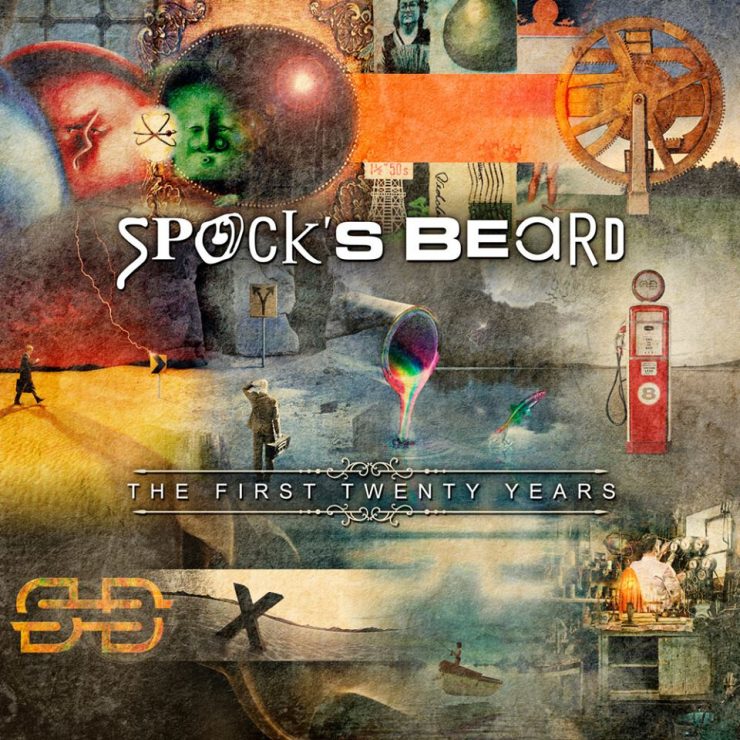 In somewhat surprising news, Spock’s Beard have announced a Best Of compilation called ‘The First Twenty Years’ which comes out November 20th, 2015.  Arriving as a special 2CD & DVD package, it includes a selection of the best tracks from their entire career, as well as a brand new 19-minute long track titled ‘Falling For Forever’ that features every member of Spock’s Beard past and present performing, including Neal Morse (who also wrote the track), Nick D’Virgilio & current vocalist Ted Leonard.

All the tracks have also been re-mastered by long-term collaborator Rich Mouser, and the DVD portion of the release will feature old, live and archival footage from the band’s impressive 20+ year career.

Dave Meros talked about the album: “We’ve discussed the idea of a “Best Of” release on-and-off for several years, and it’s finally come together. Of course, there were some tricky issues to work through. Deciding which songs would best represent the band over 20+ years, 12 albums and three different lineups was challenging enough, but add the fact that a lot of our songs clock in anywhere from 8 to 20 minutes or more and the selection process became that much more daunting to make everything fit. Finally, after a lot of back-and-forth between everyone involved, we’ve come up with a song list which we think represents each album and era of the band quite well.

That left us with another concern though. We were adamant about not wanting to just release a bunch of our earlier material in a new package, especially to loyal fans who probably own most, if not all of our albums already. With that in mind, Neal came up with the new epic “Falling For Forever” which clocks in at almost 20 minutes and was written specifically to include all current and past members of the band. Luckily, everyone’s schedule lined up to be able to record it and even better, Rich Mouser was available to record and mix it as well as remaster all of the earlier songs. Add to that a DVD with a lot of previously unseen video footage from the early days of the band and we think we have a package our fans will really get into.”

Neal Morse had this to say about the release:
“As we were kicking around the idea of a Spock’s Beard ‘Best Of’, the idea of having some kind of an additional track came up. I felt, as always, like it would be more exciting to do something new than to rehash something we had already done. Then one morning I got inspired and wrote the music that would become ‘Falling for Forever’. It was a lot of fun writing for the Spock’s gang including Ted and Nick’s voices… I definitely had them all in my mind… and I think the end result is really, really cool. Al is killing it on guitar, Dave’s bass tone will take the paint off your walls, Ryo is ripping on the keys as usual, and both Jimmy and Nick trade off drum solos toward the end of the song! Ted sings the choruses, Nick sings the middle section, and I sing the verses. It’s truly a team effort. The SB fans are going to love it!”

‘The First Twenty Years’ showcases just how important Spock’s Beard have been to progressive rock since their formation in 1992, and how consistently brilliant they remain to this day.