Sons of Apollo – ‘Live With The Plovdiv Psychotic Symphony’ (Review) 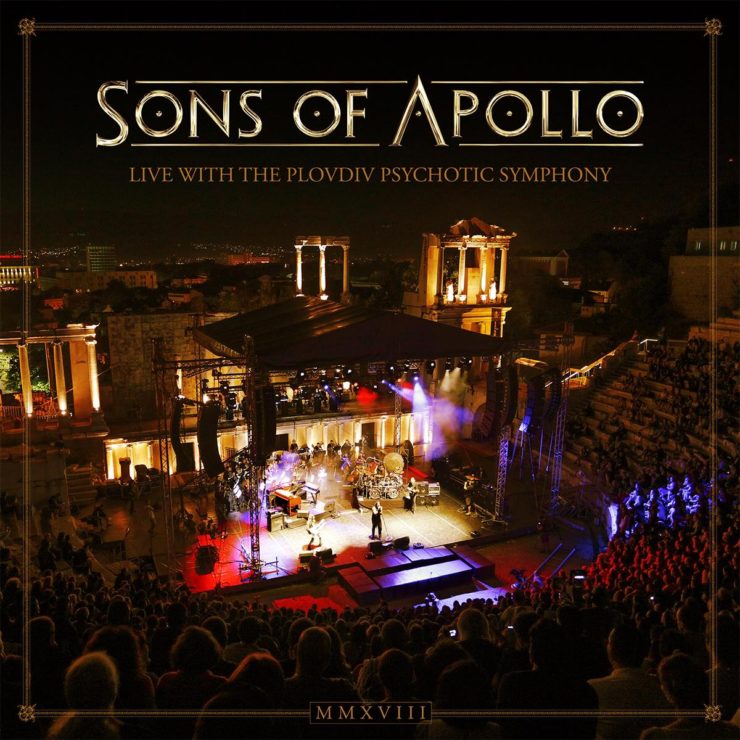 Review of Sons of Apollo – ‘Live With The Plovdiv Psychotic Symphony’ out on August 30th, 2019.

Sons of Apollo’s debut ‘Psychotic Symphony’ was top of many Best Of lists in 2017. For me, the lightbulb moment was seeing the band play live in a club in Belfast, my hometown (which in itself is not regularly frequented by prog bands!), when they lifted the venue 30 feet off the ground, and then spent hours chatting to fans outside the venue on a warm summer night (equally uncommon for Northern Ireland!). Perhaps I over analyzed the original album a bit, or expected it to be a certain/ different thing. Either way, that was night that I “got” SOA. It was clear that this collection of virtuosos not only had the chops, but they had the ‘bandsmanship’ (I’ve made that word up?) to bring an audience and a venue to life and even exceed the expectations of a group of people who didn’t need to be won over. So a live release reflecting the X-Factor that those shows had has been much anticipated.

The setting for this show isn’t a dark sweaty club – oh no. The grandiosity of the performance is reflected in the venue chosen: an Ancient Roman Amphitheatre in Bulgaria! While you’re at it, why not add a full symphony orchestra, and choir, and play an additional set of cover versions to create the iconic SOA performance?

‘Live With The Plovdiv Psychotic Symphony’ is the complete SOA package – it gives you all you need to know about where they came from, be that their influences, reflected in the covers set; the story of the recording of the album, and the behind the scenes story of this monumental gig (and anyone as entranced by this as much as I have been will be glad to know we won’t have to wait too long to find out where they’re going next, with a new album well under way, it seems.

The first set is pretty much a reflection of what anyone who saw the band on tour heard in the regular set list… a large number of the album cuts, solo spots from Bumblefoot, Sheehan and Soto, together with a song from the Sherinian era of Dream Theater, “Just Let Me Breathe”. For me, the live versions of the album tracks have that extra spark and energy – “God of the Sun” is a brilliant opener, with its bombast, while debut single “Signs of the Times” rocks harder, with the Soto/Portnoy vocal combination in the verses, and collective harmonies in the choruses showing this band are more than just ‘shred’. Closing the band-only set is “Opus Maximus” which is a prog tour de force, as if you were in any doubt by this stage that the band could pull this sort of thing off!

Bulgaria, where this was recorded is culturally a melting pot with influences, gathering cultural influences from Greek, Slavic, Ottoman and Persian nations. That’s an (unplanned I’m sure) metaphor for the second set represented here where, not only do the American band combine with a European choir and orchestra, but the song selection traverses many styles and cultures, reflecting many of the band’s influences. “Kashmir” and “Gates of Babylon” which kick the set off are both songs that feature Eastern influences both in the musical and lyrical content – I have to say that the moment that choir and orchestra kick in during the chorus of “Gates…” the hairs on my arms stood up! Having the band and orchestra on tap also means the band can tackle full blown versions of more traditional tracks such as “Dream On”, “Comfortably Numb” and Queen’s “The Show Must Go On”. There are many highlights in this covers set: Portnoy as ‘The Doctor’ in “Comfortably Numb”, which concludes with Bumblefoot’s respectful but personalized version of the closing guitar solo of that track; Soto showing us he can take on Ozzy, Freddie and Steven Tyler and deliver; Derek pulling out all the stops, complimenting the orchestra while coming to the fore in the intro to “Gates of Babylon”; and it goes without saying that Sheehan and Portnoy are a shape-shifting rhythm section across this range of songs. In an era where our clubs and theaters are filled with cover tribute bands, this isn’t just a soundalike show. It’s more of a retrospective mission statement, with SOA saluting the music that made them who they are today, and which they get a buzz playing themselves – and you can see in the video that the crowd are ecstatic with the song choices and performances.

The video does deserve its own mention. Obviously, the venue itself provides an amazing backdrop for the show, but that in itself doesn’t necessarily make for a great video presentation. This is one of those truly immersive video experiences – no annoying fast cuts but instead a blend of wide shots of the setting and audience, close ups that highlight the “octopus pedigree” of the players , and magic moments that capture the sheer enjoyment this band have in stage – a smiling / crowd-conducting Portnoy features frequently!

The show ends with the band back on stage minus the additional players, delivering a killer run of tracks… “Hell’s Kitchen” and “Lines In The Sand”, the Sherinian co-writes from his DT years, solos from Derek and Ron, the “common ground” cover of Van Halen’s “And The Cradle Will Rock” (with Soto singing most of the song from deep in the crowd), before their own show-closing anthem “Coming Home” brings it to that place!

Musically, this is a first rate performance. Visually, the location is stunning and the video and lighting crew do a superb job of capturing the beauty and intimacy of this unusual venue. Sonically (ignore the YouTube comments and Facebook audio-“experts”!), this is a beautifully captured live performance that stands up with anything in the band members’ catalogues.

If you are a fan, you will want (who am I kidding – you already have pre-ordered) the deluxe art book version, because this is live great package. The band only played one show like this, probably never will again. For me, it also served as a timely reminder of the capabilities within this band, and the musical and live magic they will hopefully have in store for us in 2020.

Released on August 30th, 2019 on InsideOutMusic