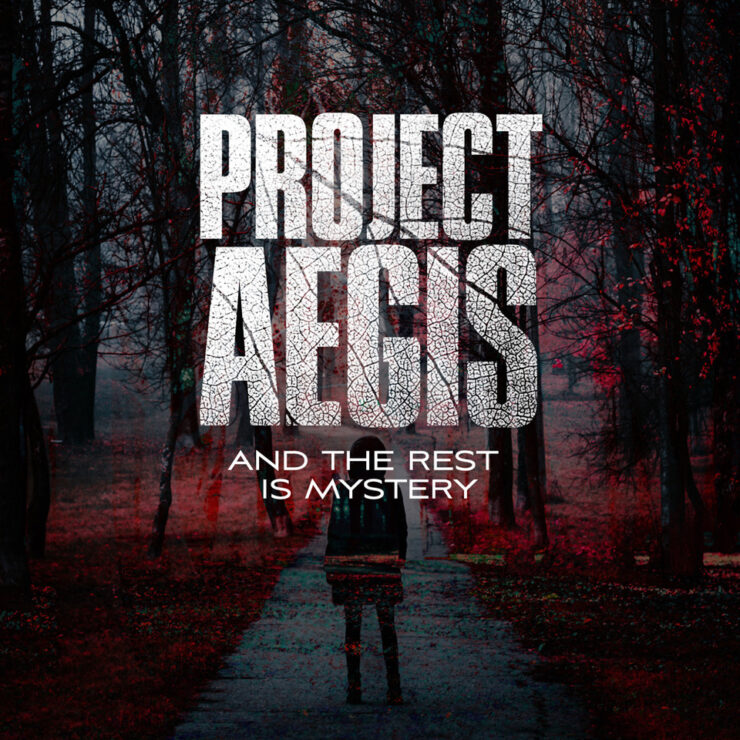 We spoke to writer and producer, Matt Smith, to find out more:

The Prog Report: Many of our readers will know you from Theocracy and your appearance last year on Neal Morse’s Jesus Christ – The Exorcist album. Project Aegis is something that has been active since 2013 – tell us what the idea behind it is.

Matt Smith: It was really conceived by Emil Westerdahl from Ulterium Records (Theocracy’s record label). He approached me a number of years ago and asked if I would be interested in composing a track, with all proceeds from the song going to a charitable cause. I thought this was a great idea, and we decided it would be awesome to involve some great singers we both admired which took it to another level. That first song was called “Collide And Spark” (2013) and that was followed by “Angel In the Ashes” a few years later. Now here we are again!

TPR: So the new track, The Rest Is Mystery is out now. How did this one come about?

MS: Basically, I wanted to write something for Neal Morse. So that was the genesis, and then, as is typical for me, it sort of grew and grew from there. This one has been a long time in the making – I’ve been trying to get it done for almost two years!

TPR: When people buy this single (see links below) they will be supporting a great cause. Can you tell us about that?

MS: All proceeds from “And the Rest Is Mystery” go to a great nonprofit called Legacy Music, which offers music lessons and instruments to children and teens from difficult backgrounds: trauma, abuse, foster systems, human trafficking, you name it. Legacy Music is run by Ted Leonard (Spock’s Beard, Enchant) and his wife, Denise and it’s really a great thing they’re doing. I never ask people to buy my music, but with Project Aegis I feel comfortable doing it, because not a cent goes to me. People can buy the download and help make a difference for a kid who needs it – and, of course, I’d encourage everyone to do that.

TPR: As with all of the Project Aegis songs, you have a great cast of vocalists and musicians. How do you decide who sings / plays what?

MS: I usually begin with an initial wishlist, and some of those people work out and some of them don’t. Looking back, the way the songs have ended up, I can’t envision them with anyone other than the people involved! Each participant honed and owned his or her parts and turned each song into something even cooler than I’d originally imagined. There’s a lot of batting names back and forth between me and Emil, and it really just comes down to who will sound great on what part. And I have to say, everyone involved in each of these songs freely gave of their time and talent to make it happen, just in the spirit of what we’re trying to achieve. It’s a really cool thing, and I appreciate it so much.

TPR: You’ve managed to secure Neal Morse for this track. When did you first meet Neal and how did you end up working with him?

MS: I first met Neal years ago in Nashville, and I spoke with him again after several of his shows. He’s one of my all-time favorite songwriters. I almost never use the “genius” word for musicians, but I think he is one as a composer. To be frank, I’m a bit of a fanboy— “Wind At My Back” was our “first dance” song at our wedding— but I try to keep the effusive gushing in check and not let on too much, ha ha! Anyway, eventually he asked me to do a little guest vocal spot at MorseFest, so we’ve emailed a few times over the years.

I began writing the first part of this song completely with him in mind: I wasn’t going to go forward with it if he couldn’t do it. So I sent him an email, and he said, “Sure, I’ll check it out,” and then he said, “It’s actually good that you contacted me, because I’m casting this musical at the moment and would love to have you try one of the parts if you’re interested,” which is how I ended up doing the musical. Then we performed, recorded and released this entire musical, and now finally, a year later, the song is coming out!

It’s a big honor for me that he did it; not only because he’s so great, but he’s also one of the busiest people I’ve ever met. So it meant a lot that he made the time. He has a wonderful heart, and I have the utmost respect for him.

TPR: The last Theocracy album, The Ghost Ship, came out in 2016. You’ve played some live shows with the band recently so can we expect a new album any time soon?

MS: The honest answer is that I don’t know. I had a bit of an extreme burnout over the last couple years; I think everything finally caught up with me at once. From Theocracy stuff, to all the recording and mixing I do for other bands, to constant travel for shows or work…not to mention the first ten years or so of the band, where I slept maybe four hours a night on average (if I’m being generous) to try to make the band happen while working exhausting full-time jobs. I guess I finally hit a wall, and it all stopped being enjoyable.

I always said Theocracy would do our best to never release a throwaway track, so I’ve been manic about trying to maintain a certain level of quality. We’ve released four pretty lengthy, dense and jam-packed albums, plus all the Christmas songs and everything else, so it adds up. We’ve accomplished ten times more than I ever dreamed: I just wanted to write the best songs I could and record them for my friends to hear. I’ve been incredibly blessed. Anything from here on out is just a bonus.

Thanks to Matt for talking the time to talk to us. We encourage you to help support Legacy Music/ Project Aegis, by purchasing a download of the song from the links below.