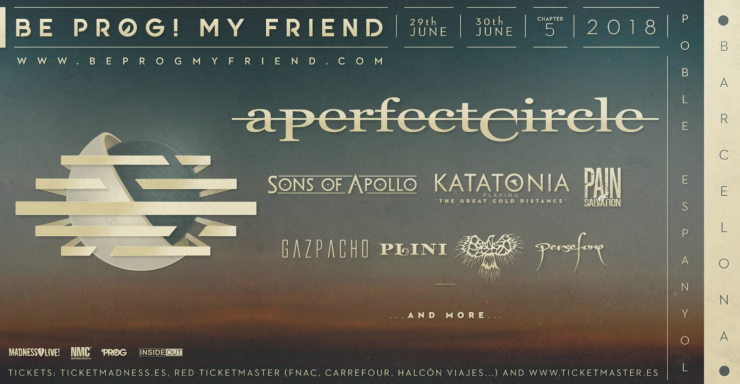 A Perfect Circle have been revealed as the headliners for Be Prog! My Friend festival 2018. The band who recently shared new song’ The Doomed’ will release their first new album since 2004 next year. The festival comment:

‘With A Perfect Circle’s new album out in 2018 it is the ideal time for them to play at Be Prog! My Friend, where we cannot wait to see them live. Really, we could not be more excited with having them as our biggest ever headliner. You cannot miss this edition of the festival. Tickets are going to sell fast!’

Named as the ‘Event of the Year’ at this year’s Progressive Music Awards the Barcelona based festival, sponsored by Inside Out Music, have also announced that Swedish melancholic metallers Katatonia will perform their 2006 album ’The Great Cold Distance’ in full, continuing the trend of special band sets at the event. Drummer Daniel Moilanen states:

‘In the quiet cold of late June we fix our eyes on the scorching Catalonian sun as Katatonia return to Barcelona and Be Prog My Friend. To celebrate this and to increase coldness, the wings of ‘The Great Cold Distance’ will once again unfurl. Are you in or are you out?’

They will also be joined by Finnish psychedelic black metal outfit Oranssi Pazuzu. The festival organisers have described seeing them live will be like ‘diving in to an unlit and terrifying ocean, and we really recommend you come and live the experience with us.’

With more artists to be announced soon the line-up for Be Prog! My Friend 2018 now features A Perfect Circle, Sons of Apollo, Katatonia, Pain of Salvation, Plini, Gazpacho, Oranssi Pazuzu and Persefone.

Be Prog! My Friend which has played host to the likes of Opeth, Steven Wilson, Anathema, Devin Townsend, TesseracT, The Pineapple Thief, Magma, Agent Fresco, Camel, Meshuggah, Katatonia, Riverside, Ulver, Animals as Leaders, Ihsahn, Alcest, Jethro Tull and Marillion will take place on 29th and 30th June next year.
Held in the beautiful open air surroundings of Poble Espanyol – a huge stone built architectural museum – the site is one of the most important and striking landmarks of tourism in Barcelona. Whilst by day the Catalonian hotspot may play host to some of Barcelona’s most interesting historical articles, by the end of June it will instead play host to some of the world’s finest progressive artists.

Tickets are on sale now priced at 130 Euros alongside exclusive hotel deals from the festival website:
http://www.beprogmyfriend.com/