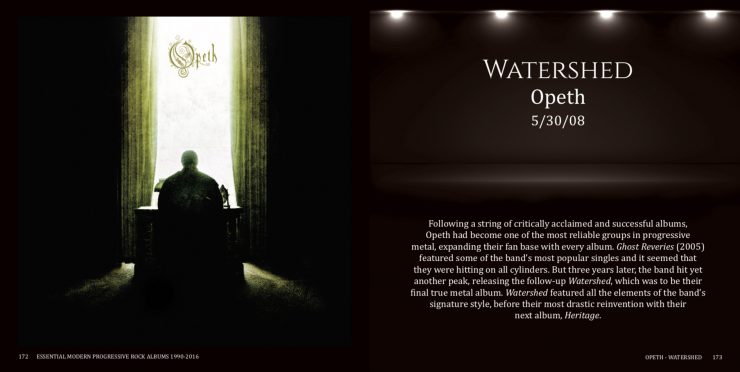 May 30th, 2008 marked the release of a significant album in the vast Opeth catalog.  Watershed was released that day and would mark the final album to feature what had then become the band’s signature sound.  In the book Essential Modern Progressive Rock Albums, leader Mikael Åkerfeldt talked about the album’s significance.  Here is an excerpt.

“That was a fun recording again. We had a new line-up, in this case, we had a new drummer. Axe [aka Martin Axenrot], our drummer, came in for that record. That was his first. We had struggled so much with the drums for years and I was extremely tired. I didn’t like recording at that point. We went into the studio with Watershed and I couldn’t come down at the same time as the other guys. I came in a few days later and they had already cut a track and I was like ‘wow, that never happened before.’ So it was a really smooth, fun recording; good songs, some crazy ideas for that record, a fun, prog metal record with some really interesting things going on there. I think that record came out perfectly and it kind of summarized everything that we wanted to do with that style, which eventually led to us switching things around a little.”

Never a group to avoid taking risks musically, the band was on the verge of repeating themselves if they continued down this road. They had ventured out a little with Damnation and Åkerfeldt could tell it was time to shake things up again after Watershed.

“I felt like we had saturated our own style and it would just be a case of us trying to repeat ourselves, trying to top that record and I didn’t see it as a challenge. I wanted to move on. I saw it as a challenge to move on. I really didn’t want to write that stuff anymore, I was done. That was a watershed moment really, like you really kind of summarized everything that we have been meaning to do for many years, and that record is the epitome of that sound.”

For more on the album, other Opeth albums and more get the book here: Essential Modern Progressive Rock Albums.