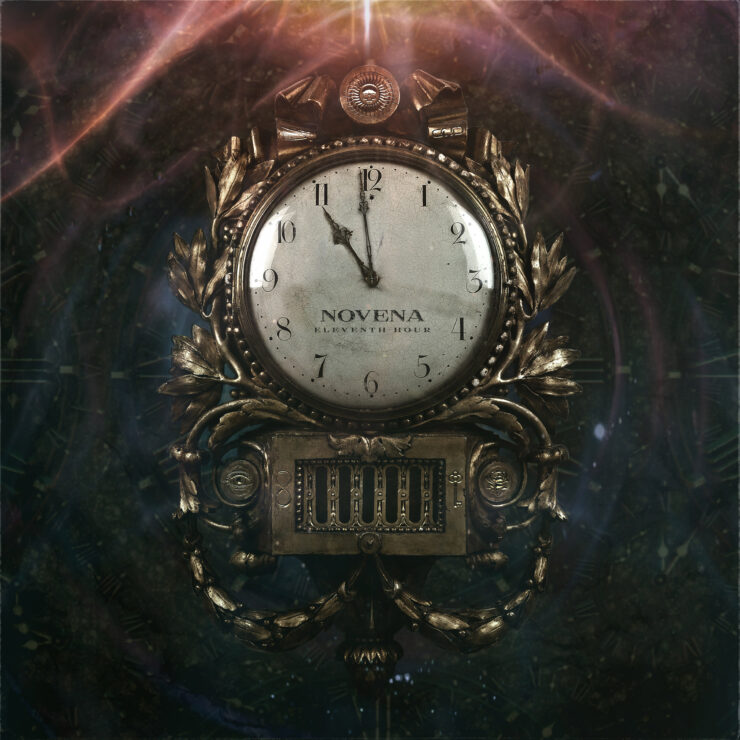 One of the surprise releases in 2016 was the 3-song EP from Novena, a unique prog-metal group that had Haken frontman Ross Jennings as lead vocalist. Somewhat unexpected, the EP got great reviews and set up some expectations for what this band or side project would be. 4 years later comes the full-length debut from Novena titled Eleventh Hour, released on Frontiers Music on March 6th. For any that heard the first single “Disconnected” it came across much more accessible and less heavy than the EP, so did the band change their sound so drastically? The answer is a resounding HELL NO. The result is actually something even more impressive. Eleventh Hour is 72 minutes of borderline insanity when absorbed as a whole, and a definite contender for many end of the year ‘Best Of’ lists.

Fans of Haken will find some things familiar, certainly influenced by Ross’s unmistakeable vocal style. There are also some musical themes that would easily work on one of the earlier Haken albums like Aquarius or Visions. There are also growl vocals spread out sporadically, and elements of Latin music, Jazzy moments, ball-busting death metal grooves, and beautiful orchestration. All of this is mixed in together for an album that is highly entertaining. Without giving away too much, here is a brief glance into this album.

The first main track titled “22:59” is perhaps the most Haken-esque, featuring vocal harmonies, time signature shifts and heavy guitars. This is really just getting the listener settled. The next track introduces some acoustic guitars and a little bit of the latin groove that appears on the album. Following the single “Disconnected” is the unexpected yet well-placed ballad “Sail Away”. Ross continues to surprise with his ability to fit multiple styles on an album.

With the first half of the album out of the way, we hit the explosive second half kicked off by one of the album’s longer and more proggy tracks “Lucidity”. This song begins with a pretty piano motif before jumping into growl vocals, then some jazzy verses, mixed with some crazy guitar solos and that’s just the first 4 minutes. Next comes the Flamenco-styled track “Corazon”, easily one of the highlights of the album. The middle breakdown is stupendous. The diversity these musicians possess is on full display on this song especially.  Meanwhile, “Indestructible” and “The Tyrant” are both really heavy tracks that also feature some melodic moments, all leading to the brilliant and epic closing track “Prison Walls” that will leave you mesmerized.

This album is a must-listen not only for Haken fans but any prog metal fan in general. It is interesting, adventurous, heavy and extremely melodic as well. Novena are on to something. Let’s see where it goes from here.