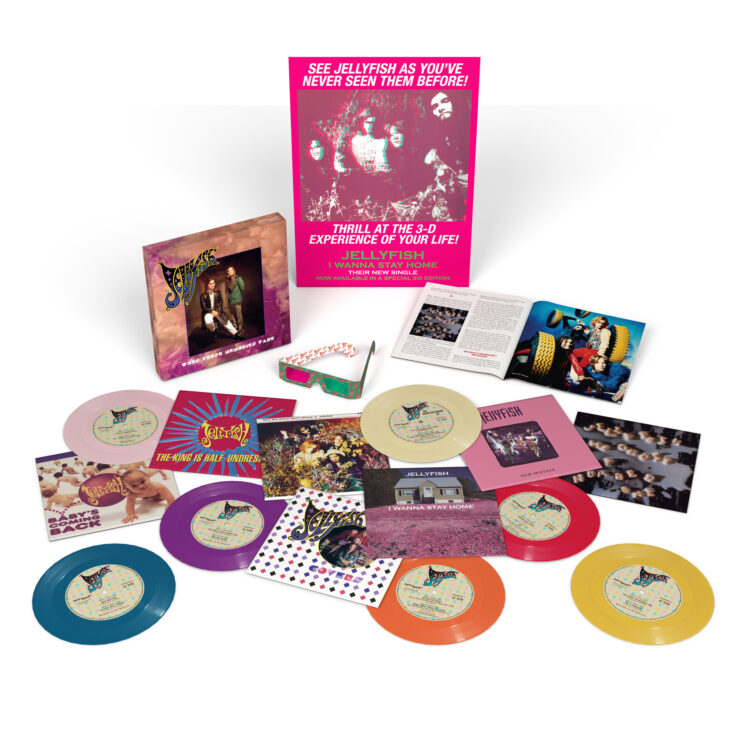 This is the first ever Jellyfish vinyl box set and is limited to 1,000 copies only.

Reissue label New Land + celebrates the singles career of enigmatic ‘90s US rock band Jellyfish with the release of When These Memories Fade. This is the first ever Jellyfish vinyl box set and is limited to 1,000 copies only. Inside are 7 remastered multi coloured 7”s spanning the band’s original run of singles, a bonus ‘covers’ single exclusive to the Box Set, a deluxe 64 page booklet featuring interviews alongside previously unseen photographs, memorabilia and for the Jellyfish completest, a 3D poster with custom Jellyfish glasses.

Jellyfish formed in the late ‘80s out of the ashes of Beatnik Beatch, a power-pop band that included Bay Area high school pals Andy Sturmer and Roger Joseph Manning, Jr. That band released one album on Atlantic then split up, leaving Sturmer and Manning to their own devices. This resulted in the creation of Jellyfish and with it some of the most sublime pop music of the MTV era, featuring arrangements that demanded to be put under a microscope and witticism-laden lyrics that gazed at the world through a unique lens. Jellyfish existed both within the rock trends of times and apart from them, meshing power pop, arena rock, and whatever other types of music fit a song’s mood in a way that turned each song into its own aural spectacle. “We don’t fit anywhere, and we’re up against a wall all the time,” Manning told the Los Angeles Times in 1993. “It would be very easy to slip into whatever the current fad is and cash in on that movement for as long as it lasts. Fortunately, we’re not associated with anything like that.” Their monster-sized hooks made them a pop band; their arch lyrics fit them in snugly alongside the too-cool-for-school modern rock crowd; they had a respect for the pop-rock titans who had preceded them, as proven with covers of Wings, Argent, Badfinger, Styx, Elton John, and other album-rock stars they ’d stick into their live sets.

Jellyfish’s two albums, Bellybutton (1990) and their magnum opus Spilt Milk (1993), made clear that Sturmer and Manning were leaders of an album band—the songs flowed and crashed into one another, making each long player its own self-contained universe. But their keen knowledge of pop’s inner workings, and the minute detailing that they gave to each song, made them undeniably a great singles band as well. Looking at them through this series of seven 7-inches, we see a group who could create perfect power pop that had allegiances to the Beatles, ELO, Wings, XTC, Queen, Supertramp and Todd Rundgren.

From their very first single ‘The King Is Half-Undressed’ through to gems like ‘Baby’s Coming Back’, ‘New Mistake’, ‘Bedspring Kiss’ ‘I Wanna Stay Home’ and ‘The Ghost At Number One’, these beautifully presented singles show us how on the money Jellyfish really were.

Disc 1
The King Is Half Undressed
A. The King Is Half Undressed
B. B. Calling Sarah
Disc 2
Baby ’s Coming Back
A. Baby ’s Coming Back
B. All I Want Is Everything
Disc 3
The Scary Go Round EP
A1. Now She Knows She’s Wrong
A2. Bedspring Kiss
B1. She Still Loves Him Live
B2. Baby Come Back/ Baby’s Coming Back ( Live
Disc 4
I Wanna Stay Home
A. I Wanna Stay Home
B. Jet Live At The Hard Rock Cafe, San Francisco, 1991
Disc 5
The Ghost At Number One
A. The Ghost At Number One
B. B. All Is Forgiven
Disc 6
New Mistake
A. New Mistake
B. He’s My Best Friend
Disc 7
Covers
A. No Matter What Live at Roxy, Hollywood, October 25th 1990
B. Think About Your Troubles Recorded February 1994 in North Hollywood, CA