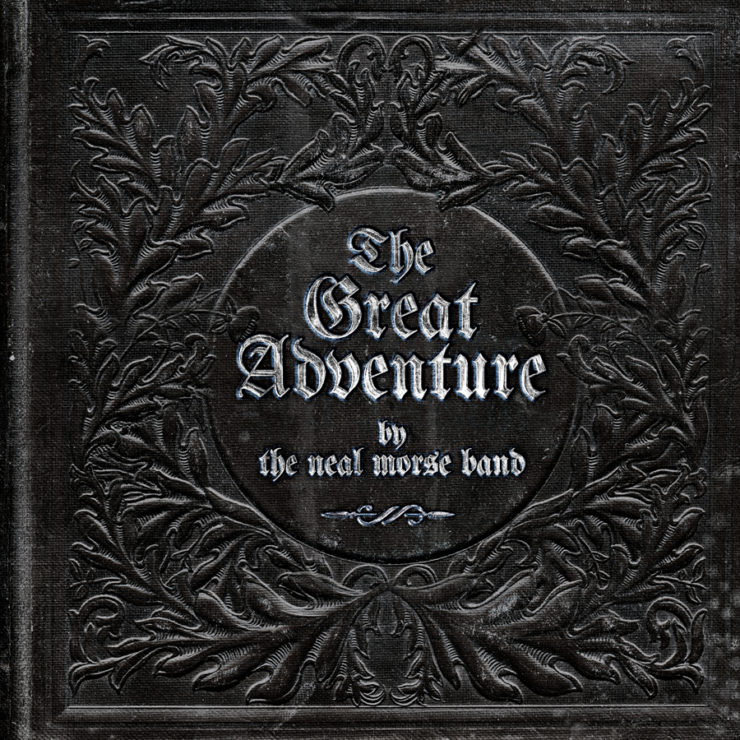 If you have ever seen an art masterpiece, you will appreciate that art is not a competition, and it is impossible to compare works of art or music. When is one artwork is better than another? And when can an artwork be described as ‘perfect’? Even if one were able to identify perfect art, how would that artist approach the next work? When Michelangelo finished the Sistine Chapel, how did he surpass that flawlessness in his next fresco ‘The Last Judgment’? When da Vinci completed ‘The Last Supper’, how did he approach his next painting, the ‘Mona Lisa’? Indeed, when Pink Floyd completed ‘Dark Side of the Moon’, was that perfection not daunting to the band when preparing ‘Wish You Were Here’?

This question must have vexed all these great artists. And it must surely have vexed the Neal Morse Band (NMB) when deciding how to follow up their universally lauded concept album ‘The Similitude of a Dream’ (TSOAD). Certainly there are some that hold the opinion that TSOAD is a classic, and this opinion undoubtedly weighed heavily on the band when deciding how to approach its follow-up. But art is not a contest. As pointless as it is to compare music, it would be futile to compare any album by these Prog masters with their subsequent album, even if it shares a concept. Whether a ‘sequel’ or not, music should be judged on its merits only. Comparisons are odious.

Speculation was rife for two years about what form the follow-up to TSOAD would take, and yet it seems so obvious now. That superb album ended with the words ‘Let the great adventure now begin…’ Of course the follow-up was going to be ‘The Great Adventure’ (TGA), and whether these fine musicians had planned that from the outset (even subconsciously), now becomes irrelevant. TSOAD was comfortably Morse’s most successful album, and with so much at risk, the easy route would have been deliberately not to follow up TSOAD with a Pilgrim’s Progress-related album, rather just to take a breather from the concept and produce a good stand-alone release of unrelated songs. But since when has Neal Morse ever taken the easy route? He is remarkably like Michelangelo and da Vinci in that way.

TGA takes Bunyan’s novel and re-interprets the story from the perspective of Christian’s angry, abandoned son, Joseph. It is another double concept album, and its story is closely linked to TSOAD’s. But it is somewhat darker and more truculent, at least in the first part. And it stands alone, despite its ‘sequel’ status, and thematic recurrences.

So the final vocal line of TSOAD becomes the opening stanza of TGA. But while the TSOAD line was delivered in a resolutory way, filled with conclusive hope, the mood in which it is delivered now is the opposite – it is a surreal cry of such sorrow that you might expect it from a solitary child left in a swirling landscape of wasteland and wilderness. It is bleak yet beautiful, and it shows Morse’s uncanny ability to turn a melody from sweet and reconciled, to sombre and foreboding, at a flick of his baton. The mood is set, and the anticipation as to what contiguous journey we will be taken on, is soon met with an overture such as only Neal Morse fans can expect. It contains everything, and is one of the best preludes Morse has produced.

The album comprises 22 constituent tracks that segue into each-other to create a layered thematic presentation. Each is not as much a ‘song’ as it is the next inspired musical idea that flows on from the last – like Michelangelo’s great portrayal, with dozens of interlinked ideas and characters. This is a huge musical fresco comprising new and recurrent themes, using the band’s usual proclivity for expansion, variation, emotion, melody, crunch and, of course, shredding. It is almost beyond belief that Morse can still come up with such unique riffs and melodies at this point in his career. The multifaceted style is retained, and the artistic innovation is taken to the next level, as has always been Morse’s way. Imagine translating the detailed stories and characters depicted on the Sistine Chapel (or indeed Bunyan’s novel) into a musical presentation, and you will get the idea.

‘Overture’ presents the new treatment of TSOAD’s closing refrain and then, with a great unveiling, the Grand Masters of Prog, in all their prolific glory, are back. This confers the lead-in to an album filled with challenging but typical variation of melody, weight, color, emotion and complexity. The trademark cello motif that recurs throughout TSOAD appears again in TGA in various guises. But so do many new ones, including the ‘Welcome to the World’ motif. The song itself is a classic NMB portrait of the abandoned son. However, what immediately strikes the listener on progressing further is the darker edge to Morse’s vocals (and the band’s in general), and the moodier instrumentation. There is massive exploitation of the various vocal talents in the band – Hubauer’s voice is prevalent from track 4, and Gillette’s throughout. Portnoy also expands his vocal exploits with regularity, and not just in the heavy parts.

Where TSOAD’s musical themes are reprised, it is with a different, often darker, outlook, using minor keys and other re-interpretations. The new TGA themes, which are ubiquitous, are authentic and original. Both discs are impressively consistent, but deliver a new aggression and attack. They are faithful to familiar themes, but innovate with some joyful new experiments, melodies and quirks. It feels like the Renaissance – you recognize and love the previous works, but you are also given a new expressionist gallery in which to marvel. TGA assails the listener’s various emotions unceasingly, eliciting joy and anger, fear and release, and every mood in between. There are myriad highlights, and while I can only remark on a few, be assured, dear Connoisseur, that this exemplary collection contains dozens of masterpiece moments.

The brilliance of ‘A Momentary Change’ and ‘Dark Melody’ stand out in the first suite, with spiraling keyboard and guitar riffs lifting the Prog mantle as high as NMB have ever held it. The former is resplendent and perfect Prog, and the latter is a masterclass in the creation of sinister musical suspense. These two pieces certainly reach the heights of TSOAD, but in a different way – the son’s confused resentment is contrasted with the Progressive stylings of the instrumentation, and therefore beautifully exposed. This section represents a culmination of everything we have come to expect from NMB. Joseph’s bewilderment becomes your aural satisfaction. A journey of reprised emotion proceeds with the church organ of ‘To The River’, leading you thereafter from mood to mood, such as you would feel at a Rembrandt exhibition. The title track’s galloping melodies and driving power make for a wonderful rocker, which will no doubt see Morse running off stage and heading for the audience. It has a relatively straight-ahead, audience participation groove. There is ‘resolution in the air’, as the lyrics state, and it is glorious. Joseph’s quest then leads him to threatening ventures in black, jolly and jazzy lies, sage encouragement, and the searing decision to seek the truth.

One expects luminous melodies entwined around unexpected time signatures, potency, prodigious performance and intricacy – the full palette of NMB Prog excellence. And it is delivered as expected. But it is the Cezanne-like intensity with which the delivery takes place that is remarkable. Disc 1 is a stupefying, swirling palette of emotions. If Van Gogh had been a musician today, perhaps his work would have sounded like this – dark and detailed ideas expressed in extraordinary colors. One is certainly left satisfied and expectant.

Disc 2 starts majestically and immediately surrounds the listener with a more joyful aspect and melodies that are not as pensive as they are hopeful. But they are no less labyrinthine, and the color mix is as extensive. The overture is stirring, studied and serene, until Gillette’s guitar shreds it like a sculptor’s tool. Could disc 2 proceed to deliver what the second disc of TSOAD did? Irrelevant though that question may be, it is answered emphatically by the band with something akin to pre-Raphaelite intent. There are many, many highlights – here are a few to relish:

‘Long Ago’ is that point of dulcet perfection, now routinely demanded by NMB fans, where Morse almost abstractly creates an angelic new melody that will haunt you forever. It is as beautiful as Monet’s ‘Water Lillies’. Hubauer provides an exquisite mosaic piano riff behind Morse’s acoustic guitar, and the band builds this captivating image into a rising swell of magic and emotion. ‘Fighting With Destiny’, every Prog-metal fan’s dream, breaks the serenity with the heaviest riff on the album (and possibly in Morse’s redoubtable catalogue.) The Statue of David just lost its head.

Don’t expect ‘Ways of a Fool’, but ‘Vanity Fair’, referencing Bunyan’s demonic enclave, is quirky and poppy. The band bounces and bobs, Picasso-style, in a carnival-like curiosity hall of mirrors. The jaunty circus festival ending deceives you into complacency, because gravitas awaits in ‘Welcome To The World 2’ – the theme transformed into sniping metal. This is as heavy as the Colossus of Rhodes.

‘The Great Despair’ will rightly be regarded as ‘the’ big epic moment on the album. It reprises, without repeating, the emotion evoked by TSOAD’s climax. It is the massive, expansive, sky-kicking apex, again featuring Gillette’s spectacular vocals and another (but different) ‘Oh Yeah’, reminiscent of the now famous ‘Come on!’

Expect familiar colors, but also a dipping of the brush into a new palette of darker taints. For example, ‘Freedom Calling’ reprises parts of TSOAD (though not the part that its name would suggest), before taking the motif to a completely different place, creating another epic of anthemic proportions. Closing track ‘A Love That Never Dies’ is a triumphant Morse melody on which Morse’s and Gillette’s vocals combine to create a beautiful icon of deliverance, of which Dante would be proud. Joseph crosses the River through the Great Divide to deliverance, while Gillette confers vocal passion and guitar from Heaven. Featuring a big choir, it sounds like the angels got together to make a song for God and delivered it in a Cathedral in the Sky. One can just imagine this epic being delivered at Morsefest.

As this massive, cathartic depiction comes to an end, one realizes that it would be irrelevant to contrast this work with TSOAD. Although some will attempt to make comparisons, I see no reason to do so. TGA may be a sequel to TSOAD, but it is, more importantly, its own musical progression on a theme. Why would you compare chapters 1 and 2 of a book with chapters 3 and 4? There are parts that are better and parts that are not, but that is immaterial. This work stands alone as its own perspective on a concept, with its own creativity, thematic progressions and instrumental perfection. While often re-investigating TSOAD themes, TGA is, of itself, an independently ascendant and consummate tapestry. If it were not about Christian’s son, you would probably enjoy it just as much, and the fact that you may have heard some of the motifs before, delivered in a different way, just adds to the lustre. Claude Monet’s paintings were always part of a series. Sometimes he would just paint the same scene in different lights, hours of the day, or seasons. Yet the paintings were never the same.

Is TGA a worthy follow-up to TSOAD? Absolutely, but that is not the point. The point is that Neal Morse Band is a group at the top of its game, doing, with immaculate consistency and persistent innovation, what it does best – the creation of mellifluous but tough Progressive Rock, at its finest. Somehow, without repeating himself, Morse and the band continue to find new ways to feed our musical souls. Maybe that is the true definition of perfection.