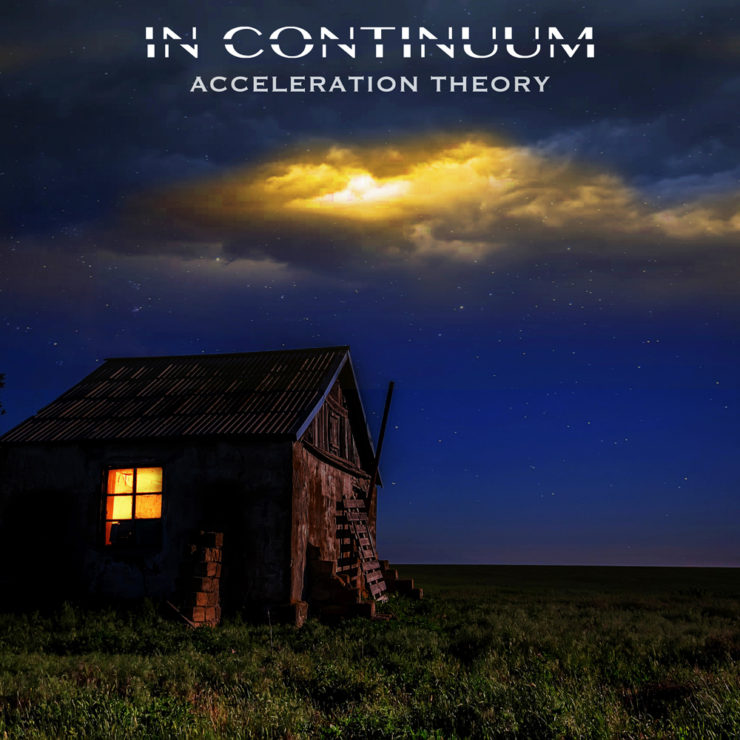 Review of the debut album by In Continuum – ‘Acceleration Theory’ out now.

There’s no better way to start off a year for a progressive rock fan than with a new supergroup. Dave Kerzner, well known from Sound of Contact and his growing solo career, announced his new project In Continuum last year. Joining this new musical outfit are vocalist Gabriel Agudo (ex-Bad Dreams) and Randy McStine (The Fringe, Lo-Fi Resistance), along with former Sound of Contact member Matt Dorsey on bass and the ubiquitous Marco Minnemann on drums as well as a handful of more than special guests. While leading the writing of the album, Kerzner shares composition duties throughout, even incorporating some music co-written with his former Sound of Contact bandmates that was meant for that group’s second album that never happened.  There is definitely a stylistic similarity to the Sound of Contact’s Dimensionaut release from 2013, and Kerzner proves just how much he had in that group’s sound with Acceleration Theory.

Acceleration Theory is a concept album about, to put it succinctly, an interstellar Romeo & Juliet styled romance story. It’s tough to put such a big and ever present story in few words so I encourage the readers to read Kerzner’s explanation of it in the CD’s liners as he did a better job explaining the concept than I honestly ever could (he’s the creator after all). It’s a great sci-fi drama that adds a lot to the music itself. However, that’s not the only thing they focused obviously as we’ll be looking on the music side of In Continuum’s debut album – track by track.

It doesn’t matter what album you’ll hear for the first time, you’ll always have an expectation. Acceleration Theory takes advantages of everyone’s expectations and plays around with it. It begins with an instrumental track that’s right out of a movie score. Beautifully orchestrated – with real instruments – dramatic, dreamy until it shifts. The drums kick in with a powerful choir in the back then the tone is set.

Then the transition to “Crash Landing” is seamless. The track itself opens up with some great drum fills until we get the main riff played by the legendary Steve Hackett, it has that flair that always makes it so recognizable. Kerzner knew exactly what he had to do for his choices of synths during the chorus to make it sound so good (which is also very catchy). If the title track set the tone for the album, this song is a fantastic showcase of what they can do as a band.

“I Remember” is a prog ballad at its core but a lot more in execution. The lyrics are as passionate as the performance. Agudo’s role as one of the main characters is exceptional. We also get our first good taste of an incredible guitar solo by the virtuous Randy McStine. Be glad we’ll get a lot more of his playing further in the album.

One of the highlights of the album is “Two Moons Setting With the Sun”. It begins with the main guitar melody that is then complemented by a tasteful bass line and the perfect drum verses. An incredible touch are the vocals sharing their accentuated melody with the piano, it works masterfully and gives the song an extra attention to detail. The instrumental section features not only great dueling guitars and crazy keyboard parts but drum contributions by both monster drummers in the record – Nick D’Virgilio and Marco Minnemann.

By this point in the record, we already have a great idea of what the concept of In Continuum is about and how they make their music work. How the musicians communicate with each other, the roles in which each of them take is just a product of good direction. “Scavengers” is a track that shows many of all those strengths in just under 4 minutes. With a pronounced piano main theme that progresses throughout the song from slower sections to the incredibly fast ending, this one’s got it all.

“Be the Light” is an amazingly emotional ballad. Even though it follows the underlying concept of the album, you can still relate find either yourself or the character the lyrics and really be invested. This continues to unfold until it spotlights some beautiful guitars by *the* Steve Rothery and an extraordinary crowd choir to close it out.  Agudo’s vocals here are splendid.

Placed strategically in the middle of the record is “Hands of Time”, the longest song of the album. Divided in three pieces, it begins by slowly introducing its cast with a calming and soothing melody, beginning with the string quarter, then the piano, acoustic guitar and so on. Some distant synths really gives you that outer space vibe… Until the electric guitar kicks in with a killer riff. The whole band sounds extremely powerful and heavy in this beginning instrumental section. The second part of the song, The Searching, also stands out. It maintains the energy of the heavy instrumental section while the lyrics circle around. The slightly slower final section has a more Western vibe to one of the previous verses and then finishes the song of with a crazy guitar solo. We don’t get a lot of shredding in Acceleration Theory so this track being as heavy and experimenting as it is is very welcoming.

“Racing Through the Past” is a piano driven instrumental that serves as a segue into the next track “AlienA”. Named after one of the main characters of the story and sung by Leticia Wolf, this song has a completely different vibe to it. Featuring some pop like instrumentation and weird ET lyrics, it didn’t have a great first impression on me but I must admit it has its charm inside the concept of the album. The back and forth vocals between Wolf and Agudo (who channels Peter Gabriel here) makes for a beautiful moment.

A lot more interesting segue this time is “Meant to Be” which not only has references to “I Remember” but features some multi-melody vocals that are performed by Jon Davison and composed by the remarkable Jon Anderson. “Man Unkind” then begins and is a treat to anyone’s ears. Exquisitely orchestrated, everything about this song sounds fantastic. I don’t believe it would be fair to have a “definitive track” in this album due to it having so many different artists featured and not all of them are together in one single song. But if I had to choose one of them, it would have to be “Man Unkind” just because of how well it flows. There’s one last track in the album called “Banished” which serves as an incredible action movie instrumental, adding a suspenseful vibe that ‘something’s about to happen.’

In Continuum achieves something very special here. I don’t imagine it is easy to juggle so many musicians, roles and guests in a supergroup like this and end up with something as palpable and smooth as Acceleration Theory. Kerzner shows he is adept at leading a wide array of talented musicians towards one clear vision. And now that the bar has been set, the only expectation is for Acceleration Theory Part Two.

Get the album here: http://sonicelements.bandcamp.com/merch