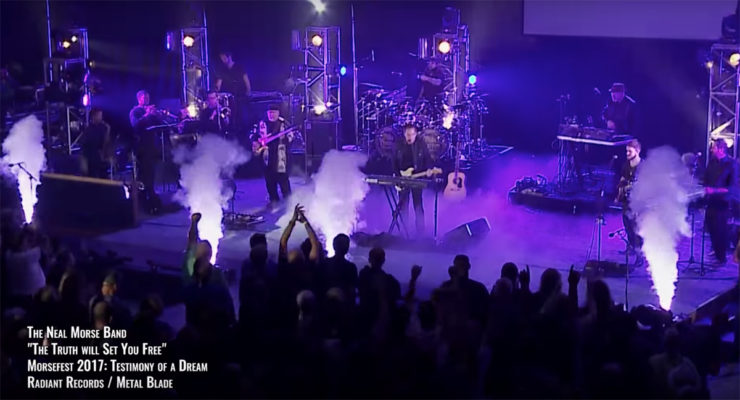 The Neal Morse Band are close to releasing their new album at the start of next year. But first comes the release of the live set from Morsefest 2017: Testimony of a Dream, clocking in over 5 hours of material.
Now you can see the first video from the set for the track “The truth will set you free.”

Digital downloads of the music portion will be available from Radiant Records in uncompressed audio, and on iTunes. The sonically outstanding audio was mixed by the band’s own guitarist Eric Gillette (who also recently mixed their The Similitude of a Dream: Live in Tilburg 2017 release), and mastered by long-time collaborator and world renowned engineer Rich Mouser.

Additionally, a one-hour documentary* will give viewers a fly-on-the-wall perspective at what really happened behind the scenes during this epic event; featuring candid moments from the band, other musicians and the crew: a truly engaging glimpse into the whirlwind of staging such a monumental production. Last, but not least, for the first time ever the versions including Blu Ray discs will feature Dolby Digital 5.1 and DTS-HD Master 5.1 as additional audio options.

Fans can pre-order any of the variants from the Radiant Record page at http://www.radiantrecords.com/