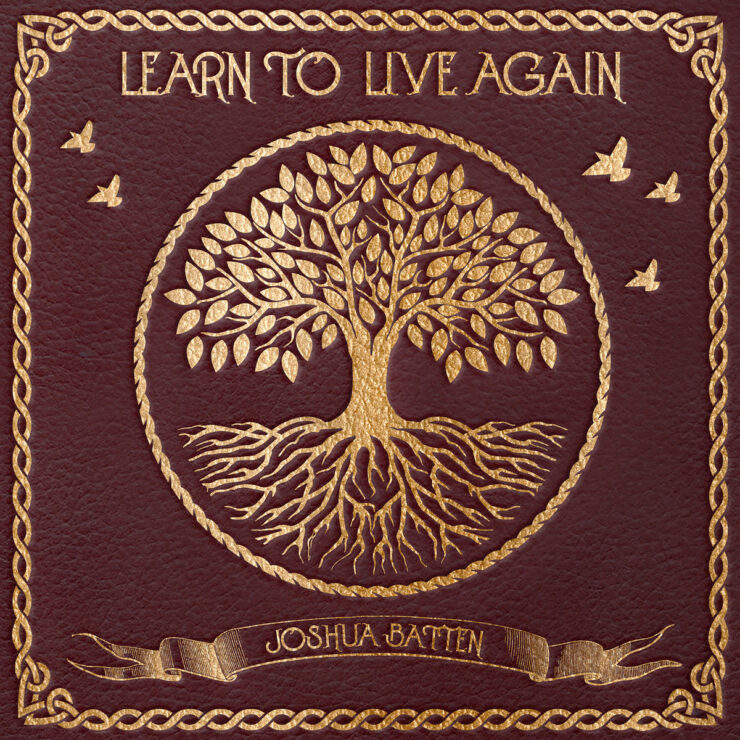 Review of the album by Joshua Batten – Learn To Live Again

Based in Melbourne, Australia, Joshua Batten attended and played on Cruise to the Edge in 2016 (accompanied by his ex-South African father). Obviously the trip of a lifetime for the young Australian, Joshua impressed very many people on that ship. I was fortunate enough to meet him and perform with him on the ‘Late Nite Live’ passenger stage. (Presciently, one of the songs that he performed was the Flying Colors epic ‘Open Up Your Eyes.’) It was, of course, inevitable that I would be drawn to this exuberant young man’s music. I was at the time astonished by his prowess and musicality, and this was made especially so when I learned that Joshua had suffered from challenges regarding neuro-diversity. I have watched his progress with great interest ever since that cruise, and now Joshua’s 2022 album, ‘Learn to Live Again’ has piqued my interest like never before. Through the platforms of music and lyrics, the album describes this young musician’s remarkable personal journey. The themes include the challenges of facing a common but difficult neurological condition and Joshua’s own personal perspective of the Pandemic. The album is dedicated in memoriam to Brian Cherry and perhaps the greatest Prog fan of them all – the late Paul Hanlon.

Divided into four parts, ‘Distress’. ‘Depression’, ‘Assessment’ and ‘Acceptance’, this is a very personal album indeed. Every note in those four suites has clearly been written and delivered with painstaking care and fidelity. The songs have bucket-loads of passion and power, and there is no shortage of technical precision. The album comes with a detailed booklet that describes and explains Joshua’s recent life experiences and the resulting lyrics. It is an unexpectedly elaborate package, created with the frankness and honesty of one who is openly sharing his personal story with the world through his music. It does not get more authentic than this.

‘Learn to Live Again’ is an album that, personal lyrical emotion aside, is also musically very diverse. It is Prog, it is Folk, it is Rock and it is Blues, but with all with a modern feel that is due largely to Joshua’s hybrid style of writing and guitar playing. Imagine a cross between Joe Bonamassa (especially on the song ‘Cut you Adrift’) and Steve Morse (in the rockier tracks like ’Give Up the Throne.’) Joshua’s lead vocal style is also not unlike Bonamassa’s – only with a younger edge. Indeed, the song ‘Waiting for the Moment’ could be a Black Country Communion track (and yes, the vocals are just as good.)

Most tracks, such as ‘The End is not the End’, drip with emotion, but not uncomfortably so. Many present Joshua’s influences, such as ‘Open Box’, which allows Genesis to meet Tears for Fears with a straightforward groove and big production built around Joshua’s fine voice. ‘Fortress’ is also classic Prog delivered at the highest level, with twin guitar harmonies not unlike those of Wishbone Ash in that band’s heyday.

Also worth describing here, ‘Oh Britannia’ is a pastiche that sounds like the Beatles in 2022 with Brian May on guitar. Definitely influenced by Queen, this is a jaunty romp with a message to the Empire from the Commonwealth. Queen-oriented though it is, it could also be Flying Colors at their most poppy.

At the core of the album, ‘Existential Guardian’ is a 14-minute epic that shows the level of proficiency that Joshua has now reached as a Progressive Rock artist. The track contains a reprise of the opening ‘Prologue’, a theme that bookends the album’s fourteen songs perfectly. In odd time signatures and with massive, spacey production, big orchestration and expansive choral vocals, this composition will rightly instill massive pride in the Batten family. Strident and soaring with a wonderful guitar solo, a huge Beatles middle section and a full orchestral arrangement, these elements combine to make for a highly impressive Prog composition. The song is about Joshua’s triumphs against personal adversity, and triumphant it is, on every level. It reminds me of that night when this young man delivered a Flying Colors epic with such aplomb to an astounded audience on a ship.

From Beatles-style pop to Bonamassa Blues, from Flying Colors Prog to Neil Young-style Folk Rock, the album is, in terms of style, one of the most adventurous you will hear. Joshua Batten certainly wears his influences well. Lead vocals, guitar and piano are all delivered by him, and he is accompanied by several other accomplished Australian musicians, all of whom deliver just the right mixture of technique and feel under Joshua’s and Sean O’ Sullivan’s production. The album has a core theme, a consistent thread (intentionally starting and ending in the same key) and track-by-track variation that is fast becoming Joshua’s hallmark.

To be released one week before the International Mental Health Awareness Day, ‘Learn to Live Again’ certainly is an album that is relevant. Its production was consequently supported by the Government of Victoria (‘Creative Victoria’.)

Joshua Batten and his family should be very proud. This ebullient young man, gifted and proficient as he is, has matured into an extraordinary artist. The album might not be perfect, and perhaps the fourteen tracks could have been edited by one or two songs, but there is something here – something new, something very personal and something quite special. If you crave Proggy, catchy hooks tinged with The Blues, glorious melodies, bright vocals and great guitar-playing, all wrapped up in an important message, you should acquire this album. Is there a new Prog star on the Melbourne horizon? Maybe so – personal adversity has its advantages, and high-quality music is one of them. As I said, I am very fond of Joshua Batten, and I am no less fond of his music. This young man’s cause, and above all his art, deserve your attention. They certainly have mine.

cruise to the edge Joshua Batten