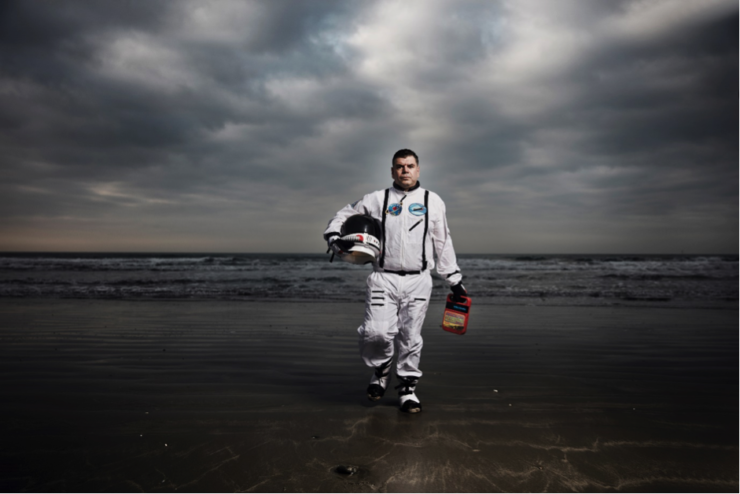 Today sees the launch of the first track taken from the album, and you can watch the video for ‘Ancient Ascendant’ here:

John comments: “Ancient ascendant is a wry poke at and indeed musical equivalent of the famous ‘evolution of man’ picture. We may be evolutionary but we seem to be walking backwards into the swampy quagmire of a synthesized society. Maybe we can learn something from the simpler times and customs of our ancestors even if we can’t learn from their history. This was the first song I recorded for Under Stars and I had a ball recording it!”

The album once again features drums by long-time collaborator Craig Blundell (Steven Wilson), plus bass contributions from Steve Vantsis (Fish), with all other instrumentation on the album delivered by Mitchell himself.

Of the record, John comments: “It is the final part in the astronaut trilogy, and was recorded over an intensive month and a half period. This time I wanted to reference my love of 80’s synthwave pop a little more, so beware the 808! The title is derived from belief that we as humans spend far too much time not noticing the beauty around us and far too much time tethered to technology.”

‘Under Stars’ will be released as a limited edition digipak CD (featuring 3 bonus tracks), gatefold 2LP + CD & as digital album.

‘Under Stars’ is the final album in a trilogy for Lonely Robot, John Mitchell’s visionary project. This began in 2015 with the ‘Please Come Home’ album and continued two years later with ”The Big Dream’.
“I always saw this as a trilogy, and it feels like the third part of the Lonely Robot master plan has reached a natural conclusion.”

As with the two previous albums, there is a theme running across the songs here, as Mitchell explains.
“On ‘Please Come Home’, the theme was about the idea that life on Earth didn’t originate from this planet, while for ‘The Big Dream’, I was really giving everyone the benefit of Zen musings according to John Mitchell. This time things are a little more down to earth. What I am doing is looking the millennial generation, and the fact that kids today are so tied to their phones and to technology. They really have no clue what is actually going on around them, and I find that worrying.”

John Mitchell is a man with a rich musical heritage and history – from musician and vocalist, to songwriter and producer. With bands like Arena, Frost*, Kino, It Bites and Lonely Robot, to name but a few, Mitchell has left his mark on the current progressive rock scene and has been involved in dozens of recordings. He is also a respected producer & mixer, running Outhouse Studios in the UK and working with artists as diverse as You Me At Six, Enter Shikari, Alter Bridge, Asia, Don Broco, Funeral For A Friend, McFly & much more.