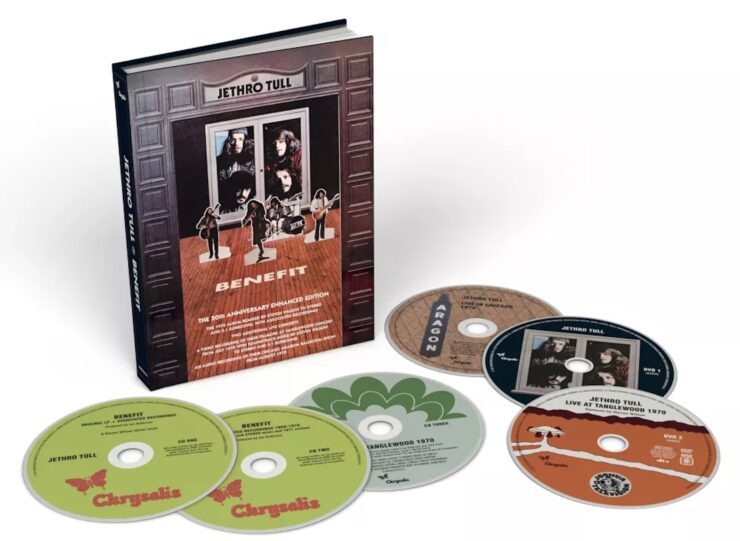 Jethro Tull have announced they will release a new four disc, two DVD 50th Anniversary edition of their 1970 album Benefit

Jethro Tull have announced they will release a new four disc, two DVD 50th Anniversary edition of their 1970 album Benefit, through PLG UK catalog on November 5.

Benefit, the bands third album, was one of only a handful of Tull releases that didn’t receive a new 40th anniversary edition. The album featured Ian Anderson (flute, guitars, vocals), Martin Barre (guitars), Glenn Cornick (bass) and Clive Bunker (drums) who were joined by John Evan on piano and organ, who would go on to play on all of Jethro Tull’s albums throughout the 70s.

Highlights of Benefit (The 50th Anniversary Enhanced Edition) include:

* Original album and associated recordings remixed by Steven Wilson
* Additional associated recordings including mono and stereo mixes of various A and B sides
* The 1970 Fillmore at Tanglewood concert, with new stereo remix by Steven Wilson
* Live At The Aragon Ballroom, Chicago 1970 concert in mono
* Steven Wilson’s 2013 remix of the album, 5 extra tracks in DTS and Dolby 5.1 surround and stereo 96/24 LPCM
* Flat transfers of the original UK+US LP master in LPCM
* Additional tracks Sweet Dream, 17 and The Witch’s Promise
* The 1970 Fillmore at Tanglewood concert on video with Steven Wilson’s 2020 audio remix in stereo and 5.1 surround.

The 100-page book, enclosed within the elegant, hardback book packaging, contains an essay from Martin Webb, who expands upon the 2013 A Collector’s Edition booklet notes. Following that are comments on each of the album’s tracks from, Ian Anderson, Martin Barre, Glenn Cornick and Clive Bunker, as well as interviews with Robin Black (studio engineer of Benefit and many other Jethro Tull albums), Terry Ellis (‘executive producer’ of Benefit), Joshua White who directed the 1970 Tanglewood Festival which features on DVD2, and Steven Wilson explaining the mixing of Benefit in 2013. The masses of anecdotes are surrounded by legions of images of the band and memorabilia from the era.