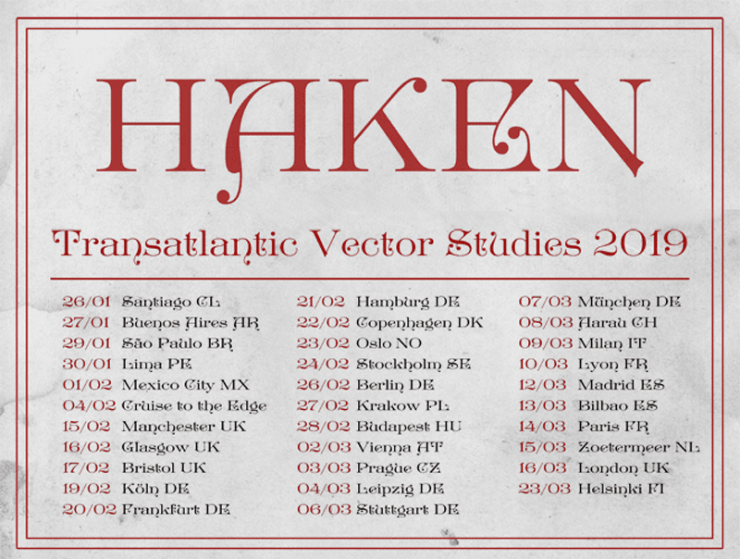 HAKEN, one of progressive music’s most exciting bands, recently announced details of their much-anticipated fifth studio album titled ‘Vector’, due for release on October 26th, 2018. The album was produced by the band themselves, and recorded & mixed by Adam ‘Nolly’ Getgood (Periphery, Devin Townsend Project), with the artwork once again being handled by Blacklake.

Following the announcement of North American tour dates this Autumn, the band are pleased to reveal European & Latin American live dates in support of the new album for 2019. The band comments: “We’re thrilled to be bringing our ‘Vector Studies’ tour to Europe. We had immense fun celebrating our 10 year anniversary across Europe in 2017 with incredible turnouts and warm receptions. This time around we will be focusing on performing tracks from our new album ‘Vector’ along with some live favourites of ours. For your health and wellbeing, the good doctor prescribes you some live Haken. ”

The band add on the Latin America shows: “A visit to South America has been long overdue. Many of our dedicated South American fans have made epic trips around the world to experience our shows in Europe and North America and now we’re ecstatic to reveal we will finally be returning the favour! See you in January! As for Mexico City and Cruise To The Edge, well… we cannot wait to return!”

Full ticket details as well as all upcoming dates can be found here: https://www.hakenmusic.com/tour