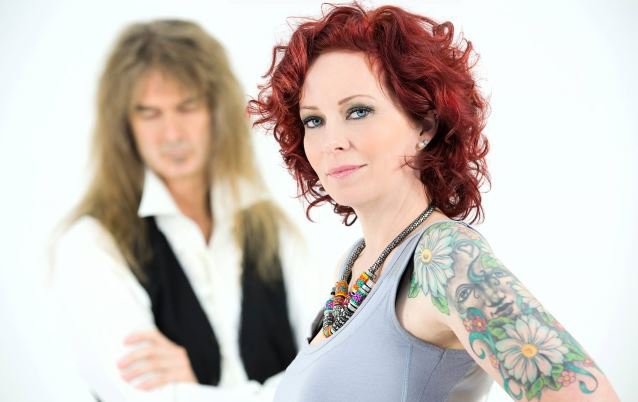 The Gentle Storm, the new project of Arjen Lucassen (Ayreon, Star One, Guilt Machine) and Anneke van Giersbergen (The Gathering, Devin Townsend Project) have released the first single to the upcoming debut release “The Diary.”

Check out the video for the “Endless Sea” here. “The Diary” is scheduled for release via InsideOut Music on March 23rd.

With a working relationship dating back to 1998, two of Holland’s finest musicians have united for a new project dubbed The Gentle Storm.  The album concept is a tale of love, loss, and separation told through the story of two fictional seventeenth-century lovers. A Dutch sailor embarks on a two-year voyage, leaving his wife at home in Holland. The only way for the couple to communicate and keep their love alive during the long separation is through letters. These letters form the basis for the songs on the album.
The Diary double album – close to a year in the making – is an epic production of Ayreon proportions featuring two contrasting
interpretations of the same songs, all composed specifically for The Gentle Storm: acoustic / folk arrangements (CD1 – Gentle) and a full-on metal assault (CD2 – Storm). It also heralds Anneke’s return to the realms of heavy guitars and soaring vocals reminiscent of The Gathering’s breakthrough album, Mandylion. Of course, it wouldn’t be an Arjen Lucassen project without his trademark progressive elements, but he readily admits his main focus was on Anneke’s vocals.
“Anneke’s got an amazing instrument in her voice, and I wanted to showcase that by giving her strong melodies to sing,” says Arjen.”So this time I was hyper-focused on chords and melodies when composing the music. I even wrote and demoed all the songs using one simple orchestral string sound for everything before I started arranging the other instruments. That cheesy demo string sound made every song fight for its life, and only the strongest survived. Working this way has arguably led to The Diary being my mostmelodic album to date.”